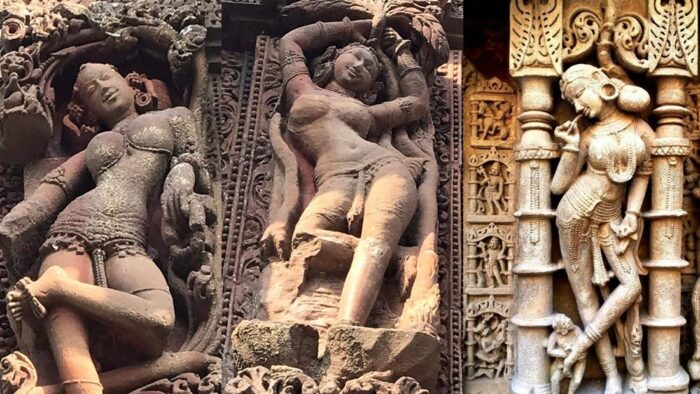 The celestial nymphs of Devlok are closely tangled in knots of boon and bane. A dedicated prayer would often result in a boon, while a deceitful deed would result in the surge of a rage, followed by a bane. The sensuous brew of intimacy between the celestial Apsaras and the desirous humans would often kindle a series of boon and bane introducing new characters and also many subplots to these Puranic kathas. The intense love lore of Apsara Menaka and Rishi Viśvāmitra is a popular Puranic description that approves the existence of honeytraps and the devastating results these arrangements invite as an aftermath. There are many such incidences in the Puranas that have been regretful lessons for all those involved in these alluring deceptions.

Meaning – O! Dear Rambhā, now you have to accept this great task of enchanting Viśvāmitra with a desire triggered by lustful yearning, and a desperate longing to have you.

Apsara Rambhā becomes Indra’s next choice. Hearing about her assignment, Rambhā is reluctant to act on his orders and accomplish the mission. With folded hands she requests Indra not to send her to Rishi Viśvāmitra. She conveys to Indra, her apprehension of Rishi Viśvāmitra being risky and that he would certainly release his wrath on her. On realising Apsara Rambha’s fear towards Rishi Viśvāmitra and her unwillingness to perform the task, Indra calms her. He assures her that she would not go to Viśvāmitra alone. He declares that he would accompany her in disguise by taking the form of a black songbird, along with Kama Dev and with spring in the air. Rambhā with all her concerns and fear is ready to carry out Indra’s command. Rambhā reaches Rishi Viśvāmitra and tries to tempt him with her sensuous laughter and giggles. The entire atmosphere is suddenly filled with the fragrant sway of spring and with the echo of the black song bird’s sweet melody. Rishi Viśvāmitra rises from his meditative state and gazes at Apsara Rambhā . He immediately understands Indra’s malicious desire of spoiling his penance once again through his beautiful celestial agent-Apsara Rambhā. Without wasting much time Rishi Viśvāmitra curses Apsara Rambhā.

Meaning– You tried to tempt me, as I am wishing to win over the spiteful lust and wrathful anger. Your unlucky Rambha, you will become a rock for thousands of years.

Rambhā’s apprehensions are met in reality. She becomes a rock by the curse of Rishi Viśvāmitra. He further continues the utterance by suggesting the way to her liberation from the curse.

Meaning – A highly resplendent Brahman who is ascetically powerful redeems you, oh, Rambhā, who is now blemished by my anger.

Apsara Rambha remained a rock until she was liberated by a Brahmin.

Indra had succeeded in making Viśvāmitra a defaulter in his penance when he fell to Apsara Menaka. Thereafter he planted Apsara Rambhā who failed to impress him but in turn fell to Rishi Viśvāmitra’s rage and attracted the curse of turning to a rock. Rishi Viśvāmitra continued his austerities and meditated near the banks of Dakshin Ganga (Godavari),  thus creating much worry for Indra. Devraj Indra hatched a new plan to distract Rishi Viśvāmitra once again. The Lord of the Devatas Indra, asked all his prominent Apsaras to execute the task of spoiling Viśvāmitra’s penance, but they were too afraid and hesitant to undertake the perilous chore. All knew that the consequences would be disastrous. Finally, Aprara Gambhīrā and Apsara Atigambhīrā agreed to Indra and were assigned the task of tricking Rishi Viśvāmitra.

Aprara Gambhīrā and Apsara Atigambhīrā set out to get an audience with Rishi Viśvāmitra and accomplish the task allotted. They reached Rishi Viśvāmitra who was meditating on the banks of Dakshina Gaṅgā . They engaged themselves in dancing, singing and in using their youthful charm to attract Rishi Viśvāmitra, in order to ruin his penance. All their efforts could only annoy the great sage who had by now managed to develop control on his carnal desires and was not attracted towards the celestial charm of the two Apsaras.

Annoyed with Aprara Gambhīrā and Apsara Atigambhīrā , Rishi Viśvāmitra cursed them to attain a fluid form because they had endeavoured to liquify him. The Apsaras were apologetic for their doings and requested mercy. After much propitiation by them, Rishi Viśvāmitra approved a way to liberation from the curse. He assured them that they could only regain their celestial Apsara forms when the two merged into the Dakshina Gaṅgā river.

Aprara Gambhīrā and Apsara Atigambhīrā, were transformed into rivers as the result of the curse. Upon joining the river Godavari near the  Kālañjara Shiva temple both the nymphs got liberated from the curse. The convergence of the two rivers with Dakshina Gaṅgā came to be known as Apsara Yuga-Saṅgama-Tīrtha. The belief is that a holy dip at this confluence enables Moksha. Bath by any chaste woman at the confluence, ensures that she would mother a son.

There were major hindrances in Rishi Viśvāmitra’s journey to becoming Maharishi Viśvāmitra. The deterrents imaginably were the lack of control on his own senses. Lust, ego and anger, were the beasts that appeared before him in shape of the Apsaras and caused extreme commotion. Apsara Menaka taught him the importance of taming carnal desires. Apsara Rambhā,  Gambhīrā  and  Atigambhīrā attracted curses. These curses were a result of Rishi Viśvāmitra’s uncontrolled fury and ego. Anger and ego were another set of monsters that Rishi Viśvāmitra had to defeat in order to reach his goal. Human desires impulsively attract and deceive, leaving behind regretful consequences. Discipline and restraint are additives that calm the senses and desires for good. Boons and banes are thoughtfully appliqued in the Puranic literary pattern, giving us eye opening insights of the repercussions, a deed could yield.