Tales from the Mahabharata: Vidura Niti – The Learned and the Stupid 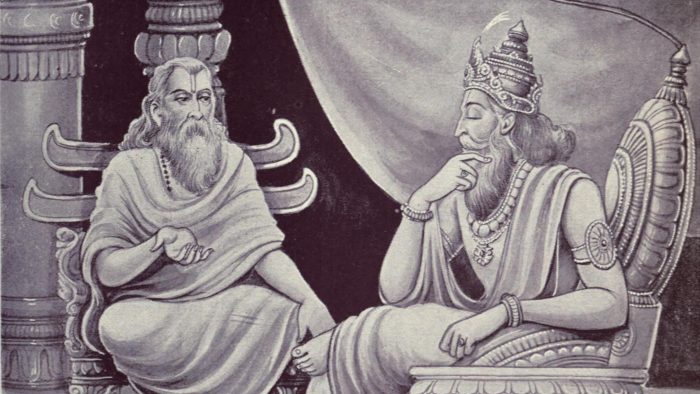 When does sleeplessness take over? When a “weak one is attacked by a stronger enemy, if one’s faculties are weak, if one has lost everything to a lecher or a thief, one is overcome by sleeplessness.”

Such is the start of the counsel given by Vidura to the blind king Dhritarashtra.
Why had sleeplessness overtaken him?
Because Sanjay had taken the king’s permission to go sleep!
Because Sanjay had returned from an unsuccessful journey to Upalavya where he had been sent by the king with instructions to not say anything that would incite the Pandavas to war.
Because, while Sanjay had told Dhritarashtra what he thought, he had still not delivered Ajatshatru’s message for the king, which he would do only in the morning.
The morning that was yet to come filled Dhritarashtra with dread.

In such a state of unrest, he called for Vidura for words of comfort and wisdom.

Thus begins the five-hundred shloka Prajagara Parva of the Mahabharata, also known as Vidura Niti. In the Bhandarkar Institute’s Critical Edition, this Parva is part of the Udyoga Parva and is the fifty-first Parva in the hundred-Parva classification.

After Vidura comes to the king’s inner quarters, Dhritarashtra unburdens to his half-brother that Sanjaya had returned from Upalavya, but had left after berating the king! What little Sanjaya had told the king was enough to fill the king with disquiet. Here is a sample of what Sanjaya tells Dhritarashtra immediately upon his return –

It is worth noting that these were Sanjay’s words, not Yudhishthira’s! It is also quite a comment on the king that he had advisers of such integrity who were able to tell the king harsh truths without fear. A contrast from leaders one sees today.

In any case, it is unsurprising that Dhritarashtra dreaded the morning and Yudhishthira’s message. He asked Vidura to comfort him with words of dharma and what led to welfare.

So who is learned? Vidura tells us the signs of the learned:

• One who does not serve that which is censured.

• He is not an atheist and has faith.

• One whose planned deeds and counsel are not known to others but are known only after the tasks have been executed.

• He whose deeds are not obstructed by cold and heat, fear and affection, prosperity and adversity.

• One who wisely follows dharma and artha, and artha over kama for the sake of the hereafter.

• If not asked, he does not dabble in the affairs of others.

• One who does not deviate from his objective because of anger, joy, pride, false modesty, and a false sense of vanity.

• He decides on a course of action and does not stop before the task has been accomplished.

• He does not waste time and is in control of his soul.

• They exert to the best of their ability.

• They act to the best of their ability.

• They do not hanker after the unobtainable.

• They do not sorrow over what has been lost.

• They are not deluded in times of adversity.

• They perform tasks that bring prosperity. They do not disregard that which ensures welfare.

• He is not overjoyed because of honors.

• He is not tormented because of neglect.

• He is as undisturbed as a pond near the Ganga.

• He knows the nature of men.

• He is skilled in words.

• He can talk about diverse subjects.

• He can quickly explain what is in the texts.

• If a person is poor but proud

• If a person strives for artha without performing deeds

A person with these traits is regarded by the learned as stupid.

Reference: Verses and text sourced from Bibek Debroy’s unabridged, ten-volume, English translation of the Bhandarka Oriental Research Institute’s Critical Edition of the Mahabharata, published by Penguin from 2010 to 2015.