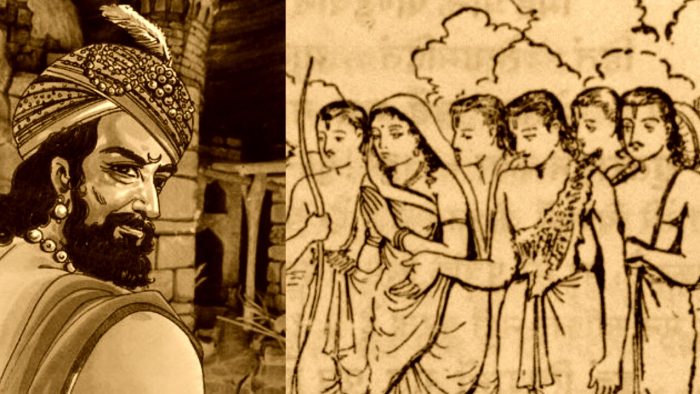 Vidura likens the Kouravas to the forest and the Pandavas to the tigers that reside in the forest. His injunction to the king is to not cut down the forest with the tigers, for the forest was protected by the tigers and it, in turn, protected the tigers. A clarion call for environmentalism that’s thousands of years old, hiding in plain sight within the words of Vidura, in this fifth chapter from Vidura Niti!

Vidura also likened the Pandavas to wood, for just as the energy of fire was hidden in wood and remained hidden till it was not sparked and kindled through friction, when it burned itself and everything else, the Pandavas were also capable of burning through the energy of their noble birth.

Vidura starts off the chapter by enumerating the seventeen kinds of vain and foolish persons that Svayambhu Manu (the first Manu) listed. Vain because they “strike the air with their fists, who seek to bend Indra’s bow, and who seek to bend the unbendable rays of the sun.” Or, put it another way, “they pursue the wind with nooses in their hands.”

As the Mahabharata makes it clear time and again that dharma is subtle, and there is a certain amount of reciprocity to be followed when dealing with fellow human beings, Vidura too makes the point in this chapter:

When Duryodhana was born, Dhritarashtra had asked Bhishma and Vidura whether his son would rule as king, and jackals had begun howling from all directions. This is what Vidura had to say to the king then:

Here, decades later, in the middle of the night, when a pivotal decision stood to be made, and Dhritarashtra turned to Vidura for advice, he had the same words for the blind king:

Neither did the king heed Vidura’s advice then, nor would he do so now. When berating Dhritarashtra over his conduct with the Pandavas, Vidura compared the Pandavas to lions and to the multi-colored feathers of the peacock, and the Kouravas to crows and jackals.

Dhritarashtra asked what was the reason for men not living up to a hundred years, as had been mentioned in the Vedas. This suggests that life expectancy was not a hundred years even in the Dwapara Yuga. Vidura listed the six sharp swords that “sliced off the life expectancies” of beings:

In his words, these were what killed a person, not death.

Vidura talked about the qualities of servants and messengers. On servants, he said that even otherwise loyal and devoted servants could turn against their master if he was always angry with them, if money was given to strangers at the expense of the servants’ wages, and if their due was not given to them. On the other hand, a servant who answered back or argued because of “insolence over his wisdom” deserved to be instantly dismissed.

Coming to messengers, Vidura expounded on the eight traits that marked a good messenger. Some of them were:

Among other traits, a good messenger “must not desire a woman whom the kings want.”

Conversely, how should a king dismiss an untrustworthy messenger? Not directly, but “on some pretext.”

Vidura listed the six qualities that adorned those who ate in moderation – “immunity from disease, long life, happiness, strength, possession of children who are healthy and freedom from accusations about being a glutton.”

Of the five kinds of strengths that men possessed, Vidura counted the “strength of arms” – i.e., physical strength – as the weakest of all. The next three, in ascending order of quality, were good advisers, obtaining of riches, and the strength of noble birth. But the best of all was the “strength that derives from wisdom.” If you have been following this series, you will no doubt be reminded of these lines Vidura told Dhritarashtra earlier:

“The gods do not protect with a staff, like herdsmen looking after animals. They give wisdom to those they wish to protect.”

Here Vidura tells the king that one had been “pierced by the arrow of wisdom” – i.e., the person who had been blessed with wisdom had no need for physicians or medicines, mantras, or benedictions, incantations or successful antidotes to poison: such was the power of wisdom.

Who one must not take help from? Vidura lists them out:

When warning Dhritarashtra about the fate that awaited was the king not to accede to the just demands of the Pandavas, Vidura said that “This anger of Bhishma’s, of Drona’s, and of King Yudhishthira’s, when ignited, will destroy the world, like a white planet that obliquely descends from the sky.” Note that meteors were known even then; that much is obvious.

But this line also tells us that the destruction that could be wrought by meteors was known to people then. For a meteor would not have been described in such terms if none had been known or witnessed to have caused immense destruction.

Finally, Vidura made an astute observation that “he cannot presume to be secure, only because he is a long-distance away.”

Translated excerpts from Bibek Debroy’s unabridged, ten-volume, English translation of the Bhandarkar Oriental Research Institute’s Critical Edition of the Mahabharata, published by Penguin from 2010 to 2015. The translations here are from volumes 1 and 4. The Sanskrit verses are John Smith’s revision of Prof. Muneo Tokunaga’s version of the text, and available online at https://bombay.indology.info/