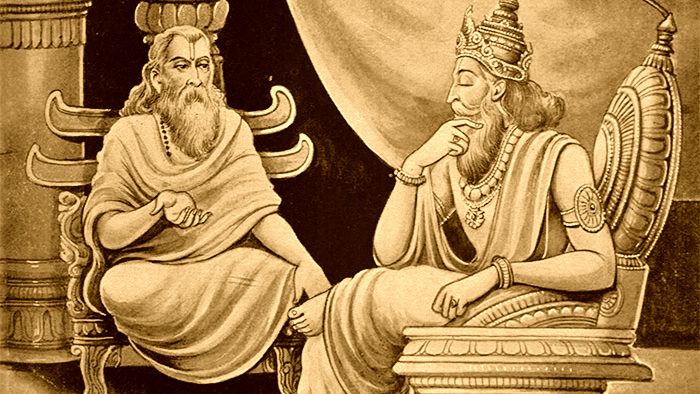 So far we have covered three chapters – 254 of 541 shlokas – or a little less than half of Vidura Niti in the previous six posts. As an aside, Vidura Niti is contained entirely in the Prajagara Parva. The following Parva is Sanatsujata Parva, which is equally fascinating. But coming back to Vidura Niti, in the previous post, Vidura talked of the consequences of lying as a witness using the story of Sudhanva, Virochana, and Prahlada.

In this chapter, Vidura reinforces his point by narrating the history of the conversation between the son of Atri and the Sadhyas to Dhritarashtra. The gods, the Sadhyas, wanted to know from Atreya who he was and to hear words of wisdom and dharma. Among the things that Atreya told the Sadhyas, one was on harsh words. Atreya’s advice was to not retort to harsh words, for that “torments the one who reviles and you enjoy the fruits of his good deeds.”

Atreya said that “one is accordingly colored by one’s associates” – whether one associated with an ascetic or thief. The allusion to the company Dhritarashtra’s son kept cannot be missed here. Enough harsh words had been uttered by Duryodhana in the game of dice, and it is here that Atreya’s words are worth noting:

Remember the verses from the Brihadaranyaka Upanishad (4.4.5) about we being what our “deep, driving desires are”? Vidura Niti echoes the same philosophy, slightly expanding on it:

“A man becomes like the one he converses with, like the one he serves, and like the one, he wishes to be. One becomes free of whatever one keeps oneself away from. By turning away from everything, the least bit of unhappiness vanishes.”

So, just as discipline and will-power are among the signs of the ‘superior’ person (we covered this earlier), Atreya also describes the signs of a ‘medium man’ and ‘worst man’. Some of the attributes of such a ‘worst’ person are worth enumerating (sort of like an anti-pattern in software design!):

Just as a syandan tree is strong enough for chariots’ wheels to be made from its wood, similarly, those born in “great lineages can bear great burdens that other men cannot.”

Vidura then changed to the subject of friends – who is a friend, how does a friend behave, what does he do and what he doesn’t, and so on. Interestingly enough, Vidura maintains that “Whether one is rich or poor, one must always ask favors from friends. Without asking, one does not know whether the friends are deep or shallow.” This reminded me of the English proverb – “a friend in need is a friend indeed.”

Dhritarashtra knew, and acknowledged as much to Vidura, that Yudhishtira had been treated unfairly and that he would destroy his sons (the Kauravas) if they met on the battlefield. This was breeding great anxiety in the king’s mind. Vidura maintained that the only way to get peace, drive away fear, and knowledge was via yoga, intelligence, and service of one’s preceptors.

In a very intriguing metaphor, Vidura compares relatives to threads, long and thin. “When they are joined together because they are many, they can bear a large load. … Relatives are like kindling. When separated, they produce smoke (presumably to mean that while they may inconvenience, they pose no great danger). But when they are together, they blaze.”

Which is why it was important for relatives – the Pandavas and Kauravas – to be united. Just as a single tree, even if large but standing alone, could be brought down by the wind, similarly, a single man was capable of being defeated.

Recall that in an earlier chapter, Vidura had said that the rich often could not savor food (because of diseases), while the poor could obtain taste even from wood, he reinforces the point in this chapter by telling the king that the greatest quality in a person was that he be without disease. Even if one was without the disease, anger was like a headache (and thereby akin to a disease). People afflicted with disease knew neither satisfaction nor happiness.

With this advice, Vidura once again pleads with the blind king to preserve his fame by entering into an alliance with the Pandavas and to restrain Duryodhana.

Excerpts from Bibek Debroy’s unabridged, ten-volume, English translation of the Bhandarkar Oriental Research Institute’s Critical Edition of the Mahabharata, published by Penguin from 2010 to 2015. The excerpts here are from volume 4. The Sanskrit verses are John Smith’s revision of Prof. Muneo Tokunaga’s version of the text, and available online at https://bombay.indology.info/