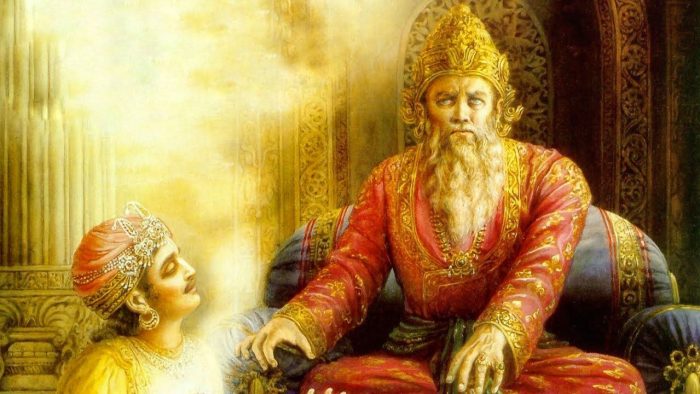 I ended the third piece on Vidura Niti by listing the six who live off six others. Let’s move to the seven. Yes, I am talking about seven vices that a king must avoid. What are they?

Droupadi had some advice to Yudhishthira, on why very harsh punishment, is not advisable for kings. As for dicing, nothing much need be said, though the Mahabharata does reinforce the point through the story of Nala and Damayanti. What about hunting? The commencement of the Mahabharata’s narration owes itself to the death of Parikshit, Abhimanyu’s son, who was said to be addicted to hunting. There is a story there that I have recounted earlier. Drinking? There is the episode of Kacha and Devayani and how Shukracharya had to reveal the secret of Sanjivani because of drinking. That one vice cost the Asuras dearly. Karna had some harsh words to say to Droupadi at the game of dice. He regretted those words later, but the damage had been done.
There are eight causes Vidura lists that cause a man’s destruction. I will skip over this one and go to the second instance of ‘eight’ that Vidura enumerates. The eight that bring delight:

I don’t think they need elaboration.
Vidura then lists the nine gates of the body. They are not explicitly listed, but Bibek Debroy provides us the answer via a footnote:

Finally,  Ten who do not know about dharma:

After this Vidura tells the king about the traits of kings and persons in general. As for the king, he punishes those who commit crimes once the crime has been established. A king will not take a weak enemy lightly, does not “enter into a quarrel over a trifle”, does not enter into a feud when he is weak, nor does he enter into a conflict “with those who are strong”, and so on.

A person who is looked upon with affection is someone who is never arrogant, does not speak of his manliness, “does not utter harsh words in a moment of forgetfulness”, is neither excessively arrogant nor excessive humility, does not rejoice excessively at his own happiness nor at the unhappiness of others.

A person regarded as “foremost among wise ones” eats in moderation but gives before eating himself, will give even to enemies if asked, he neither reveals his counsels nor reveals his “desires, intentions and motivations” to others, has friendships with equals, has a “matrimonial alliance with an equal”,

After expounding on what are the characteristics of a person who is “honored by the gods”, Vidura concluded with asking the blind king to return to his brother’s sons their “rightful kingdom”. This concludes the first chapter of Vidura Niti. How does Dhritarashtra respond?

Does he accept Vidura’s advice? No, of course, not! We know nothing of that sort happened. But Dhritarashtra had more questions for Vidura. We shall cover that in the next part.

Verses and text are sourced from Bibek Debroy’s unabridged, ten-volume, English translation of the Bhandarkar Oriental Research Institute’s Critical Edition of the Mahabharata, published by Penguin from 2010 to 2015. The verses here are from volume 4.

Explore Tales from the Mahabharata: Vidura Niti  Part I,  II, and III