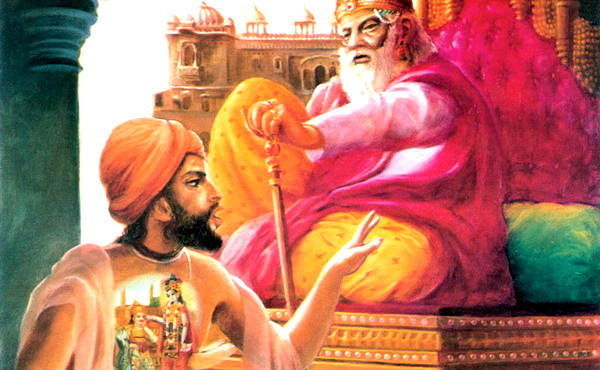 Number play – that’s where I ended the second article on Vidura Niti. Vidura spoke to Dhritarashtra about using the one – intelligence – to differentiate between the two – right and wrong – to bring the three under control – friend, foe, and neutral – and so on. Let’s pick that up, with some repetition, for the sake of continuity.

I had asked what was Vidura referring to when he talked about the two and three in all these statements?

Who does the earth destroy? “A king who is not aggressive, and a brahmana who has not dwelt away from home.” The brahmana is supposed to go on pilgrimages, that is why. Why such a king would be destroyed need not be elaborated.

Who are the two kinds of men who are established above heaven? “Powerful ones who are forgiving, and generous ones who are poor.” Earlier, Droupadi had something to say about forgiveness to Yudhishthira, and which I covered in an earlier article.

As for generosity in the poor, there is the account of the poor brahmana and his family’s generosity that has been retold by the mongoose at Yudhishthira’s Ashvamedha yagna (in the Ashvamedhika Parva).

Who are the three that cannot own property? A wife, a slave, and a son.

Starting with twos and then threes, Vidura takes it a notch higher.

Narada’s advice to Yudhishthira is one example, as is the example of the Chirakara (recounted in the Moksha Dharma Parva), but that is more of a contrarian example. Perhaps an exception that illustrates the rule? After all, there is nothing that is straightforward in the epic!

Who are the four kinds of people who should dwell in the house of someone following the dharma of a householder? “A relative who is aged, one who is born from a noble lineage but is in distress, a friend who is poor and a sister who does not have offspring.“

What are the four things that bear instant fruit? “The resolution of the gods, the intellect of the wise, the humility of the learned, and the destruction of those who perform evil deeds.“

Vidura lists the five fires that men must tend to and the five who must be worshipped to obtain fame in this world. Of more interest to me was the enumeration of the five who follow wherever you go – “friends, enemies, those who are neutral, those you live on, and those who are supported by you.“

Finally, Vidura tells what is “like wisdom draining out from the bottom of a water pot” – if there is a hole in any of the five senses. Excessive addiction to any of the senses is like that hole in the pot.

What are those six vices that must be avoided if a person desires prosperity? “Sleep, drowsiness, fear, anger, laziness, and procrastination.“

Yes, we have procrastination again! Arjuna took to practicing at night to become the best archer, and to do that he learned to avoid sleep and drowsiness. One Astra fired by Arjuna in his battle with the Kurus at Virata was the sammohana, which caused sleep.

Who are the six that must be avoided? “A preceptor who does not teach, an officiating priest who has not studied, a king who does not protect, a wife who speaks unpleasantly, a cowherd who desires a village and a barber who desires the forest.” The last bit is probably a pun since the job of a barber is to shave and cut hair.

Six qualities that are never to be given up are “truthfulness, generosity, endeavor, lack of jealousy, forgiveness, and fortitude.“

The incident of Ashwatthama the elephant, Indra asking for Karna’s armor and earrings, Duryodhana’s entire life of envy, Drona’s refusal to forgive his childhood friend Drupada come to mind. As the Mahabharata says again and again – “dharma is subtle”!

Remember the “five” who always follow you? Similarly, there are six who live off six. They are – “thieves live on those who are careless, physicians on diseases, wayward women on lechers, priests on those who offer sacrifices, kings on those who quarrel and the learned always live on fools.”

On that note, I will end this piece, and cover the seven, eight, nine, and ten in the fourth piece.

Verses and text are sourced from Bibek Debroy’s unabridged, ten-volume, English translation of the Bhandarkar Oriental Research Institute’s Critical Edition of the Mahabharata, published by Penguin from 2010 to 2015. The verses here are from volume 4.

Explore Tales from the Mahabharata: Vidura Niti  Part I, and II