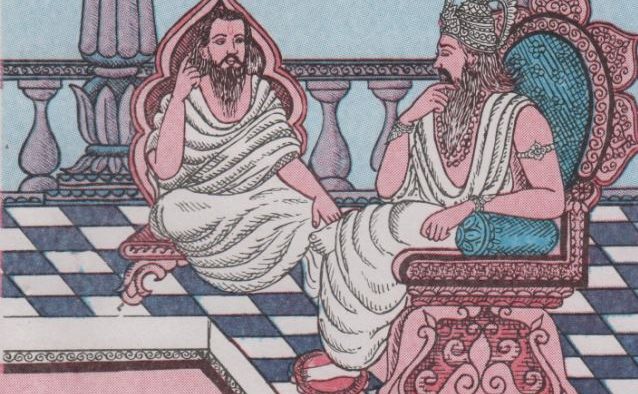 Vidura ended the previous chapter by telling the king that Yudhishthira was fit to rule, that he had suffered much on account of his ‘compassion and non-violence’, and deserved to be king. That was, in essence, his reply to Dhritarashtra’s question as to what would be best for Yudhisthira and for the Kurus.

In this chapter – the third in Vidura Niti – Dhritarashtra asks Vidura to share more words of wisdom since he was not satisfied with his advice, full of ‘dharma and artha.’

The questions before Dhritarashtra were whether he was prepared to get into an internecine war over land and whether he would speak the truth or not on the question of whether the Pandavas had successfully completed their thirteen-year period of exile as agreed upon in the second round dice (Anudyuta Parva).

Vidura addressed these unasked questions by recounting the “ancient history of the conversation between Virochana and Sudhanva, over Keshini”. Vidura had alluded to this in the first chapter, but not elaborated. Here, he recounts the story in detail.

Virochana was Prahlada’s son. Prahlada, as we know, was the son of the asura king Hiranyakashyipu. There was a svayamvara held for Keshini, where both Virochana and Sudhanva, a brahmana, arrived. Keshini posed a question to Virochana – who was superior, Sudhanva the brahmana, or Virochana?

Virochana offered Sudhanva a seat along with him, under the assumption that Sudhanva was at best his equal, nothing more. Sudhanva, however, refused as accepting would mean he would descend to the level of Virochana, which was unacceptable.

Both disagreed as to who deserved a higher seat, and both put up stakes on the answer. Who would decide, and decide honestly? First, Sudhanva put up their lives as stakes, and second, as to who would decide without telling a lie, both agreed to Sudhanva’s suggestion to go Prahlada, Virochana’s father.

Before Prahlada answered their question, he posed a question of his own to Sudhanva – ‘Where does the false witness, who neither speaks the truth nor lies, spend the night?’ Sudhanva answered the question in two parts. First, he replied to Prahlada’s direct question:

Second, he elaborated by describing what a lie was like, depending on who the lie was spoken for:

An interesting point is that the value of a cow, in this answer, is deemed lower than a horse’s. The second point should be obvious to all – the whole dispute between the Pandavas and Kouravas centered around the land – whether Yudhishthira was to be given his kingdom back, now that the exile of thirteen years had ended.

If the period had ended without the Pandavas being discovered in the thirteenth year, then there was no option for the king but to return their kingdom to them, as per the conditions of the bet laid down in the second round of gambling (Anudyuta Parva).

The only way this would not happen was if the king uttered a lie, which is what Vidura warned against – “Therefore, you should not utter a falsehood for the sake of the land. By deviating for the sake of your son, do not head towards destruction with your sons and your advisers.”

On the question of lying, or bearing false witness, Vidura enumerated the seven kinds of people who should not be called as witnesses:

I can only wonder about some on this list, but moving on, Vidura tells Dhritarashtra that “Old age destroys beauty, hope destroys steadfastness, death destroys life, jealousy destroys dharma, anger destroys prosperity, association with the ignoble destroys conduct, lust destroys modesty and vanity destroys everything.”

Choosing the right path was not a matter to be left to the gods, since, in Vidura’s words
“The gods do not protect with a staff, like herdsmen looking after animals. They give wisdom to those they wish to protect.”

Vidura also tells Dhritarashtra nor would prayers save a person who has resorted to lies and deceit, and would desert the liar like birds who have grown wings and who leave their nest.

He then tells Dhritarashtra that while there are eight qualities that are considered great and as good as having attained heaven, the one quality that bound all of them together was a king honoring a man.

He said that while “Sacrifices, generosity with gifts, studying and austerities” were the innate qualities of the virtuous, “self-control, truthfulness, uprightness and non-violence” were the four qualities pursued by the virtuous.

The pursuit of adharma could not bring happiness either – “If one tries to cover up a hole with riches that have been obtained through adharma, it will remain uncovered and another will surface elsewhere.”

Vidura ends this chapter by telling the king that while Duryodhana and Duhshasana, his sons, were stupid, so were Shakuni and Karna. The blind king would be better off treating the Pandavas as his sons.

Excerpts from Bibek Debroy’s unabridged, ten-volume, English translation of the Bhandarkar Oriental Research Institute’s Critical Edition of the Mahabharata, published by Penguin from 2010 to 2015. The verses here are from volume 4. The Sanskrit verses are John Smith’s revision of Prof. Muneo Tokunaga’s version of the text, and available online at https://bombay.indology.info/