The Story Of Sage Shandili: Garuda’s Arrogance and Realization 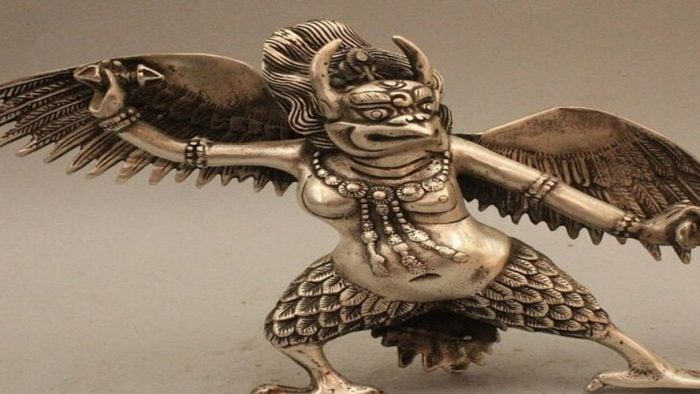 This is a short story in the Udyogaparva where Devarshi Narada narrates to Duryodhana – too late in the day for Duryodhana to make amends though. This small story has deep insight – in particular, for modern times. It comes in passing, just before Sage Galava and Garuda meet Yayati, but leaves a deep imprint and one feels indebted to our ancient sages for such deep thought and perspective.

Sage Galava had promised sage Vishwamitra 800 horses that were pure white but with a tinge of black in their tail. Galava had brought this enormous task upon himself pestering Vishwamitra to seek a gurudakshina when he desired none. In this monumental burden, the great Garuda – also called Suparna – offered to help Galava. The two set out in search of options. On their way, they found the serene hermitage of Sage Shandili on the Mount Rishabha. She offered them shelter for a while. Now, Sage Shandili was no ordinary sage. Years of extreme austerities had physically worn her, but she was full of extraordinary powers that come from deep penance alone. She offered them food that was rendered special through her Yagnas of Baliharana and Vaishvedeva. Galava and Garuda satisfied themselves with her offerings, rested themselves, and fell into a deep sleep.

After a brief muhoorta, the great Garuda woke with the intention of proceeding further in their search. But, to his horror, Garuda found himself very light and without his two heavenly wings that took him far and wide across the worlds, whenever he wished. The wings had simply withered away and fallen off from his body onto the ground. He was left with his immense bodily power, strong legs, and sharp beak but without his mighty wings, he simply seemed like a mass of flesh. Galava, too, was stunned to see the abysmal state Garuda had been reduced to. Garuda himself was in a state of disbelief and deep dismay to say anything. Recovering in a while, the thoughtful Galava wondered. “Oh great Garuda, how at all did you come to such an abyss? What does it mean for you and me? How are we going to proceed further in our mission? Will we ever be able to repay Sage Vishwamitra’s gurudakshina? How and where do we go further from here”. Galava was rather worried about his own self initially. However, the sage in him got ahead of himself and began to counsel. “Oh – great Garuda, you must have done something against dharma for you to meet this end. At the very least, you must have thought of an unrighteous act in your mind. Please do think and tell me, did you commit the mistake of indulging in any thought of ill consequence? It cannot be one of small magnitude, let me tell you, for you to lose your enormous divine wings. It must be of damage to dharma in an immense way. You must have thought of something that must have put you firmly away from the path of dharma.”

Garuda was so far in dismay and disbelief to think clearly on why at all did he meet such a fate. Now, Sage Galava’s words fell on his ears like enlightenment. ‘A thought that could have damaged dharma’ – at once Garuda realized the wrong that he had committed. “Oh Sage Galava, I realize the mistake that I have committed and it is indeed a big one. I indulged in a wrongful thought in relation to this great Tapaswini – that is unfortunately true.” He deeply sighed and began to narrate. “Looking at the enormous hardship she has to go through on this Mount Rishabha, I thought I must release her from here and take her to a place where she truly belongs. That great abode of Vishnu, that high place of Maheshwara, that resting seat of Prajapati Brahma, that Holy site where innumerable yagnas occur – I thought that is the place that she richly deserves and is truly hers. I thought of taking this great tapaswini there, in a single great fly with my mighty wings. In this way, I thought, my mighty wings will be put to for an act of puNya. I only had the intention of placing her in a greater home. Oh Sage Galava, but now I realize how ill-conceived my thought was. I shall at once fall at her feet, confess to my thought of adharma. She alone can release me from my misery, let her pave the way for me as she deems fit”.

So saying Garuda placed himself at her lotus feet. “Oh Devi, looking at your life of great solitude, looking at your hardship and your enormous tapas, I thought of an act that could be of your pleasing. I thought of taking you to a higher place of heavenly nature. This desire of mine rose out of immense devotion and respect for you, but it did not strike to me that this may be against your own wish. Now, I do not know if this is a thought bearing a good in the future or it is ill consequence. Whichever way, I seek your pardon. Please relieve me of my misery through your immense greatness. That befits your great penance.”

Shandili was immensely pleased with Garuda’s realization. She looked at Galava and Garuda both and said “Hey Suparna, there is no need for you to be distressed. You shall regain your great wings very soon. Relieve yourself of your illusory suffering. However – Hey vatsa Suparna, know that you have indeed demeaned me, an act of adharma. Please always remember that I never forgive any demeaning of me. Anybody who demeans me shall immediately suffer the consequences of it. All puNya of even the highest nature shall come to naught and one becomes a full of paapa. You have indeed been concerned about the hardship I face here on this Mount Rishabha in solitude. In these austerities, I may have lost my appearance, but my performance, of all righteous acts, have collected in me this immense power. Oh Garuda, our thoughts and acts of righteousness always bear the right and divine fruits. Oh King of Birds, you are free now and go where you desire to, but know that you should not demean me ever again. Know that you cannot be demeaning any woman. Women are not to be demeaned ever – Oh the mighty Bird. This you must bear in mind forever, as you go from here. Oh Garuda, you shall be now as powerful as ever and the sky shall belong to you again.”

At that very moment Garuda found his wings restored. With the grace of Shandili, his wings now had more power. Seeking her blessings, Garuda then left along with Galava in search of the eluding horses for the gurudakshina.

Firstly, it establishes a wrong at the level of thought. Secondly, it yet again demonstrates the mistakes we do in the arrogance of our power. Garuda is proud of his wings and power that he thinks of others condescendingly. Thirdly, he does not even think whether Sage Shandili seeks be to in those exalted places or not. She has her own wishes, will and destiny. Garuda is not to think for her on her behalf, that amounts to demeaning her personality. This is the most immense insight from this story – keeping one’s consent at the center of one’s life/destiny and making that central to Dharma even at the level of thought. Fourthly, a great tapaswini like Shandili can go where she seeks at her will. That does not need Garuda’s charity. Our acts of good for others must come out of true necessity alone and not from the arrogance of our power, however gentle it is in expression.

The relevance for modern times is unmistakable. In our over-indulgence of doing what we unilaterally think as right for others, in our arrogance of charity, without their active participation in thought and action, we demean them. Liberal intellectuals, academicians, social activists and transformation Champions would do well to reflect upon from this story.