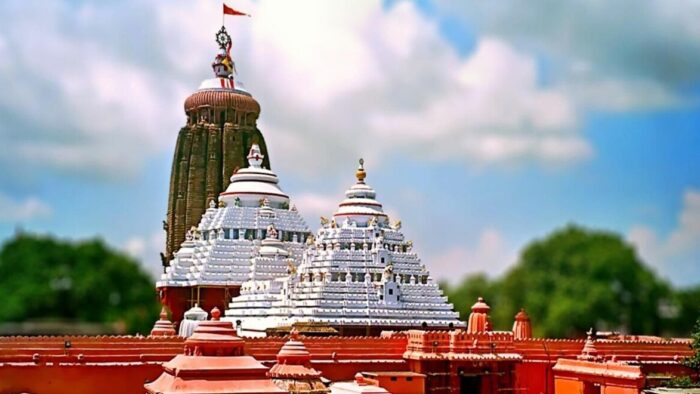 Shri Jagannath is Nirakaar Brahma– fluid and formless without a beginning, middle, and an ending but still absolute and complete. He is a ceaseless expanse of Divine grace capsulated in a wooden frame –The Daru Brahma. He is the sovereign protector and responsible destroyer of his creation. His radiance is infinite as He nourishes the entire world with His balmy warmth and soothing patience restored in His big circular eyes that carry the Sun and the Moon together.

Meaning: I see You without a beginning, a middle and an end; in possession of infinite valor; and also, having innumerable arms; having the sun and the moon as the eyes; having a mouth like the blazing fire; heating up this Universe by the brilliance you possess.

Shri Jagannath,  an incarnation of Shri Vishnu is the potent living Divine, in possession of shashi soorya netram – The sun and moon as His eyes, incessantly directing unreserved grace towards His devotees. He lives in the Universe illuminated by the sun and accumulates the Universe in His vision. At the Shrimandira of Shri Jagannath, Makara Sankranti is elaborately celebrated as the Uttarayana Yatra of the Divine Trinity- Shri Balabhadra , Devi Subhadra, and Shri Jagannath.

Dedicated to the Sun God, Makar Sankrati, marks the first day of the Sun’s transit into the zodiac sign of Makara- Capricorn. On this day the Sun starts moving towards the northern hemisphere indicating the finale of the wintery months. From this day onwards the days are longer and warmer. This transit of the Sun is the period of Uttarayana– Northward. The zodiac sign Makar, is ruled by the planet Shani– Saturn .

On Makar Sankranti the Sun moves into the house of his son, Shani, and stays with him. The day signifies the reconciliation between the father- Surya and his son- Shani who are normally not in amicable terms with each other.

Meaning: Fire, light, day, the bright fortnight of the month, the northern movement comprising six months of Uttarayana; those people who have departed through that path attain Brahman – freedom from the cycle of birth and death.

The Uttarayana Yatra of the Trinity is preceded by the Baula Amavasya rituals that welcomes the mango blooms seen clustering the mango trees. Mango as fruit is vital to the farmers of the region. Every year it takes almost four months for the mango trees to transform the flowers to fruit. The Baula Amavasya ritual is dedicated to ensure a superior and generous mango reap  with the blessings of Shri Jagannath.

At the Srimandira , in the Hindu month of Pausha , the Amavasya– new moon is observed as Bakula Amavasya or Baula Amavasya. The day is dedicated to the mango blooms known as Baula in the vernacular dialect. On this day, mango trees and mango blooms are worshiped. At the Jagannath temple the Trinity is offered mango blooms and a special sweet rice dumpling kheer popularly known as Gaintha.

The Gainthas are soft rice flour roundels, soaked in thick sweetened milk. The mango trees are also given a ritualistic bath, adorned with new clothes, and thereafter offered flowers and Bhogo.

At the Srimandira of Shri Jagannath, the rituals for Makar Sankranti begin a day before Sankranti on masaant, marking the end of the ongoing month. The sevayats perform the Phula Melana Niti ,Chaula Melana Niti and the Nababanka Niti on the day ahead of the Uttarayana.

The day before Sankaranti ,  Mali sebayats stitch flower garlands and ornaments for ritualistic offering to the Trinity and  reach the Beherana Dwara. They hand over the garlands and ornaments to the Palia Sebaks. These galands are offered to the Deities during Sandhya Aarati. This completes the Phula Melana Niti.

Myth has it that Goddess Lakshmi returns to the Srimandira after visiting her parents’ house the Sea god, Mahodadhi. On her return she brings loads of goodies from her father’s house. She brings along sweets, fruits, new clothes, and most importantly new paddy reap of the season for her husband Shri Jagannath and His siblings.

The goodies that she brings along as gifts are displayed by taking it in a procession around the temple nine times. This new reap of rice is offered as Makara Chaula- Rice to the Triad the next day.

For the Chaula Melana ritual, newly reaped rice is bought from the Dhana Ghara by Berabhai Pradhana Sebeka. After that the Chief  Bhoi Sebaka collects the rice and takes it around the temple premises in a procession.

Then the rice is kept inside the Indrani Temple located within the Srimandira premises. This rice is used for the Makara Chaula Prasad offered to the Deities the next day morning on Makar Sankranti.

On the day preceding Makar Sankranti the Triad adorns the Nababanka Bhesha. Nabanka means number nine. The belief is that nine parikramas done around the temple on this day gives the devotee the best-desired results.

The return of Goddess Lakshmi from her Father’s house to the Srimandira arouses the paused love that Shri Jagannath has for His consort who had been away from Him for a month. He dresses up in silken robes with thick red borders to welcome her back. This dress is adorned by the Deities as the last costume of the day during the Badasinghar Besha at night.

The Triad is draped in long red bordered attire that frames the face of Shri Jagannath and His siblings prominently. Specially designed Hala Mushala, Shankha Chakra ,Tadagi and Kundala are used to decorate the Deities. The flower ornaments used during this Besha are made with Tulasi and Marigold Flowers. A conical head-gear using Tulasi and Marigold adorns the Triad.

On the day of Makar Sankranti as the Sun transits into Makar Raashi, Shri Jagannath undertakes the Uttarayana Yatra. Shri Jagannath, Shri Balabadra and Devi Subhadra are dressed in the special Makar Chaurashi Besha. The Besha derives its name from the number Chaurasi meaning 84. As per Hindu faith, it is said that a human takes birth after 84 lakh yonis, covering all names of the species that live on this earth of which man is the last.

This Besha is indicative of the 84 lakh yonis births. The Trinity wears Makara-chula, a head-gear made of tulasi and marigold flowers. The Bada Odia Matha provides garlands made of different flowers and basil leaves, makar chula is given by Jagannath Ballav Math and the Taada is provided by the Alam Chandi Mandir.

The special food offering made to the Trinity is the Makar Chaula. Chaual meaning rice is the main ingredient of the dish. Makar Chaula is a special raw rice pudding prepared with freshly harvested rice grains, procured and soaked the previous day in the Chaula Melana ritual.  Rice grains are soaked overnight in water.

The soft -brittle rice grains are drained and then mixed with a generous amount of  jaggery, grated coconut, banana, chenna- cheese, yogurt, fruits, pepper powder, crushed nutmeg. Makara chaula is taken around the Srimandira in a procession, which is called Makara Bedha.

The Jagannath culture rejoices in recognizing each and every aspect of everyday activities related to subsistence. Celebrating the new paddy reap, mango blooms, the marigold, basil leaves and the changing phase of the Sun are vibrant examples of patronizing the essence of local agriculture and nature. Jagannath Sanskruti has evolved with time, adding new rituals and dimensions of worship, harmonizing the way of life and belief system that nourishes its existence.

The culture has over the centuries infused tradition, history, and mythology amiably and progressed providing a diverse yet composite silhouette to the Sanskruti of Shri Jagannath.

Note: This year the Uttarayana Yatra rituals of the Triad at Shri Jagannath temple Puri begins with Baula Lagi Amavasya on 12th Jan , 2021. Nabanka is on 13th Jan, 2021 followed by Makara Uttarayana Yatra on 14th Jan, 2021. All the rituals will be conducted with the participation of devotees, with strict precautionary measures for the prevailing Covid-19 pandemic situation.