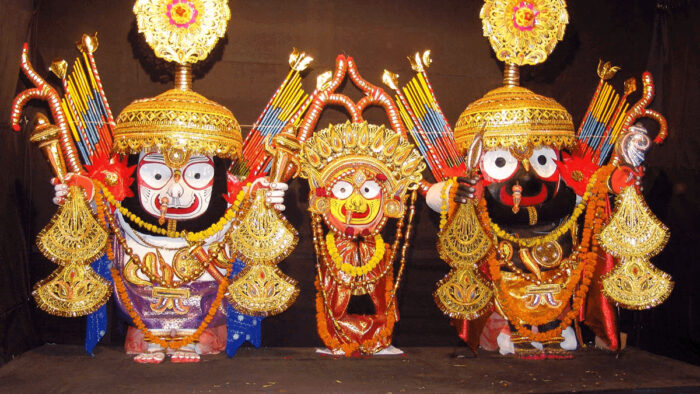 Shri Jagannath is an antiquity existing in the contemporary era as an anthropomorphic Divine. An important aspect of the anthropomorphic ritual includes the various Beshas/ Vesha – the special attire adorned by the Holy Trinity throughout the year.

The special dressing of the Divine Trinity includes daily costumes and a series of 32 special Beshas on various occasions. One infrequent Besha is the Nagarjuna Besha. This year Shri Jagannath and Shri Balabhadra will adorn the Nagarjuna Besha after a gap of 26 years, last worn by the Divine Siblings in the year 1994.

The first Nagarjuna Besha of the century will be witnessed this year on November 27th, 2020. On the day Shri Balabhadra and Shri Jagannath will be dressed as Naga combatants in warrior attire. The long gap of twenty-six years is because of the unique calendar days followed for conducting the Besha.

The Nagarjuna  Besha is done in those years in which the month of Kartika has six days of Panchaka (five days) instead of the regular five days. The Panchaka marks the end of the Kartika month and concludes on the day of Kartika Purnima.

The Holy Trinity gets attired in the Naga fighter costume that coincides with the rare planetary positions making the Nagarjuna Besha or the Bira Besha an extraordinary spectacle.

There are various opinions related to the Nagarjuna Besha. There is an opinion that the warrior costume of Shri Jagannath and Shri Balabhadra commemorates the killing of the powerful king Sahashrarjuna also known as Kartyavera Arjuna by Shri Parasurama, the sixth incarnation of Lord Bishnu. Owing to this opinion the Besha is also called the  Parasurama Besha.

As per the legend, there was a fierce battle between Arjuna and his heroic son Nagarjuna. Due to the undisclosed identity between the father and son, Nagarjuna gets into combat with his father Arjuna while guarding a Gainda– rhinoceros in the garden of Shiva.

Searching for the rhinoceros Arjuna reaches the garden of Shiva and wants to take the Gainda for the purpose of tarpana. Nagarjuna protests and resists giving the Gainda to Arjuna.   This results in a fight between the two.

Arjuna was overconfident that he was the best and couldn’t be killed by anyone other than Krishna. In the combat, Nagarjuna kills Arjuna.  Post Arjuna’s death Nagarjuna is told by his mother that he had unknowingly killed his father.

Hearing about the sin of Pitru hatya– Father’s murder, Nagarjuna is very sad and calls upon the Devatas for help. The Devatas in turn seek help from Surya Deva– Sun God, who had the power to bring back the dead to life.

But Surya Deva could only bring the dead back to life on a day similar to the sixth day of Kartika. Shri Krishna created the day and Surya Deva brought Arjuna back to life.

Meaning: My Lord, You are the controller of formidable strength in three kinds of energy. You appear as the reservoir of all sense pleasure and the protector of the surrendered souls. You possess unlimited energy, but You are unapproachable by those who are unable to control their senses. I offer my respectful obeisances unto You again and again.

Nagarjuna was a medium to break Arjuna’s ego of being the best warrior. It is believed that Krishna had transformed himself as Nagarjuna, Thus on this day, Shri Jagannath is dressed up in the Nagarjuna costume.

The Naga culture is specific to Puri Dham. The Naga attired artists can be seen in performances on the streets of Puri during the Sahi Jata on the occasion of Ram Navami.

The valiant costume of the Lord is colourful and majestic. Festooned with sixteen types of weaponry and dressed in deer and tiger skin, decorated with feathers, the costume has the simplicity of the Naga Sadhus and the valour of warriors at warfare. During this Besha Sri Jagannath and Balabhadra sport long beard and moustache, similar to the Naga Sanyasis. 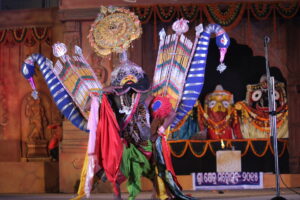 Lord Jagannath has a Naga-Tati around his waist.  The Naga-Denu extending at the back of the idols adds to their chivalry grandeur. The Divine brothers have a bow and a quiver packed with powerful arrows.

They hold a dagger, a knife, a sword, pike, club and as many as sixteen weapons. At the back armour is placed for protection.

Shri Balabhadra holds the Hala – Plough and Musala – mace while Jagannath holds the Shankha- conch and Chakra-wheel, their trademark weapons.

The idols of Lord Jagannath and Lord Balabhadra are adorned with Srihasta-hands and Sri Payara-foot made of gold. Shri Balabhadra and Shri Jagannath are crowned in a helmet-like headgear known as Handia. On the Handia remains the Jatta, on the Jatta is the Chula and then the Naga Phula completes the head ensemble.

The sevayats in charge of dressing up and decorating the Trinity for this special ritual include the Bhitarchhu Mahapatra, Talichhu Mahapatra, Khuntia Mekap and Pushpalak servitors. The headgear and the weaponry are made at Chakrakot Jaga at Harachandi Sahi in Puri by dedicated craftsmen who start work on Bijaya Dashami tithi on Dussehra.

The accessories and weaponry of the Lords are made using bamboo, solho, silken and zari clothes, and wood apple gum. This is the only Besha of the Lord where the Gods dress up with perishable natural accessories, as well as gold ornaments. 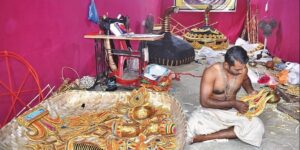 This year the Nagarjuna costume and ornaments of the Deities would be brought to the temple from Harchandi Sahi amid tight security by the servitors by 2 am. The Besha Lagi process will begin by 4 am and conclude by 7 am.

The Lord gives audience to his devotees accompanied to the throbbing beats of the Naga Badya– a battle rousing instrument. The Naga Baadya is specifically played only during the Nagarjuna Besha.

A glimpse of the Shri Jagannath in His Nagarjuna Besha causes the destruction of both mental and physical enemies. It fights all the ailments of the body. The belief is that Jagannath as Nagarjuna secures freedom from, disease, adversity, discontent and premature death.

It multiplies the Divine blessings, causing the destruction of self-ego and at the same time keeping the humankind humble and obliged at the feet of the colossal God – Shri Jagannath.

Note: This year due to the prevailing Covid-19 pandemic situation, the Nagarjuna Besha on 27th Nov 2020 and the Kartika Masa rituals at the Moola Peetha of Shri Jagannath at  Puri Dham are being done without the participation of devotees.