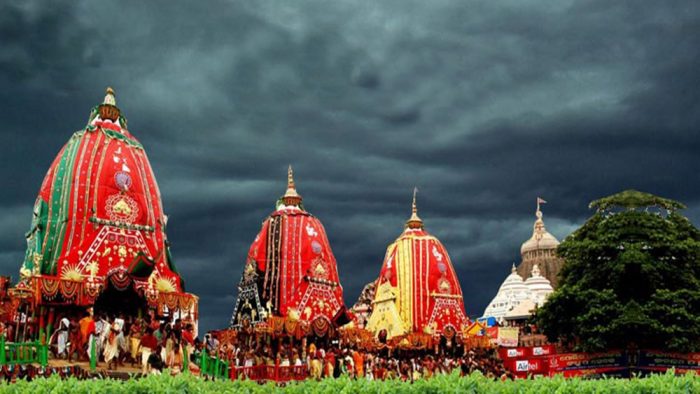 The voyage of the Deities to the world beyond the Shrimandira is an elaborate ceremony. After all, it is the journey of Shri Jagannath to His Birthplace – The Shri Gundicha Temple. The Nabajouban Vesha of the Triad confirms the recovery of the Gods from the recent illness that they had been suffering from after the grand bathing ritual during the Snana Utsav. The Gods give an audience to the devotees validating their fitness and then the preparation to undertake the journey to Shri Gundicha is confirmed. The next day they are ready to take a chariot ride to the Gundicha temple in the famous Ratha Yatra. The Ratha Yatra commences from the second day of the bright fortnight in the month of Ashada (June-July).

Every year three new chariots are built to take the Gods on their annual journey.

Balabhadra’s Chariot: Taladhwaja is 13.2 m. high with 14 wheels. The canopy fabric is red and green in color with a palm fruit placed on top. The Ratha is guarded by Basudev. The Sarathi of the Chariot is Matali. The horses pulling the Ratha are Tribra, Ghora, Dirghasharma, Swornanava. The flag on top is called Unnani. The rope used for pulling the Ratha is called Basuki Naga.

Devi Subhadra’s Chariot: Darpadalana also known as Padmadwaja is 12.9m.high with 12 wheels. The canopy of her chariot is red and black. The Ratha is guarded by Jayadurga. The Sarathi of the Chariot is Arjuna. The horses pulling the Ratha are Rochika, Mochika, Jita, and Aparajita. The flag on top is called Nadambika. The rope used for pulling the Ratha is called Swarnachuda Naguni.

Sri Jagannath’s Chariot: Nandighosa is 13.5m high with 16 wheels. The canopy of the chariot is red and yellow in color with a wheel placed on the top. The Ratha is guarded by Garuda. The Sarathi of the Chariot Daruka. The horses pulling the Ratha are Shankha, Balahaka, Suweta, Haridashwa. The flag on top is called Trailokya Mohini. The rope used for pulling the Ratha is called Sankhachuda Naguni. 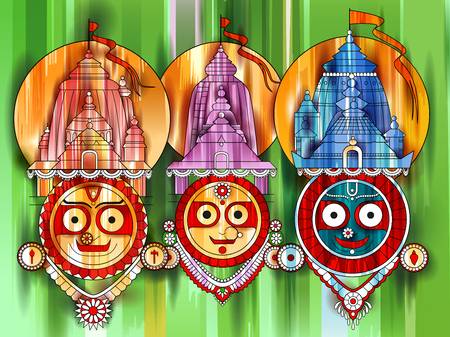 The Rituals prior to the Journey

The regular morning rituals –Mangala Ararati, Mailiam, Avakasa is completed. On the night before the Deities have been specially dressed with the Senapata.

As per rituals, the Ratha Pratishta and Ratha Abhisekh are done with Ganpati puja, Vasodhara puja, Matru puja then the Tripura Kalasha, and the Dwaja puja is completed. Then the Rathas are ready to be occupied by the deities.

After the Rosa Homa and the food offering to the Deities is completed, the Daitapatis release the Deities and start the famous Pahandi –The progression of taking the idols out of the temple, one after the other.

The sequence in which the Gods are brought out of the Srimandira for the Ratha Yatra has Shri Sudarshana coming out first followed by Shri Balaram; then comes Devi Subhadra and finally Shri Jagannath.

On the seventh stair as per tradition, the three Deities are decorated with the inverted heart-shaped headgear called the Tahiya that is presented by Raghava Das Math every year on the occasion of Gundicha Yatra.

After putting on the Tahiya the Gods are brought through the Anand Bajaar to the Singha Dwara and then mounted on their respective chariots. Sudarsana shares the chariot with Subhadra.

Post the mounting of the Deities on their respective cars, the Changada Mekap places Chaka-Apsara, the circular cushions that give support to backs of the three Deities.

Madanamohana and Ramakrishna are brought from the temple and placed in Nandighosa and Taladhwaja respectively.

Two big boxes containing the daily essentials and ceremonial robes, dresses, and ornaments of the Deities to be used in the coming days at the Gundicha temple is placed behind Shri Jagannath in his chariot. Other dresses and ornaments are separately placed along with essential puja items, plates, pitchers, and other accessories in the other two chariots.

Chitta Lagi – Chitta the drop-shaped golden ornament adorning the forehead of the Gods is placed on the head. The Chitas for the Ratha Yatra festival is specially made of sola, golden zari, and studded with various gemstones. Now the three Deities appear gorgeously adorned with floral circlet and decked with floral wreaths, ready to move.

Chhera Pahanra – The Gajapati Maharaja of Puri is considered as the foremost servitor of the Holy Trinity. He performs the menial job of a sweeper offering utmost modesty to the Lord of the Universe-Jagannath. The king arrives at the venue in a decorated palanquin. He offers garlands, performs arati, pays his respect with folded hands, fans the Triad with the golden fly whisk, and then sweeps the chariot platform around each Deity. The Gajapati with the golden broom in his hand sweeps the flowers thrown on the outside space of the chariot. Thereafter fragrant sandal water is sprinkled to sanctify the chariots.

After the Chhera Pahanra ceremony, the Rathas are ready to move. Bhois fasten the Sarathis in the three chariots.

Then the wooden flights of stairs laid in front of the chariots are unfastened and the wooden horses are yoked.

A thick rope of eight-inch thickness and 250 ft length is tied to each chariot for pulling the Rathas. The ropes are fastened to the cars and they are pulled by a sea of devotees.

The Taladhwaja Ratha, the chariot of Balabhadra moves first.

Then follows Darpadalana, the chariot of Subhadra .

Lastly, Nandighosa, the chariot of Jagannath starts its roll. 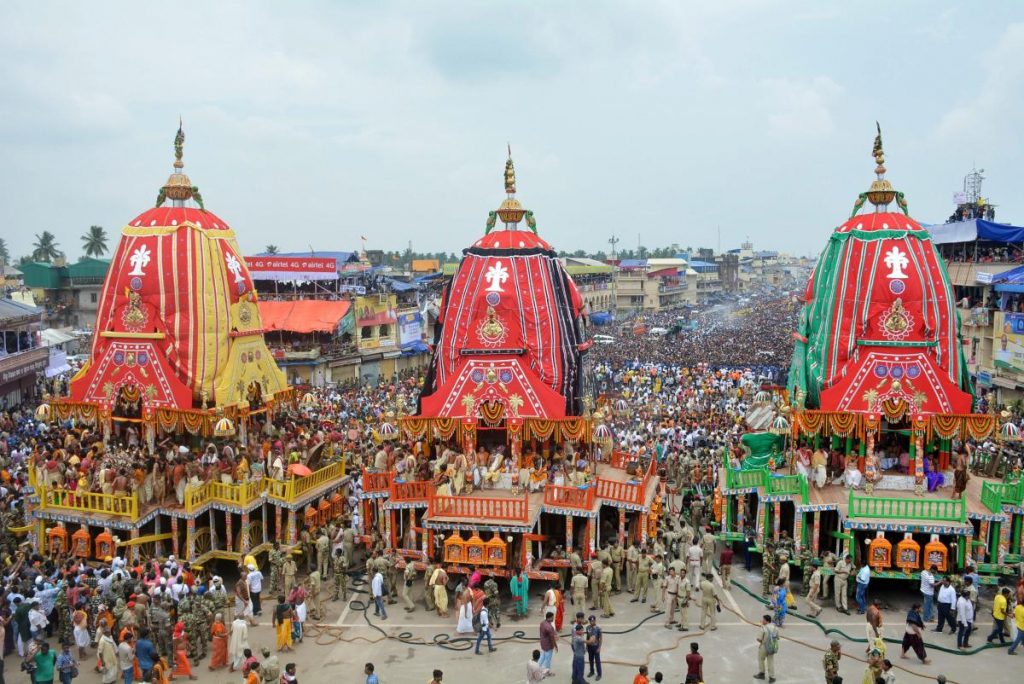 On the way to Shri Gundicha temple, one hundred and forty-six offerings are made to the Deities on the behalf of various Maths.

The above lines mean – The Atma is Rathi – it is the owner of the `chariot’ – The chariot symbolizes the body. The intellect is the Sarathi – the driver, represented by the mind. The senses are the horses, and The Panch Vishayas – the material substance of the five senses –is the pasture for the horses.

Jagannath Ratha Yatra is the realization of the self. It summarizes the whole universe in the eyes of God as one. The true spirit of the Ghosha Yatra lies in the complete submission of man to God. This surrender will curtail all attractions that keep them attached to their material existence and assist them in the path of attaining salvation.

Note: The Jagannath Ratha Yatra 2020 has been allowed to be conducted by the Honourable Supreme Court of India, in the Moola Peetha, Puri on 23rd June 2020. The same has been allowed under strict regulations and without public participation, keeping in view the health hazards under the COVID- 19 pandemic scenario.