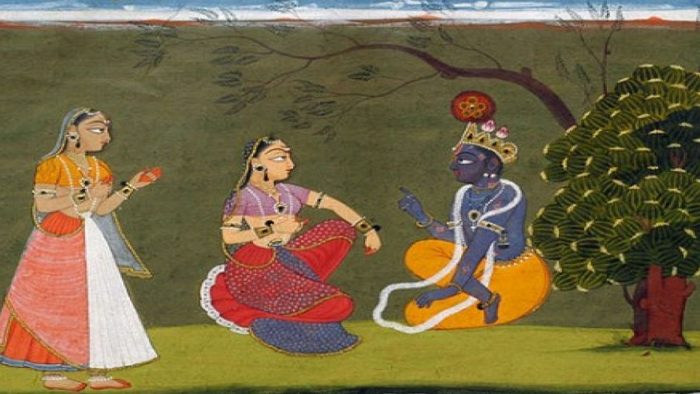 Shri Jayadeva wrote the Gitagovinda in the 12th century at Odisha. It was a dedication of poet Jayadeva to Shri Jagannath, but such was the charm of his writing that the love lore of Shri Krishna and his consort Radha coloured the entire canvas of the Bhakti movement in Hinduism. Written in Sanskrit, Jayadeva’s Gitagovinda eternalized the love tales of Sri Krishna and Devi Radha for all time to come. This illustrious poet of Odisha has ever since remained synonymous with the Jagannath Sampradaya as well as the Bhakti movement for his amorous masterpiece – the Gitgovinda, celebrating the love of Lord Jagannath as Krishna with the cowherd maiden Radha.

“Victory to Jagadisha, the Lord of Universe, He Keshava who assumed ten different incarnations, with a humble request to hear this pleasant, holy and divine poem composed by Shri Jayadeva.”

The Gitagovinda has magnitudes of interpretations. It vibrantly describes the passionate love tales of Krishna who represents the spirit soul and Radha, the corporal being. The eternal love of Krishna and Radha is woven wonderfully by the dreamy wordplay conversation of Jayadeva’s lyrical sensuality. Jayadeve has intensely crafted in his words as the path of the mortal to achieve the Divine. The love of Krishna and Radha extends beyond carnal passion; it is but freedom from the bindings of human limitations yet keeping the human emotions intact. It equates man and woman at par and also connects the Divine and human as inseparable.

It is often said that Shri Jagannath himself helped Jayadeva to complete a critical canto of the composition. Legend has it that once while composing the Gitagovinda, Jayadeva was stuck and was not sure of the words to be filled in the lyrical conversation of Radha and Krishna. After struggling for some time, he left the pen on the palm leaf scripture and decided to go to the river Prachi for a bath.  While away for bath, Lord Jagannath visited his house disguised as Jayadeva. The Lord wrote the incomplete verse of the 10th Canto –

The above lines translate to –
“Sri Krishna was approaching Radha to be gracious to remove the poison of separation by placing her feet liberally like a lotus on his head.”

After filling the verse with suitable words, Lord Jagannath took a meal served by his wife Padmavati, in the guise of Jayadeva. Another legend holds that it was Lord  Jagannatha’s arrangement that Padmavati be married to Jayadeva.

The Gitagovinda is an integral part of the Jagannath temple rituals performed on a daily basis.  As per legend a gardeners’ daughter would sing the Gitagovinda with utmost dedication while plucking flowers and Tulasi for the daily offering. While she sang the love lore of Shri Krishna and Radha, Shri Jagannath would listen to her and only return to the temple after she had left the garden. One day the Gajapati Maharaj visited the temple and upon his audience with the Lord, to his surprise he saw that Shri Jagannath was in torn clothes and his body was smeared with thorns and dust. The King asked the attendants and priests the reason for such unkempt conditions of the Lord but no one had a valid reply. Gajapati Maharaj was upset and returned back to his palace filled with agony. That night Lord Jagannath appeared in the Gajapati’s dream. He told the Gajapati that he was so absorbed in listening to the gardener’s daughter singing the Gitagovinda that he unknowingly had gathered dust, torn his clothes and had thorns inflicted upon his body. The temple Sevaks were not to be blamed. After gathering this information, Gajapati decided that the gardener’s daughter should be invited to the temple and sing to the Lord every day. Since then the Gitagovinda is recited in the temple as Seva on a daily basis.

The Government of Orissa passed the ‘Sri Jagannath Temple Act’ in 1956 and the ritual services of the Srimandira were brought into legal jurisdiction. In the provisions of the Act, the Gitagovinda Seva has a mention. The Sevaks engaged in the Gitagovinda service include Samprada Niyoga, the Sadhibandha Sevaka and the Devadasis. The Devadasis or Maharis as known in Jagannath Sanskruti were entitled to sing the Gitagovinda and dance on it, but after the abolition of the Devadasi system by the Government, this task was performed by the Sadhibandha Sevaka and the Samprada Niyoga.

As a daily ritual, the Sadhi bandha Sevaka recites the Gitagovinda closer to the inner shrine. The morning chores of the God begins with the Gitagovinda recital during the ‘Alasa, ritual at the time of Sakala Dhupa (morning puja). It is also sung during the Bhogo (naivedyam) offerings made to the God throughout the day.  The daily retiring ritual of Shri Jagannath, known as the Badasinghara Vesa also has the Geetagovinda recital. The Lord of the Universe is dressed in silk robes with cantos of the Gitagovinda woven on it. Before going to bed a Gitagovinda recitation at the Kalahata door helps the God to slip into his siesta.

An inscription installed on the walls of the Jagannath temple by King Prataparudra Deva (1497-1540 A.D.) describes the importance of Jayadev’s  Gitagovinda Seva in the temple. The inscription dates back to 6th July, 1500 A.D. and is written in Odia.
The translation of the inscription suggests the following-

With time the Gitagovinda Seva at the Srimandira of Lord Jagannath has undergone many changes. The abolition of the Mahari tradition had immense impact on the Gitagovinda Seva. The Gitagovinda is certainly inseparable from Jagannath worship and Odisha. Today the Gitagovinda has prominence in Odissi dance and music concerts, the sculpture, literature and art of Odisha. This lyrical extravaganza has travelled from the Jagannath temple, across India and beyond making it an affluent acceptance of love, devotion and dedication beyond Utkala.