‘Snana’ in Sanskrit means ‘Bathing’ and ‘Purnima’ translates to ‘Full moon’. Every day throughout the year , the Daru of the three Gods is given a ‘Bimba Snana’ in the sanctum sanctorum. ‘Bimba’ is derived from the Sanskrit word ‘Pratibimba’ meaning reflection. So the daily bathing ritual is done to the reflection of the God captured on mirrors, but on Snana Purnima the breathing Divine, the Living God Shri Jagannath and His Siblings are giving an actual bath with water, much similar to the manner in which humans take bath.

As per legend the Deva Snana Purnima marks the birth of Lord Jagannath. The Skanda Purana mentions that King Indradyumna arranged the bathing ceremony for the first time when the idols of the Deities were installed for the first time in the Srimandira.

The legend goes that when the temple of the Lord of the Universe was to be inaugurated Brahma was invited from Heaven. Brahma, Bidyapati, Biswa Basu , Indradyumna and Devi Gudicha stood by the temple door. Brahma and Bidyapati represented the Brahmanas; Biswabasu represented the Shabaras ; Indradyumna stood as a royal king and Gundicha stood representative to the Female fraternity . Brahma called for permission to open the door in order to meet Shri Jagannath. Shri Jagannath allowed Brahma an entry and asked him his wish.

Brahma asked, “Oh Lord of the Universe, when can I visit you to get your audience?”

Shri Jagannath replied “You can visit me twelve times in a year. Visit me once in a month.”

Upon hearing such a long list Brahma informed him about his incapability to visit twelve times in a year as he had other engagements to attend. He requested Shri Jagannath to shorten the list of visits to three times in a year.  Shri Jagannath agreed to Brahma’s request and said that he could visit on three most auspicious days- Dolo Purnima, Snana Purnima and Shri Gundicha or the Ratha Yatra. Visit me on the following three days he said and witness me in the below mentioned Avataras–

The above lines spoken by Shri Jagannath suggest – On Dolo Purnima He will give darshan as Dolo Govinda ; on  Snana Purnima He would give darshan as Madhusudana and on Shri Gundicha He will appear in Bamana Vesha. He who sees Him in the above three forms will attain Moksha and will be free from the cycle of life and death.

Brahma again requested Shri Jagannath if he could visit twice a year and pleaded that Shri Jagannath allots him two most important days. Shri Jagannath agreed and assigned Brahma to visit him on Snana Purnima and Shri Gundicha. Shri Jagannath said, “On these two days I will be my living and breathing self and give audience to all my devotees.” Brahma was satisfied and started moving away. But again he had doubts and asked, “Oh! Lord , If for some reason I am unable to come on these two days and can only come on one of these days then which day should I opt for?” Shri Jagannath replied “Come on the day of Shri Gundicha , Ghosho Yatra, that is the most auspicious of all days.” 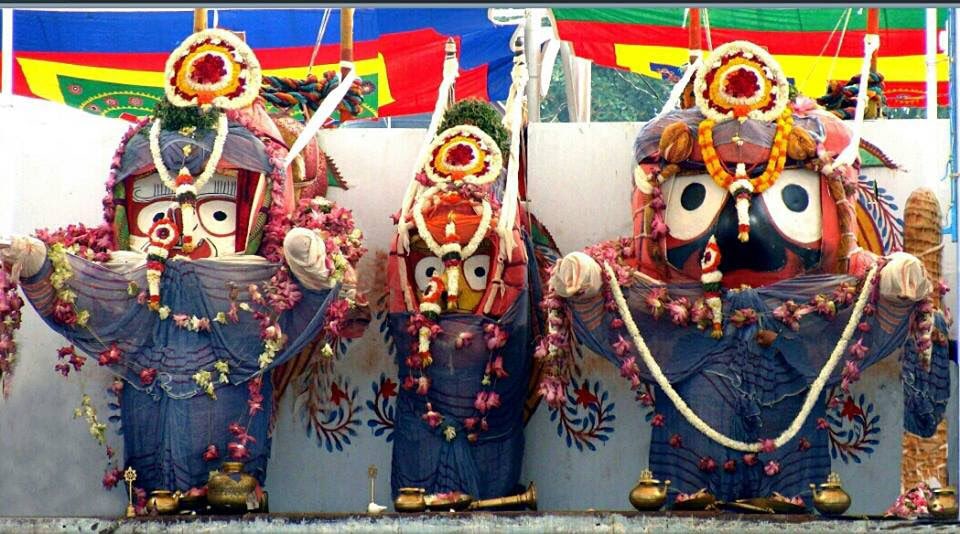 The Trinity on the Snana Mandapa

Snana Purnima is one of the three most propitious days as mentioned by Lord Jagannath himself. The bathing festival of Shri Jagannath takes place on the full moon day of Jyestha , when the Divine Trio bathes in public presence. It is also the first annual ritual of the year when the idols of Shri Sudarshana ,Shri Balabhadra , Devi Subhadra, and Shri Jagannath are brought out of the pious sanctum sanctorum from the ‘Ratna Singhasana’ and placed the ‘Snana Mandap’– The bathing podium for public viewing .

The Gods are brought out in the following sequence.

The above lines mention the sequence in which the Gods are brought out of the Garvagriha for the Bathing ceremony. Shri Sudarshana comes out first followed by Shri Balaram; then comes Devi Subhadra and finally Shri Jagannath reaches the bathing podium.

Shri Sudarshan and Devi Subhadra are both the representatives of Shunya or Shakti and their Phandi Procession is done by lifting the idols and placing them down on bathing dais. Shri Sudarshana is mounted on the backs of twelve Daita Sevayats and then brought to the Snana mandapa. Devi Subhadra too is lifted and brought. The idol of Shri  Balaram  and Shri Jagannath is brought from the Ratna Singhasana  to Snana Mandapa slowly, in a swaying rhythmic walking style.

A day before the Jyestha Purnima bathing, on Chaturdashi the Deities are taken out of the sanctum in a ritualistic procession called ‘Pahandi Vijaya’. The bathing water of the Gods is drawn from the ‘Suna Kua’- The Golden well situated near the Uttara Dwara (North gate). The water from this well is annually used only once on the occasion of Snana Purnima . The water is infused with turmeric, whole rice grains, sandal paste, Ushira, flowers and other herbs. Then the ritualistic water is taken in a procession to the Snana Mandapa , positioned in the north-east corner of the Bahara Bedha (outer enclosure) of the Srimandira .  The Jala Abhisekha of the Gods is accompanied to mantra recitation from the ‘Pavamana Sukta’ as mentioned in the Rig Veda, along with the beating of metal gongs and to the sound of shrill conches. 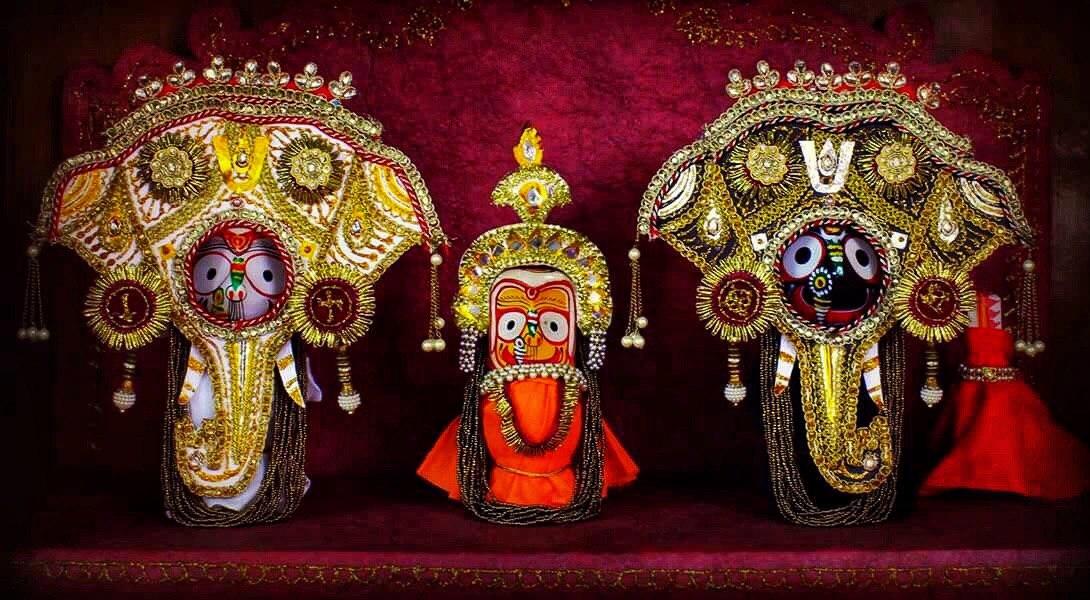 The Trinity dressed in Hathi Vesha

Shri Jagannath is given bath with thirty eight pitchers of water; Shri Balaram is bathed with thirty pitchers, Devi Subhadra with twenty two and Sudarshana with eighteen pitchers. A total of one hundred and eight pitchers of water are put on the Gods. In the presence of Gajapati Maharaj – the Pujapanda, Singhari and Garabadu servitors rinse the Trinity with one hundred and eight urns of water. The entire bathing ceremony is witnessed by lakhs of devotees. After the completion of the ceremonial bath the Gods are dressed as Ganapati in the Gajanana Vesha or the Hathi Vesha. The idols of Shri Balabhadra and Shri Jagannath are decorated with the elephant head tiara having an extended trunk and big triangular ears. Devi Sudhadra is dressed in the lotus outfit. The Hathi Vesha is one of the most beautiful costumes of the Gods. It is said that a glimpse of the Gods in the Gajanana Vesha brings good fate to His devotees.

The following lines speak about the Gajannana Vesha of Shri Jagannath-

The above lines convey that Daru Brahma, Shri Jagannath dresses up as Shri Ganapati, the remover of all obstacles. Shri Jagannath adorns the Gajanana costume and gives audience to His devotees. By witnessing Him in the Elephant costume His devotees are free from problems and hurdles.

After giving Sahanamela – the darshan to the devotees in Gajanana Vesha , the Gods are offered Naivedyam . Post such an elaborate bathing session all the Deities fall sick. They then proceed, one after another in Anasara Pahandi , into the Anasar Ghara – The sick room. Thus begins the quarantine period of Shri Jagannath and his siblings for a period of fifteen days.

This year has been a quarantine year for the entire world. The COVID-19 virus has been instrumental in putting the entire humankind behind doors and also calling for social distancing. This year the ritualistic Snana Purnima at Puri is guided by a new set of regulations keeping in view the well-being of the sevayats and the devotees. A total of one hundred and fifty selected and Covid-19 tested Daita servitors have been assigned the task of the ceremonial bathing festival. Sixty Daitas will bring Lord Jagannath in Pahandi from Ratna Singhasana to Snana Bedi; fifty servitors will be engaged in the procession of Lord Balabhadra;  thirty  for Devi Subhadra and ten  Daitas will be entitled for conducting the in Pahandi of Lord Sudarshan. The circumstances are grim but the God has His way. His rituals continue and so will His grace keep His devotees and servitors’ safe in such difficult times.