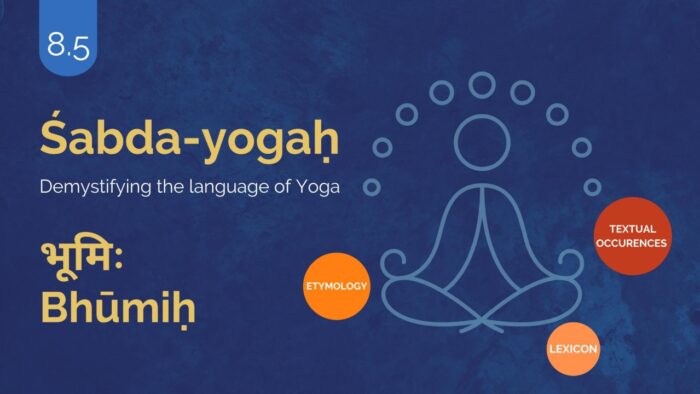 Three texts – Yogasūtra, Haṭha-yoga-pradīpikā and Bhagavad-gītā are consulted for textual occurrences portion. Śabda-yoga is intended to help students, teachers, and professionals of Yoga to develop a sound grammatical, contextual, and thereby an authentic and immersive understanding of Yoga terminologies. 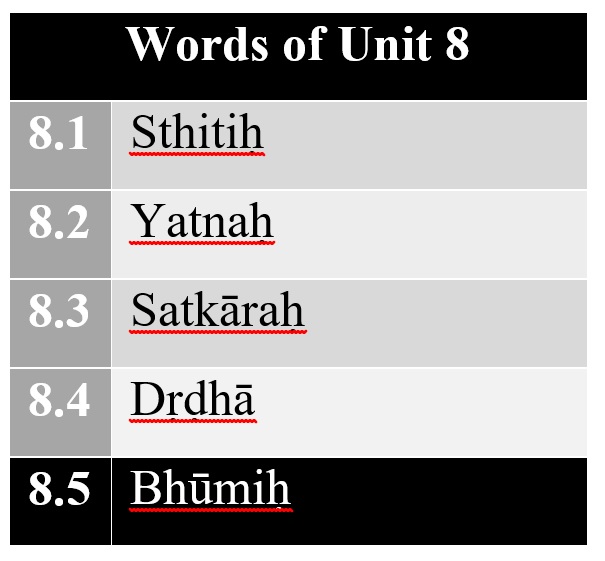 From among the five words for this unit 8, this part discusses the fifth and final word Bhūmi.

The derivation of the term given in Śabdakalpadruma dictionary[1] is as follows – भवन्तिअस्यांभूतनिइतिभूमिःbhavantiasminbhūtaniitibhūmiḥ – Bhūmi is that on which beings exist.

There is one entry for this term in Amarakośa. It is as follows –

There are four occurrences of the term in Yogasūtra. Their brief explanations are as follows –

This reference indicates the attainment of firm ground (bhūmi) in practice by doing the practice of Yoga for long term, in an uninterrupted manner and respecting the practice.

Alabdhabhūmikatva is listed as one among the nine hindrances in the path of Yoga. This is described as inability to scale or progress to higher states (bhūmi) of Yoga.

It could be noted that the term prāntabhūmi is found in this verse. Seven high states of clarity that emerges by reaching Vivekakhyāti. It is described as prāntabhūmi. From among all the commentators 19th century Yogasūtra commentator Sadaśiva Brahmendra gives a lucid explanation to the term prāntabhūmi, where he states  –  प्रकर्षेणान्तोनिवृत्तिःफलत्वेनयासांताभूमयोऽवस्था – prakarṣeṇāntonivṛttiḥphalatvenayāsāṃtābhūmayo’vasthā – the great level of culmination (of suffering/worldly existence) which is the result on attainment state of Vivekakhyāti is stated as Prāntabhūmi.

The fourth occurrence of the term is in the context of channelizing the Dhāraṇā, Dhyāna and Samādhi collectively termed as Saṃyama in various states- Bhūmis.

Sage Vyāsa clarifies that – संयमस्यजितभूमेर्याऽनन्तराभूमिस्तत्रविनियोगः – saṃyamasyajitabhūmeryā’nantarābhūmistatraviniyogaḥ – by the practice of Saṃyama one scales various higher states of mind. On conquering the previous state – Saṃyama is channelized in the higher states.

There is just one occurrence of the term in the Bhagavadgītā, It is as follows –

The nature of Prakṛti is clarified in this verse. Here the five elements, Manas, Buddhi and ahaṅkāra are stated as the eight constituents of Prakṛti.

In the same way, the Ācārya adds that – Manas should be understood as Ahaṅkāra, Buddhi should be taken as Mahat-tattva and Ahaṅkāra as the avyakta (unmanifest) with Avidyā. Thus this in essence indicates the eight subtle causal aspects of creation as seen in Sāṅkhya cosmological framework.  (नःइतिमनसःकारणमहङ्कारोगृह्यते ।बुद्धिःइतिअहङ्कारकारणंमहत्तत्त्वम् ।अहङ्कारःइतिअविद्यासंयुक्तमव्यक्तम् – naḥitimanasaḥkāraṇamahaṅkārogṛhyate .buddhiḥitiahaṅkārakāraṇaṃmahattattvam .ahaṅkāraḥitiavidyāsaṃyuktamavyaktam)

In this text also there is just occurrence of the term Bhūmi. It is as follows –

This verse with reference to Bhūmi discusses the outcome of sītkārīprāṇāyāma.

It has been stated here that by sītkārī – the body attains strength; all troubles will be overcome in the earthly realm (bhūmimaṇḍala) for the practitioner.

It could be observed that while Haṭhayogapradīpikā simply uses the term Bhūmi to indicate the physical earth, in the Yogasūtra it refers to states of mind and also firm ground. It is to be noted that in Yogasūtra commentaries various states of Yoga have been described such as madhumatībhūmi, madhupratīkā etc. More details can be gained by consulting the saṃskṛtayogasūtra commentaries.

Further, two contrasting terms -dṛḍhabhūmiḥ and alabdhabhūmikatvā could be noted. A person who has not made his commitment to practice long term, without break and with respect will be an alabdhabhūmika and on the other hand the one who does so, becomes a dṛḍhabhūmi. This contrast comes through only by exercise of Śabdayoga when the occurrences of the term Bhūmi are juxtaposed.

Also, in the context of Bhagavadgītā it could be noted that though the apparent expression Bhūmi points to one among the five elements – contextual interpretation – derived from the commentary points to the causal, subtle state of the element earth. Hence consulting the commentary, which is an integral part of Śabdayoga, becomes valuable.