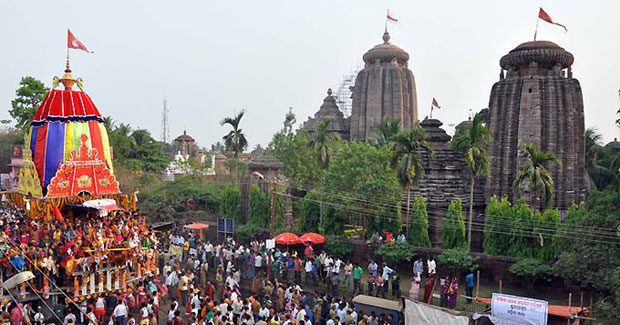 The month of Chaitra, also known as the Madhumasa is closely associated with Shri Hari. This month also marks the Ratha Yatra of Lord Lingaraja, popularly known as the Rukuna Ratha Yatra. At Ekamra Kshetra, Bhubaneswar in Shri Lingaraj’s Swarna Parbata temple, both Shri Hari – Shri Vishnu and Shri Hara – Lord Shiva are revered and celebrated. The word Asoka is derived from the root word Soka – that means sorrow. Therefore Asoka means the absence of sorrow. Thus Asoka Ashtami or Chaitra Shukla Ashtami rejoices the absence of grief and celebrates optimism that nature brings into our lives.

The Saiva cult in Ekamra Kshetra evolved with Shri Lingaraj as the presiding deity in the Swarna Parbata temple. The Linga of Shri Lingraja  is a shapeless, naturally born stone that rests on a traditionally shaped Shakti. Therefore Shri Lingaraj is otherwise known as Krutibasa, meaning self established – Swayambhu Lingam. The Ekamra Purana indicates that the Deity was originally under a mango tree – Ekamra and was not seen as Lingam in Satya Yuga and Tretaya Yuga. In the Dwapara Yuga and Kal Yuga, it revealed itself as a Linga.

There is a mention of the word Ekamra in the Ananta Vasudeva Inscription (1200-1278 A.D.). It reads, “The province of Utkala where the holy place of Ekamra exists adorned with hundreds of mango-groves, wherein exists a single temple, encircled by several other temples”. This epigraph further describes, “The holy place known as the Kshetra of Ekamra is very dear to Lord Krittivasa, well known for bestowing divine achievements and always decorated with flowers of every season”.

In the temple of Lingaraja, the Swayambhu Linga is worshipped both as Hari and as Hara – jointly worshipped as Shiva and Vishnu thus portraying an accord between Shaivism and Vaishnavism. The Lingaraja is abulated with water several times a day with the mantra –

The above mantra confirms the existence of both Shri Vishnu as Hari and Lord Shiva as Hara, in confluence at the Lingaraj temple in Bhubaneswar.

The Legend of Ram and Ekarmra

As per the legend, during the ferocious battle between Lankapati Ravan and Shri Ram at Lanka, Shri Ram was not able to kill him. It was then that Vibhishana suggested that Shri Ram offer prayers to Devi Shakti and seek her blessings for slaying  Ravan. Thus Shri Ram worshipped Lord Shiva and Goddess Shakti at the Lingaraj Temple at the Ekamra Kshetra for seven days. On the Chaitra Shukla Paksha Ashtami tithi, Devi Shakti blessed Shri Ram with success in his upcoming confrontation with Ravan. Subsequently Shri Ram was able to annihilate Ravana in the battlefield. Lord Ram celebrated this victory by taking out a procession of God Shiva and Goddess Shakti in a chariot on the Ashtami day. From that day onwards, Chaitra Shukla Ashtami is celebrated as Asoka Ashtamias a commemoration  of the triumph  of good over evil.

In Orissa, the 8th day during the Shukla Paksha of Chaitra – the waxing phase of moon, a day before Ram Navami is celebrated as Asoka Ashtami. The day celebrates the absence of sorrow in our lives.

Legends of the Asoka Tree

Meaning –(The day of Ashtami Tithi of Shukla Paksha in Chaitra month is also combined by the Punarvasu Nakshatra, so observing fast on this day is considered highly beneficial. It is believed that fasting on this day and consuming eight buds of the Asoka tree on this day liberates a person from all his/her grief.)

Recitation of the above mantra while consuming the buds of the Asoka tree on this day liberates a person from all his/her grief.

The Asoka tree – Saraca Asoca is a medium sized evergreen tree with bunches of orange coloured flowers that appear on the trunk and the branches. The flowers bloom aplenty during the month of Chaitra , mostly between March to May.

The Asoka tree has a noteworthy mention in the epic Ramayana. Devi Sita after being abducted by Ravan was kept in seclusion at the Asoka Vatika – a garden full of Asoka trees. Sita would lament for hours under the Asoka tree until one day Shri Hanuman spotted her there and then her rescue plan was chalked out.  . It is believed that the Asoka tree became a means of liberating the agony of Devi Sita, hence giving the tree the attribute of liberating sorrows. The association of the Asoka tree with Devi Sita also gives it the name Sita-Asoka.

As per Puranic scriptures, this tree also has association with Kamadeva, the God of Love. Kamadeva included an Asoka blossom among the five flowers in his quiver for stimulating love.

According to another legend, when Devi Parvati asked Lord Shiva about the importance of the Asoka tree, he told her that it is a wish-fulfilling tree. Devi Parvati tested the tree by wishing for a daughter. Immediately a beautiful girl child appeared, Devi Parvati named the girl, Asokasundari.

On Asoka Ashtami,  Asoka leaves are offered on the Shivling. Red ritualistic thread is wrapped seven times around the Asoka tree and parikrama of the Asoka tree is done. After performing the Aarti in front of the tree, a chapter from the Ramayana is read while sitting near the tree.

Legend has it that during Treta Yuga in the month of Chaitra on Shukla Ashtami, Shri Ram visited Ekamra Kshetra during the Vanavasa period of 14 years. Sri Lingaraja received him as a guest and requested him to spend some time at the Ekamra Kshetra. Honouring his request, Shri Ram stayed at the Rameswara temple. Shri Ram’s birthday fell during the period of his stay at Ekamra Kshetra so in order to greet Shri Ram on his birthday, Lord Lingaraja went along with Devi Parvati, Shri Ganesha and Shri Kartikeya on his Golden Chariot, to the Rameswara Temple. Hence the Ratha Yatra of Shri Lingaraja is considered auspicious and continues till date..

The Ratha of Shri Lingaraja was built by Visvakarma in golden colour and was known as Rukma Ratha – made of gold. Locally, the Ratha of Shri Lingaraja is known as Rukuna Ratha that has derived its name from the root word Rukma. According to the Shiva Purana, the right wheel of the Rukma Ratha has Surya Dev. The twelve spokes in the right wheel represent the twelve Adityas who preside over it. The left wheel has Chandrama and sixteen spokes. These sixteen spokes are symbolic of the sixteen digits of the Moon. The four wooden horses represent the four Vedas and Brahma Dev serves as the Sarathi.

On the day of Asoka Astami, idols of Shri Chandrasekhar – the representative of Lord Lingaraja, Devi Rukmini and Shri Vasudeva are ceremonially brought to the 35 ft Rukuna chariot made of Amra -mango wood. The chariot is drawn to Rameswara temple which is at a distance of almost 2 kms on Ratha-Danda. The Rukma Rath remains at the Rameswara temple for four days and on the fifth day, the Dwadashi Tithi, the Deities start their return journey, called Bahuda Yatra, also known as the Swarnadri Bije yatra. After reaching the Lingaraj temple, the Daanachori Viddhi of pacifying Devi Parvati is performed. The Daanachori Viddhi is much similar to the Niladri Bije Yatra of Shri Gundicha where Devi Parvati is pacified by Shri Jagannath for being left at the Shrimandira.