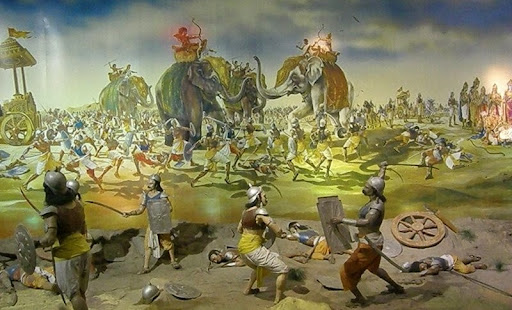 The war, fought over eighteen days on the battlefield at Kurukshetra, was over. The eighteen Akshaunis were no more. Of the countless who took part in the war, the survivors were few – three from the Kourava side (Ashvatthama, Kripa and Kritavarma), and eight from the Pandava side (the five Pandavas, Krishna, Satyaki, and Yuyutsu). The blindfolded Kuru queen, Gandhari, had walked the battlefield, stopping and lamenting over her dead sons and warriors. Her sorrow at the death of all of her hundred sons and the rage at the war that took away so much, and yet restored dharma, knew no bounds. For wasn’t it Krishna who reminded her that when Duryodhana had approached her for blessings during the war, she had repeatedly said, यतोधर्मस्ततोजयः – where there is dharma, there is victory? Wasn’t Krishna himself an embodiment of dharma? For where there was Krishna, there was dharma, and where there was dharma, there was victory [11.17.6]. Yet it was upon Keshava that the weight of her curse (Stri parva) fell. God himself was cursed – a curse that would come true thirty-six years later, unleashing one last round of death and destruction, this time against the Yadavas.

Dhritarashtra’s rage would see him crush an iron statue of Bhimasena [11.11.18]. Yudhishthira too would utter one curse [12.6.10], at his mother, shattered by her revelation [11.27.11] that Karna was the eldest of the Pandavas, and that she had kept this secret his entire life. Yudhishthira, who had waited with bated breath for the news of Karna’s death, now could do no more than recall a filial bond, remembering how his dead elder brother’s feet resembled his mother’s [12.1.41]. Yudhishthira, who had insisted on nothing short of a fight to the death to decide the victor, was now riven by guilt and doubt.

Assembled on the banks of the Bhagirathi river, surrounded by his brothers, the sages Vyasa, Devala, Devasthana, Kanva, Narada, and many others, Yudhishthira sat, unwilling to enter Hastinapura and take over as the king.

Yudhishthira’s lament, after the war, mirrored Arjuna’s predicament before the war. What good could come from killing one’s own? What dharma would one gain from such an act? Arjuna had wanted to abandon karma in the hope that that was the path of dharma for him. Yudhishthira wanted to abandon all karma lest he repeat the act of killing his own. In his words, they had fought like dogs over meat [12.7.10]. It was his attachment to and desire for possessions that had led him and his brothers to behave such, to commit these ‘wicked acts’. The solution, therefore, lay in renouncing all action, for one who had so renounced would not have to go through the cycles of birth and death. [12.7.34]. He would go to a forest, not speak to anyone, go out and beg for food – from two to five houses, and never more than seven, and so on.

This evoked a strong reaction from Arjuna, who rightly asked why and for what had they, the Pandavas, gone through all that they did during those eighteen days.  His brother insistence on conquering the earth only to want to give it back [12.8] was beyond his realm of understanding. Here, Arjuna makes some very sharp observations about abandoning artha for the sake of dharma. Arjuna believed that dharma rested on and existed because of artha. He quoted their ancestor, Nahusha, that ‘Without riches, cruel deeds are perpetrated. Shame on poverty.’ [12.8.11]. Poverty was the cause of degradation in the world. ‘Dharma, kaama, and heaven result from artha. Without artha, the world will not be able to sustain its life.’ [12.8.17].

After Arjuna, Bhima spoke, and as one would expect, Bhima was harsher in his words than Arjuna. His points were similar to Arjuna in questioning Yudhishthira’s dilemma after having fought and won the war. It is worth quoting all the analogies he gives in defense of his argument, as well as the Sanskrit shlokas:

Bhima echoed Krishna’s words that action was inevitable and that there could be no success without action [12.10.28]. The corollary was that ‘if one could obtain success only through sannyasa, then mountains and trees would have swiftly obtained success.’ [12.10.24]