The following is a talk on Mindfulness in Hinduism by Somanjana Chatterjee. The talk was hosted by Silicon Valley Interreligious Council (SiVIC) at the SiVIC Annual Assembly on October 13th, 2019

Namaste ladies and gentlemen. This is a gift to be here today, learning about mindfulness in various faith traditions. I’ll be presenting the Hindu perspective. The earliest texts of Hinduism were compiled, I say compiled as before we had the oral tradition, and the texts were written over generations. These were compiled sometime around 800 BC which were the Vedas – the 4 vast sections categorized as the Rig Veda, the Yajur Veda, Sama Veda and the Atharva Veda. The last sections were the Upanishads, known as the culmination of the Vedas. So they are also called the Vedanta. Ved + Anta = the conclusions. The Upanishads provide a comprehensive textual analysis on the mind, matter, consciousness, our relationship with the universe and what mindfulness means in Hinduism. There are more than 200 known sections of the Upanishads with 108 canonical components.

So what do the Upanishads say?

I’ll recite the Sanskrit verses and then the corresponding meaning in English.

It introduces the philosophical concept of Atman Brahman. The awareness of the consciousness of our soul with the connection of the sacred cosmic soul of the universe.

Talks about the Lord of All – the Omniscient, the indwelling controller, the source of all, the eternal essence of the universe and the ultimate divine reality.

The Upanishads also talk about the concept of Satchitananda – Sat (being, in existence), Chit (consciousness), Ananda (bliss) – the state of perpetual bliss. The philosophy of Non-duality, the Advaita school of thoughts.

So how do we practice mindfulness?

This has been the single-most, profoundly impactful pursuit of every Hindu practitioner, to strive to attain the state of connectivity with the consciousness of our soul and the soul of the supreme being, that is the path to salvation or Moksha, liberating oneself from the cycle of birth, death, re-birth.

There are textual references to “dhyana”, deep meditation and throughout thousands of years our sages, prophets and individuals have pursued it. But the process is not just about renunciation of the material world. The process entails the realization of inclusivity with our surroundings. There are various references in the Vedas about our relationship with the sun, the moon, the earth, the plants and animals. Specific Vedic hymns are dedicated to these components – our collective ecological existence. Also, the Vedas propose our duties (Dharma) and obligations catering to the 4 stages of life – Brahmacharya (the pursuit of learning), Garhastha (the pursuit of wellbeing in the family, community, humanity realm), Vanaprastha (the pursuit of detachment) and finally Sanyas (pursuit of the divinity). Then there is mindful diet, treatments (Ayurveda), the 5 yogic pillars being: right breathing, right intention, the right nutrition, right movement and right relaxation.

So how are the Hindu theosophical texts relevant to the evolution of human civilization?

As a seeker, a student of the Vedanta, it’s very fascinating to me, how the philosophical concepts impacted and inspired various faculty of research in science. We witness a convergence of science and religion. For example, particle physics, the Quantum Theory. The Upanishads outline a cosmological framework of reality that certain principles of QT align with. The concept that proposes, consciousness appears to exist in a state of ‘complementarity’. Which is, both at the infinite, non-local level and that at the finite, localized realm. Generally speaking, we perceive the reality from the perspective of time-bound, fragmented, linear manner, whereas, as per the texts, the state of happiness begins by first dismantling the cognitive filters that veil the reality and create the perceptual illusion (Maya). The field of neurosciences. Specifically from the Taittiriya Upanishad, we find the interpretation of the self – the mind, awareness, guidance, intelligence, foresight, wisdom, perception, memory, intention..love.

The discussion brings us to the philosophical concept of Karma – our actions, deeds, and the consequence of it.

From the chapters of Brihadaranyaka Upanishad: Accordingly as one behaves, so does one become. The doer of good becomes good, virtuous. The doer of evil becomes evil. Inaction is then, a potential loss of good karma if the intention behind the inaction was to shrink one’s responsibilities and cheat the system.

To conclude, as Hindu practitioners, as a community, we have a spiritual obligation towards cultivating ourselves, cultivating the mindful way of living as our texts advocate, in reference to humanity, to our environment and the universe.

May good befall all.
May there be peace for all.
May all be fit for perfection.
May all experience what is auspicious. 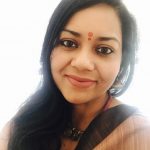 Somanjana Chatterjee is a California based writer, editor, activist and thought leader. She has been the initiator to various projects in the media, education andRead more