Mahabharata Metaphors: The Penance and Reformation of Agni 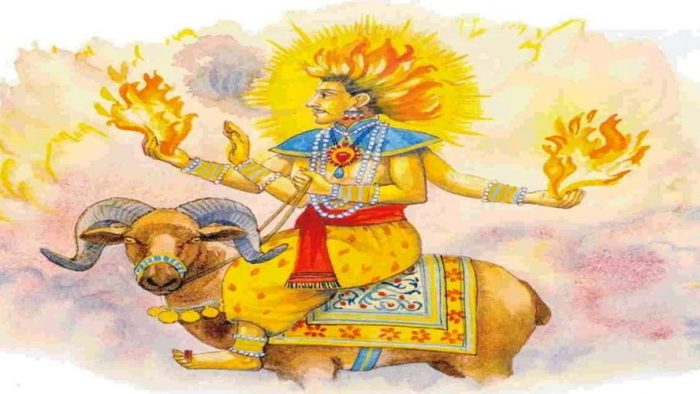 In the Vanaparva, Sage Markandeya narrates fascinating stories to Yudhishthira – greatly philosophical and metaphoric. It is both Yudhishthira’s universal curiosity and Markandeya’s opportunity to shape a great emperor of the future. One such series of stories are about different forms of Agni. Each Agni performs duties related to specific aspects of life as envisioned in the Purushartha framework and the notion of yagna. Agni, the vigour of life, the source of all action in creation must walk in specific paths of transformation for his vigour to be brighten the universe. That is a penance of sorts. If Srishti must fulfil itself, this penance is required. Agni must go through this penance so that it does not burn the universe but aids Lord Brahma in Srishti and other Devas in the protection of Dharma. The vigour of Agni must be contained. Among these, there are two intriguing stories about two forms of Agni – Yagneshwara and Saha. In some ways, these two stories on the other side of a related story in Adi Parva, where Agni is cursed by Bhrigu, with which Mahabharata nearly starts.

Once, Sage Angirasa, having established his own Ashrama, performed immense penance and austerity and attained all powers of Yagneshwara. At that time, Yagneshwara was performing penance deep inside water. He was disturbed by the power and grace that Angirasa had obtained that was equal to that of Yagneshwara. He worried that Lord Brahma had created a Prati-agni, an alternate Agni, and that his own status of Agni, agnitva, would diminish. How would he regain it at all? He slowly arrived at the Ashrama of Sage Angirasa. The sage was in such a glow that it enlightened the entire universe. Sage Angirasa smiled upon the arrival of Yagneshwara. In one look, he realized the concern of Yagneshwara. He said “Oh Yagneshwara, I recognize your concern, I am aware of it. I do not have any intention of being the Agni forever. You are the one entrusted with the responsibility of glowing the universe in the night. Please return to your original position and eliminate the darkness of the universe.”

Yagneshwara said. “Oh, great Maharshi! Please note that I have lost my grace and name. Today, you are the one glowing and the universe thinks you are the Yagneshwara. They are in total ignorance of my existence. For me to exist, let me establish my own self inside you. Let you be the first Agni. I shall be the second and with your grace I shall glow”. Angirasa gave a different solution to the problem. “Agnideva – You need not establish yourself inside me. Make me your son ie., be born to me as my son – for in my son I shall always be there. Please continue to be the Agni and glow this universe as my son”. Yagneshwara, the Agnideva, agreed and graced him a son, who was the Sage Brihaspati. The intrigued Devas, learning of the birth of Brihaspati, learnt of the details of the divine birth and made him as their Devaguru. Brihaspati, then guided the Devas in all their duties of protecting Dharma-s of different aspects of the universe.

The second story is about an Agni called Saha. There was an Agni called ‘Saha’ born in water. His wife was Mudita and had a son called Adbhuta. Adbhuta is the Agni that is the lord of all life and the one wearing all the universe. Saha had other children and each entrusted with unique responsibilities of holding the universe and serving other Devas. However, Saha himself, the first Agni, was outside the reach of all Devas. Adbhutagni’s son was Bharatagni or Niyatagni. Niyatagni performed the duty of burning the animals. Saha was very averse to meeting his grandson Niyataagni – the one who performed the final rites of the dead. Once they were accidentally about to come face to face to each other. Saha, keen to avoid Niyatagni, vanished and hid himself in the ocean. The Devas though were very keen to meet Saha and went in search of him. While there were other Agnis, Devas needed the Saha to carry specific oblations to them. He alone could receive the offerings of some yagnas and reach them to the Devas for them to be filled with the vigour and perform their duties of protecting the dharma. Saha was tired of Devas constantly being in search of him. He reached out to his friend Atharvana and sought his help in carrying oblations of yagnas to the Devas. Atharvana agreed and Saha simply vanished without a trace into the ocean. However, the fishes in the ocean traced him and revealed his presence to the Devas. Saha cursed them to become food for people and be drawn out, killed and eaten without stop. Devas prevailed upon Atharvana to convince Saha. Atharvana agreed and made his best efforts but Saha would have none of it. He simply would not carry oblations to the Devas. The deadlock continued.

Eventually, Saha became so intolerant of his own body and renounced it. With only his grace remaining, Saha occupied the centre of the Earth. From the body that he renounced Earth was filled with wood and trees, highly valuable gems, clouds. Saha filled the crust of the earth with ores. Thus, having renounced his body, Saha then performed an immense Tapas. After many years, Sages such as Angirasa and Bhrigu woke him up. Saha had an altogether different body and with an accentuated grace, bright and glowing. Atharvana, the other Agni, was waiting for Saha and return the duty of carrying oblations to the Devas. But Saha was not ready yet and once again he went into the Ocean and hid himself in. Tired of all this, Atharvana had temporarily stopped carrying the oblations to the devas, making them very weak. The universe trembled. In the end, Atharvana shook the entire ocean and fetched Saha out of the ocean. His coming face to face of Saha resulted in the creation of many new exalted worlds. Thus, Atharvana’s efforts fully placed Saha in his rightful position of carrying oblations of all yagnas to the devas. Saha now began to perform his duty of carrying oblations to the Devas.

The two stories are extraordinarily metaphoric and filled with compelling imagery. The common element in both stories is the performance of penance by Agni in the ocean – that is water. Physically water is the element that extinguishes Agni – it is the opposite. The vigour of life must perform penance facing the opposite and tempering itself – only then can it brighten the life. The special aspect of these stories, in both, the Agni-s are self-aware of their excessive vigour and seek a penance to temper themselves. This is the essential aspect of great Srishti. Civilizations which appreciate this aspect sustain and thrive. The modern society of Industrial Revolution is yet to recognize this.

The first story has an additional element. Our absence, even if that is penance, may mean the emerging of an alternative. We should have the ability to engage with the alternative upon return. Yagneshwara’s humility makes him recognize the alternative and submit himself to the same. In that beautiful engagement results the best outcome for the universe. If Yagneshwara had established himself within Angirasa that would make Yagneshwara merely a dependent of Angirasa. The universe would not benefit much. However, in the metaphor of becoming the son or gracing him with a son, represents a creative engagement between the two. Angirasa respects Yagneshwara’s place and Yagneshwara respects Angirasa’s power. They create something very new out of their vigour – an extraordinary Srishti – a priest to the Devas themselves. This results in an engagement that results in a new Srishti that has both their powers. In this process, Yagneshwara regaining his Agni status and Devas are blessed with priest for their Yagna. Angirasa continues to be a great sage and a source of Agni. This is a perfect case of Sristi – where all elements of vigour very positively engaging with each other.

The second story represents an Agni that is aware of his necessity for the universe as well as his excessive vigour – the positive vigour of Saha is unable to accept the destructive power embedded within. The process of coming to terms with the destructive power is complex. You cannot negate yourself even if your concern is about your negative powers within you. Its futile to push your responsibility to somebody else – what is yours, you alone must do – this is a fundamental aspect of Srishti. Devas respect the universal cosmic order. Atharvana cannot perform Saha’s duties this forever. In the end, Saha finds a way to relinquish the body and find the most fundamental element of his vigour, that positive element, which aids the Srishti of different forms life and universe. Once Saha finds it, he comes to terms with himself. This is the awakening represented by Angirasa waking up Saha and then Saha becomes ready to perform his duty of carrying oblation to the Devas.

Civilizations must constantly perform this penance – great forces of creation within the civilization must have this self-awareness to recognize their burning power and find forms of themselves that can then glow their worlds. They must have the ability to recognize and engage with Angirasa, find and trust Atharvana – yet know that they must eventually carry oblations to their Devas. They must seek transformations to become creative for the society and life. Of course, we need Markandeyas within our systems who are capable of nurturing Yudhishthira-s and a willing Yudhishthira with curiousity for such sensitivities. Our creative forces of the civilization should be willing engage in this manner in the quiet environment of a forest where there is an opportunity to realize a silence within and perform an inward journey.

We need the ability to recognize the Markandeyas within.