Mahabharata Metaphors: Dharmavyadha imparts the Essence of the Vedas to Kaushika Part II 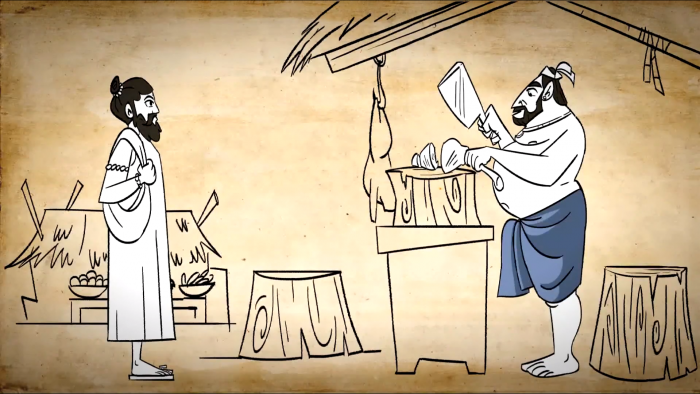 The story of Dharmavyadha in Vanaparva of Mahabharata is quite famous. It is often referred for its a balanced perspective. It clearly establishes that the destination of knowledge is reachable from all walks of life. One can and must grow in the path of the Dharma irrespective of where one belongs to. The realization of the Supreme is equally available for all in society.

Where one is at this point in time ought not to become a limitation. Neither should it become a matter of humiliation. Of course, what one should do, from wherever one is – should be in the path of Dharma. That alone must be put to inquiry and discussion. The recognition of this fundamental reality drove the design of life in Bharatamandala. This empathy is an integral part of every branch of the tree of Sanatana Dharma.

Brahmana Kaushika could not sleep well. Neither could he perform his daily rituals with peace. He sat with his adhyayana, but every few minutes broke and got aside only to return in a short while. But that did not put an end to what was ringing in his ears – words of the Grihini.

She had said what she had in the same poise and without escalating the tone even once. Yet, it rang in his ears loud, long after he had returned from her house. ‘Only one thing can relieve me of this pain’ he thought ‘I must go to the Mithila Nagari immedia’.

One fine morning, Kaushika completed his ‘vidhi-s’ of the morning and set out towards that great capital of Videha, the city of Mithila. He went through the roads, forests, ponds and rivers. Finally he reached the beautiful city of Mithila – a city of broad roads, enchanting houses, busy markets, joyous people in a colourful setup.

There were houses with seven stories and the city was embellished with gardens. But Kaushika’s mind sought only one thing – realization of Dharmasookshma from Dharmavyadha, as suggested by the Grihini. The Brahmanas on the way guided and led him to reach Dharmavyadha at his shop, where he was busy with his Kuladharma.

The Brahmana stood at a distance beneath a tree. Dharmavyadha’s shop was full of people seeking to buy meat from him. He was busy for a long time, attending to each of them. Finally, when he finished his work, he noticed Kaushika, standing at a distance but eyes firmly on him.

He allowed himself a gentle smile. He came down to the place where Kaushika stood and respectfully sought “What can I do for you, Oh Brahmana? Of course, I am aware who has sent you here. It is that great Grihini. 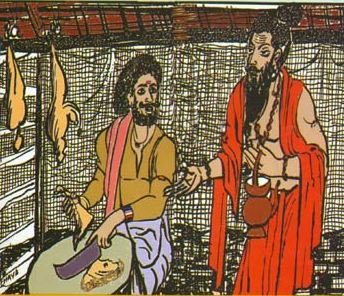 But, Brahmana, this is not a suitable place for a person such as you. Please come with me and grace my home”. Kaushika remained silent for a moment. ‘How did Dharmavyadha know that it was the Grihini who sent me here’. He thought of how the lady herself had known of the stork’s death. As Dharmavyadha led him to his house, infirm steps, just a little ahead of him, Kaushika walked along filled with the emotion of surprise.

They reached his house. Dharmavyaadha comforted Kaushika with an appropriate seat. Kaushika ran his eyes through everything in the house. The atmosphere of the house was not the same as what he had imagined. ‘This is the abode of a Satvika purusha’ thought Koushika.

For a few moments, Kaushika let himself be filled with the thought. “Hey, taata” Kaushika broke the silence eventually. Dharmavyadha was an elder, after all. ‘Selling meat – Does not seem to be an appropriate task for you, taata. Pray, tell me, Why are you doing this?’.

‘How many more Kaushikas will have the same question’ Dharmavyadha smiled. “Oh Brahmana, It is my Kuladharma”. That is all he really wanted to say. Kaushika nodded. But Dharmavyadha knew he had to continue. “At any cost, under any circumstance, Oh Brahmana, a Kuladharma is not to be insulted or demeaned.

This is the dharma ordained to me by the supreme and I bow to the supreme. It is my Karma that I must do this and I go about with it in as much devotion”. The situation had quickly moved to a space of comfort for Kaushika – a discussion and an exploration. Kaushika raised many questions on Ahimsa. How could the Dharmavyadha, so sensitive to Dharma, be so insensitive about Ahimsa. Dharmavyadha smiled “Brahmana, I merely sell the meat, I do not kill.

You must know that one might be indulging in Krourya within a Kuladharma, but one may still be a Saadhu in the entire life”. A long conversation ensued between the two. Dharmavyadha laid the entire world of Kuladharma and Svadharma threadbare. Svadharma is the natural dharma of the person. It is the result of the self and the context of the self.

It is never to be abandoned and disrespected. Where we are is the result of the flow of the universe and the acts performed in all of the past. One has the freedom of action in the present life. One can seek a different space in the future. But being in the context, one must perform every duty that comes within the context. It is only the performance of duties that enables us to transcend the current space and Kuladharma.

‘It is entering the realm of the subtle’ thought Kaushika. He sought to know what is the nature of Shishtachara, the righteous conduct, within a kuladharma. The conversation then moved to the Yagnas and the Brahma Sakshatkara.

How does one perform a Yagna, how does one strive for Brahma Sakshatkara? They went around the universe of all that one must do in life. Kaushika thought ‘the man speaks with the clarity of a Veda Shastragna’.

Finally, they came back to where they started – Ahimsa again. “All of us indulge in some form of Himsa, Oh Brahmana” – Dharmavyadha knew what bothered Kaushika. ‘Just a few days ago’ wondered Dharmavyadha ‘the same Kaushika burnt an innocent stork to ashes’. ‘Another sookshma’ thought Kaushika.

Dharmavyadhha then explained how in different kuladharmas different kinds of violences take place. Some with the knowledge of the doer or some without, sometimes aware of the violence or sometimes not. However “Karma performed according to Dharma, with Ahimsa held firmly in mind, purifies the Vritti, Oh Brahmana, even where there is violence’ said Dharmavyadha. “The Shastras do not forbid one from eating meat but one must do so with a sense of offering.

One cannot leave the Kuladharma. But one can perform Karma to realize a different Kuladharma in the future. Every Vritti is created by the Supreme for the times and hence Dharma”. ‘Aha’ thought Kaushika ‘There is a lot of sookshma that I must appreciate’. Finally Dharmavyadha nailed it. “Everybody thinks that their Vritti is most Dharmic, O Brahmana. In reality all of them are but for the respective”.

Kaushika lowered his eyes. Many moments of silence passed. It was time he sought guidance on the Sadhana for Adhyatma – he thought. He then sought to know the importance of Truthfulness, the eternity of life and Supreme, Adhyatma, the nature of Brahmanya, the 5 fundamental elements of the Universe – the Panchabhoota and the nature of Prana Vayu.

Finally, he sought the knowledge of Moksha. Dharmavyadha spoke and Kaushika listened, for eternity. All that he had realized by the mere performance of his Svadharma and Kuladharma, Dharmavyadha shared with Kaushika – the Brahmana. Like a true disciple Kaushika received it.

‘How does a Dharmavyadha have the clarity and the perspective of a learned Vedic Scholar’ Kaushika thought, ‘Without going through the discipline of scriptural study. Are the Svadharma and performance of Kuladharma of such consequence?’. Dharmavyadha smiled. ‘Oh Brahmana, I know what you have in mind. Please come, I will take you to my parents’.

So saying he led them into a space inside the house where his old parents were resting. The elderly couple stood and welcomed the Brahmana. They offered him a seat, one deserving of his status, honored him with what he should be. After settling his comfort, they sat around him. Kaushika blessed the family as a true Brahmana should. ‘They are Satvika-s, they are Dharmika-s’ a voice rang in Kaushika’s mind filling all his self. He eagerly waited for what Dharmavyadha had to say next.

This story is about the grounding of the Brahmana Kaushika. If the Grihini stuns him like a thunderbolt creating a spark in his mind, Dharmavyadha transforms that spark to an absolute realization – gradually and step by step. The Brahmana had learned to appreciate Dharma within his world, but now sees it in a larger context. Dharmavyadha elevates the Brahmana from the obvious rules of Dharma to the deeper principles beneath it. He enables him to appreciate not just the Dharma, but the very Ruta – the flow of the Universe.

In that flow, if there is a Vritti (profession) that one is performing as a Kuladharma, then that is already elevated. It is an integral part of the Satya of the times. One has no control over how one has reached that point in life. But one has absolute control of how one can function having reached there. Hence, one can be a Dharmika from all walks of life.

That very Dharmikata will create a way for the one to escape from any Adharmikata in the path. This is a grand realization for the Brahmana who lived within the shell of his way of life. The Brahmana learns the futility of his arrogance as well as the meaninglessness of the source of his arrogance. Dharmavyadha brings that realization to Brahmana that determining Himsa or Ahima is not easy. It is in one’s mind and thought that Ahimsa must be nurtured.

That thought will eventually flower into appropriate action as required by the Kuladharma of the person. Hence, evaluating Ahima or Himsa in a universal form is not correct. At the same time, Dharmavyadha absolutely acknowledges that there is Himsa and the need to reign it. Everything must be offered to the Devas before performing and consuming. It is this principle that governs how an act gets elevated to kuladharma. It reigns in the extent of himsa to the bare minimum.

Beyond everything, the Brahmana learns that the path of realization of the Supreme is open to all equally. The wisdom of the Grihini had already brought some humility in him. The wisdom exposition of Dharmavyadha fills him completely with humility. Kaushika realizes it is not just from his scholarly Vedic path, but from every walk of life, it is possible to reach the Supreme.

It is this realization and the organization of life around it that has sustained our Civilization and kept the society in harmony with all its contradictions. For this wisdom, we bow to the sages and ancestors of Sanatana Dharma.