Mahabharata and Snakes- A Fascinating Connection 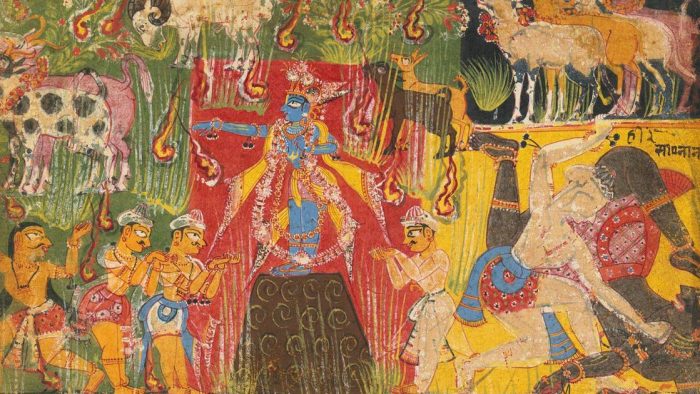 How does the narration of the Mahabharata start? Of course, we know that sage Vyasa composed it, and the first public narration of the epic occurred at Janamejaya’s snake sacrifice (sarpa-satra), where his disciple Vaishampayan narrated it at Vyasa’s instruction. It is another matter that the Mahabharata we read is Lomaharshana’s son Ugrashrava’s (also known as Sauti), account of the narration at the twelve-year yajna at sage Shaunaka’s ashrama in Naimisharanya.

The first public narration of the Mahabharata took place only after everyone associated with the war had passed on. The last such person was Parikshit. Yes, in case you have forgotten, the last weapon fired in the war was directed at Parikshit.

Let’s start with the beginning – Janamejaya’s sarpa-satra. The sacrifice was meant to destroy Takshaka and his relatives. The sacrifice threatened to wipe out the entire race of snakes. Many snakes indeed perished in the yajna’s fire. But we also know that the sarpa-satra ended prematurely, without achieving its objective. It was brought first to a temporary, and then a complete stop because of a young Brahmana named Astika. Why did Janamejaya want to destroy Takshaka? Because the snake king had bitten to death Janamejaya’s father – Parikshit.

Why did Takshaka kill Parikshit? Because of Sage Shringi’s curse.

Who was Shringi and why did he, a young sage, curse Parikshit to be killed within a week?

Because of a snake. Specifically, a dead snake. Out on a hunt, deep in the forest chasing a deer, tired and hungry, Parikshit mistook Shamika’s, Shringi’s father, vow of silence as a deliberate slight, and in a moment of anger, draped a dead snake around Shamika’s shoulder. When he heard of it, Shringi cursed Parikshit to die of Takshaka’s bite.

Why Takshaska? Yes, he was the king of the serpents, but why him specifically? The reasons are multi-faceted.

Coincidentally or not, it was because Arjun, Parikshit’s grandfather, along with Krishna, had burned down the forest of Khandava at the request of Agni. In that raging fire that consumed Khandava, Takshaka had escaped, but his wife was killed. The fire of revenge burned since inside Takshaka. If Shringi’s curse became the vehicle for the fulfillment of his revenge, not against Arjuna but against his grandson, so be it.

But that is not all, that there is to the Khandava tale. Ashvasena, Takshaka’s son, had escaped from the fire. He bided his time for more than a decade, ending up on the head of an arrow in Karna’s quiver. That arrow was shot at Arjuna by Karna on the fateful seventeenth day of battle in Kurukshetra. Arjuna survived, but only because Krishna’s intervention, who stepped down on the earth with his foot, causing the chariot to sink a few inches. The arrow took off Arjuna’s crown, but not his head.

The Mahabharata, in a way, comes to an end with the death of Parikshit, at the hands of a snake.

The narration of the Mahabharata also comes about as a result of snakes. Specifically, the same snake – Takshaka.

This much is clear. In what I can only describe as exquisite genius, the Mahabharata weaves several tales, each connected to each other via the common strands of snakes and revenge, the inevitability of the snake sacrifice drawing ever so closer with each story.

Janamejaya’s advisers did not tell the king about the circumstances of his father’s death. Uttanka did, who went to Janamejaya’s court, and berated the king for wasting his time in trivial pursuits instead of exacting revenge on Takshaka, who was responsible for his father’s, Parikshit, death.

Uttanka was one of the disciples of the sage Ayoda-Dhaumya. When Veda, another disciple of Ayoda-Dhaumya, had to leave to officiate at a sacrifice, Uttanka was asked to stay, and serve his preceptor’s house. He then went to king Paushya to obtain his queen’s earrings as a gift for his preceptor’s wife. Having obtained them, as Uttanka returned home, the earrings were stolen by Takshaka, who coveted those same earrings. To cut a long story short, Uttanka managed to retrieve these earrings, and gift them to his preceptor’s wife, but his resentment against Takshaka lingered. To exact revenge, Uttanka went to Janamejaya.

As an aside, one of the priests that Janamejaya took on was Somashrava. Somashrava was the son of Shrutashrava. There would be little notable about this, except that Somashrava had been born to the womb of a snake!

There is still more left to Takshaka and there is yet another reason why he and the snakes were destined to suffer the danger of destruction in the snake-sacrifice. So let us ask ourselves again – who was Takshaka?

Takshaka was the fourth child of Kadru, one of two wives of sage Kashyapa. The other wife was Vinata, whose first son was born semi-deformed, and went on to become Arun, charioteer to the sun god. Kadru’s sons were the snakes. While Takshaka became king of the serpents, Shesha sought a life of devotion, and became known as Ananta, holding the earth up, and is sometimes also seen as an incarnation of Vishnu. Kadru had cursed her children – the snakes – to suffer destruction at the hands of Janamejaya’s snake-sacrifice. Why she pronounced this curse is a tale for another time.

The snakes debated on possible ways of avoiding or mitigating the effects of this curse. Eventually they decided to marry their sister, Jaratkaru, to a Brahmana named Jaratkaru. Yes, there is a tale behind the husband and wife having the same name, but let’s leave that for another time. They had a son. That son was Astika, and it was he who brought the snake sacrifice to a premature end, thereby saving the snakes from destruction.

How do we end up learning about Astika? Through a story told to Ruru by his father, Pramati. Why did Ruru ask Pramati to tell him the story of the snakes were saved at Janamejaya’s snake-sacrifice by a Brahmana, Astika? Because of a Brahmana, Sahasrapata, who was cursed to become a dundubha (a non-poisonous snake).

Ruru was the grandson of sage Chyavana and Sukanya, and the son of Pramati and Ghritachi. He was engaged to be married to Pramadvara, the daughter of Menaka and Vishvavasu, the king of the Gandharvas. She was bitten by a snake and died, and was brought back to life only with Yama’s approval, when Ruru agreed to give half his life to Pramadvara. Thus Ruru’s dislike for snakes.

Why did Sahasrapata, a Brahmana, get cursed to become a snake? It turns out that a young Sahasrapata had once played a prank on his Brahmana friend Khagama, by scaring him with a snake made out of blades of grass. A frightened Khagama cursed Shahsrapata to be turned into a snake, and be released from the curse only by Ruru.

Just as Ananta is the endless snake that holds up the earth and serves as Narayana’s seat, so do snakes connect the beginning and end of the endless epic that is the Mahabharata.