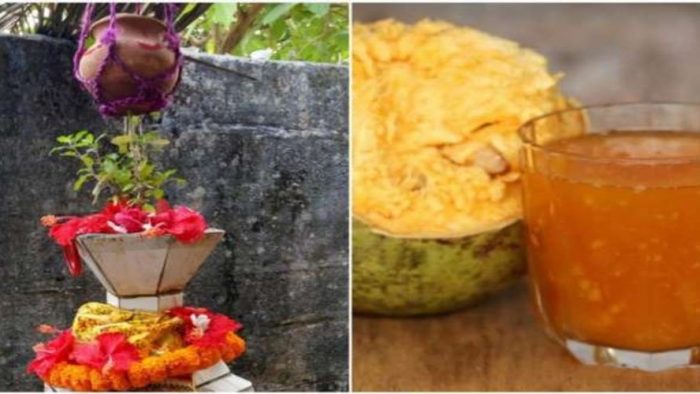 The day of Vaisakhi in Northern India, Vishu in Kerala, Bihu in Assam is celebrated as Maha Visubha Sankaranti in Odisha. As per the Jagannath temple chronicles, the day is celebrated as the Solar(Sauramana) new year by the Hindus of Odisha. Maha Vishuba Sankaranti also known as Pona Sankaranti in Odisha, marking the onset of the summer season. The new Odiya Almanac comes into effect from this day. It is believed that Hanuman, an ardent devotee of Shri Ram comes to pay a visit to him at the Jagannath temple. According to Hindu scriptures,  Lord Jagannath is considered as an incarnation of Sri Ram in the Kaliyuga. The day is also celebrated as Hanuman Jayanti, marking the birth anniversary of Shri Hanuman. As per tradition hand-made umbrellas, made with palm leaves are offered to the Gods.

According to Vedic jyothishya, Sankranti is the movement of the Sun from one Rāshi (constellation) to the next. There are 12 Sankranti in a year. The astronomical positioning during this time of the year suggests that the Sun transits into the Aries constellation and is placed over the Visubha Rekha (Equator) – hence the name Maha Visubha Sankranti. This transit generally happens on the 13th or 14th of April every year and the date is set with the solar cycle of the luni-solar calendar. Annually it is only on two occasions that the sun fully rests on the equator, once during Mesha (Aries) Sankramana and once again during Tula (Libra) Sankramana. Every year on these two days, the length of days and nights are equal. After Mesha Sankranti the Sun moves in the northern direction to the north of the equator. It is therefore, from this day the Hindu new year begins. The day is also known as Mesha (Aries) Sankranti or Meru (Sun) Sankranti.

Pona -An Antidote For Summers

An important activity in Orissa is the preparation of a ritualistic drink called “Pona” or Pana . At the Jagannath temple in Puri, the three deities – Lord Balabhadra, Devi Subhadra and Lord Jagannath are offered a slushy sweet and tangy raw Mango drink or the Amba (Mango) Pona. The New Hindu calendar ‘Jagannath Panji’, also known as the ‘Khadiratna Panji’ is also brought into use and the ritualistic proceedings of the temple are planned accordingly.

In other temples and homes across the state the slushy Pona is traditionally made by mixing together ripe wood apple pulp, chickpea flour, ripe banana, yogurt, jaggery, pepper powder , coconut shavings and cottage cheese into a smoothie-like consistency . The drink is put into a small earthen urn with a small hole in the bottom and is hung above the Tulasi plant as an offering. Tulasi also known as Brundabati is considered to be Goddess Lakshmi, The Goddess of wealth and prosperity. The slushy drink drips in drops over the Tulasi Plant as an assurance that even in the summer she will be looked after with extra attention and care. The Tulasi plant is covered with a straw thatched roof assuring her shady comfort from the rising temperatures and the scorching sun that will be increasing in the times ahead. Here the Tulasi represents the entire flora of the region that would be struggling in the heat and the Pona represents the cool assurance and remedy from the heat. On this day Bel(Wood Apple) Pona is a must have drink.

According to the Bhavisya Purana the day is also celebrated as Jal Sankranti. According to a legend, during the battle of Kurukshetra, as Pitamaha Bhishma, the grandsire of the Kauravas and the Pandavas lay on the bed of arrows awaiting the end of his life, he was thirsty . There was no water available in the battle-field. In order to quench Bhisma’s thirst, Arjuna with his power pierced an arrow deep into the Earth. A stream of water immediately threw up to satiate the thirst of Pitamaha Bhishma. Out of satisfaction and kindness, Bhishma declared that those who would offer water to the thirsty on this day would be free from all sins and the departed souls of their ancestors as well as the Gods in heaven would be pleased. On this day Hindus all over the country offer cool drinks to thirsty people as a religious responsibility.

This year Maha Vishuba Sankranti falls on the 13th of April, 2020. The date will usher in the new year and bring into use a new calendar for the Odiyas. The summer season will be given a silent welcome as the celebrations this year will be confined to the indoors, abiding the Corona Lockdown.  Every prayer offered will be made to make the Earth pandemic free and safe for all.

The prayer translates to –

Let all be Happy, Let all be free from illness,
Let all see and experience the auspicious,
Let no one suffer in grief.
Om Peace Peace Peace