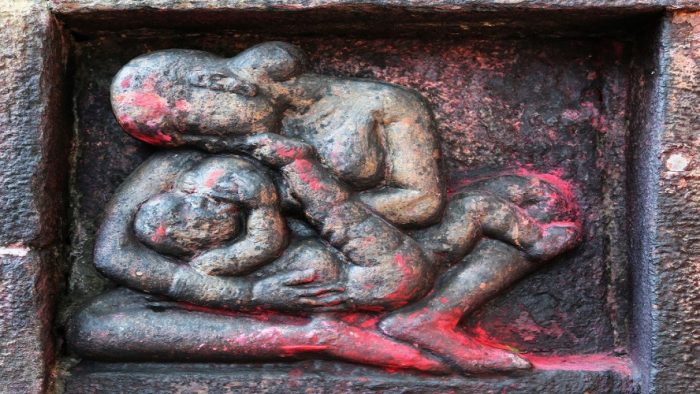 Kunti did not abort Karna. Perhaps the swiftness with which Karna was born after her union with Lord Surya did not afford her the opportunity, or perhaps she did not want to, since feticide was an abominable crime. In any case, what the Mahabharata tells us that she did not keep this child. She abandoned him, and the infant was found by the charioteer and raised by his wife, Radha, as their own son. Kunti went on to marry the Kuru king, Pandu, becoming the mother of the five Pandavas. Three of the sons were hers, and two were Madri’s. Had she allowed herself to be stained with the stigma of unwed motherhood, perhaps there would not have been a Kunti as we know her. She would not have been even a footnote in the Mahabharata.

What happened after Kunti abandoned Karna? He grew up to become a warrior, a thorn in the side of the sons of Kunti, and on whose account her eldest son, Yudhishthira, could not sleep for thirteen years. Even when push came to shove, and when there was one last opportunity for her to stave off the fratricidal war that loomed, Kunti could do no more than ask Karna to spare her other sons’ lives. Karna made this promise to the mother he had never had, and the count of Kunti’s sons stayed at five.

Try as she might, Kunti’s indiscretion stayed with her all her life. What if she had aborted the fetus? An unimaginable sin, but let’s stay with that thought for a moment with that thought. Yes, what if she had? We do not need to indulge in speculation, because we have the example of Gandhari to complete this what-if scenario.

Gandhari did abort her fetus. Yes, with her own hands. Frustrated with the inordinate length of her pregnancy and more so after hearing of Yudhishthira’s birth, she struck her belly forcefully, causing the fetus to abort.

What happened after that? Gandhari did give birth to sons. Not one, two, but a hundred sons, and one daughter. A hundred and one fetuses did Krishna Dvapayana carve from that one aborted fetus. Gandhari became a mother. Her eldest son, Duryodhana, would become best friends with none other than the fetus that Kunti did not abort – Karna, and rule over the Kuru kingdom while his cousins, and Karna’s younger brothers, spent thirteen years in exile.

As the war loomed, and Duryodhana came to Gandhari for blessings, what could Gandhari do but utter, “यतो धर्मस्ततो जयः” – “where there is dharma, there is victory”.  And? Duryodhana and the Kaurava army was annihilated by the Pandava army.

Neither Kunti nor Gandhari could outrun the decisions of the womb that they made. It is a matter of conjecture as to what may have been if either had chosen differently. What we do know is that the decision to act the way they did had consequences that neither foresaw or expected.

What do we take from this? Abortion, or abandonment after conception, are choices not to be taken lightly. Indiscretions of youth have consequences, even when we believe we have moved ahead of those choices. The past never dies. The movement of the wheel of time – kaalchakra – means that what goes around, comes around. Pretending it is not so is but one of the many follies of the human ego. A timeless lesson from a timeless epic.