How do you curse God, and do it justifiably so? What is the arc of the geometry of rage? Does it rise up into a crescendo and then subside after it has found an outlet? Or does it ebb and flow, crest and trough? How does one react to being cursed? How would God react to such a curse? As curses go, there are many instances in the Puranas of gods being cursed. Indra is perhaps in the unfortunate position of being the recipient of the most curses. Even Vishnu was cursed by Narada to be born as a human. Dharma was cursed, and was born as Vidura. The Vasus were cursed and had to be born as the sons of Ganga. But a god being cursed? Gandhari cursing Krishna is possibly one without parallel. Not only did Gandhari curse Krishna, she cursed his entire tribe, the race of the Yadavas. In it, there are several lessons to be learned. 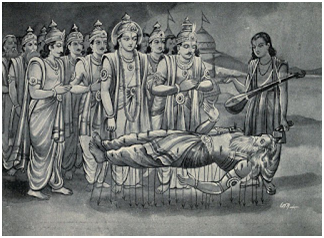 Gandhari’s rage rose when she met Bhima after the war. All she could ask him in an anguished voice was, “Why did you not spare one, one who had committed the least crimes? O son! … For these blind and aged ones, why could you not have saved a single one?” [11.14] A reasonable question, one would think. Bhima could only point to the injustices meted out to the Pandavas, but that did not quell her rage.

Gandhari’s rage found an outlet, both physically and emotionally, when Yudhishthira came in front of her. Her gaze burned Yudhishthira’s nails, causing Arjuna to hide behind Vasudeva in fear. It then ebbed, and she found the equanimity to console Droupadi, who had also lost all her five sons – “O daughter! Do not grieve. Behold. I am also miserable. I think that this destruction of the worlds has been goaded by destiny. … One should not sorrow over those who have been killed in a battle.”

It seemed as if Gandhari’s anger had been calmed. But it was not so.

Gandhari, Yudhishthira, Krishna, and others from the Kuru family proceeded to the battlefield, where Gandhari came by the dead Kauravas, one by one. As they walked the battlefield, the sight was a gory one. Thousands upon thousands of warriors lay dead, with frantic women running to identify their dead husbands, hope mixing with sorrow, anticipation with dread. Gandhari saw everything with her divine sight, and her commentary is as brutal as it is moving. War is not cinematographic, with surround sound, zoom shots, and nor is it anti-septic. It is brutal, ugly, and real. Gandhari’s account of what she saw is moving.

“They were being devoured by predatory beasts there, by jackals, wild crows, crows, demons, pishachas, rakshasas and many kinds of beings that roam around in the night.” [11.16]

“Their limbs used to be smeared with the paste of sandalwood and aloe. They are now lying down in dust. Vultures, jackals and crows are tearing away their ornaments.” [11.16]

“Having lamented a lot, some have become quiet. The women no longer know what another one is lamenting. Some have lamented and shrieked for a long time.” [11.16]

“There are horrible heads without bodies and bodies without heads, a sight that arya women should not see. On seeing this, they are delighted and confused at the same time. Affixing a body to a head, they are glancing at it senselessly. Miserably, they are saying, “This is not he. He is somewhere else.”” [11.16]

She walked by, stopped, and lamented Duryodhana, Duhshasana, Vikarna, Abhimanyu, Uttara, Karna, Shalya, Sudakshina, Lakshmana (Duryodhana’s son), and others. When Gandhari saw Shalya, maternal uncle to the Pandavas, she saw that his handsome face had been pecked by wild crows, and his tongue was sticking out. Virata’s body was being torn apart by vultures, jackals and crows. [11.20]

Gandhari could not but keep remembering her words when Duryodhana had come asking for her blessings before the war. She had replied, यतो धर्मस्ततो जयः – “Where there is dharma, victory exists there” [11.17]. But the sight of the carnage, of the pitiable lamentations of the widows, and the corpses of her dead sons caused her rage crest again, culminating in the most fearsome of curses, directed at none other than Krishna.

How did Krishna react? Should he have asked Gandhari for forgiveness? Should he have diverted blame on her? He did neither. The queen’s curse could not be averted, and neither did Krishna want Gandhari to be blamed for the coming destruction of the entire race o the Yadavas. He responded thus to Gandhari:

“No one other than me can destroy the circle of the Vrishnis. O kshatriya lady! I know what has already been decided. You have acted in accordance with what has been ordained.” [11.25]

In other words, Gandhari was but a traveller on destiny’s road, pronouncing in advance the fate that lay ahead for the Yadavas. Gandhari’s words would not, could not, go in vain. They had not been in vain when she had blessed Duryodhana, ” यतो धर्मस्ततो जयः  “, and they would not go in vain when she cursed Krishna. Yet Krishna’s response reconciled both realities – of the inevitability of the destruction of the Yadavs with the inescapable reality of Gandhari’s curse.

Krishna had embarked on a journey to quell the tide of adharma that risen in Bharatvarsha. He had taken on Narakasura and got back mother Aditi’s earrings. He had got Bhima to challenge Jarasandha and render asunder the king who had been brought together by the demoness Jara. Sage Muchkunda had burned down Kalayavana, but not before the Yadavas had to abandon Mathura. The great war in Kurukshetra had seen the power and adharma of the Kuru put down over the course of those terrible eighteen days. The Vrishnis of Dwarka were the one great mahajanapada that remained unchallenged. With unbridled power lay the risk of adharma. Krishna was cognizant of the dangers. What he had envisaged was given the stamp of inevitability through Gandhari’s curse.

Gandhari did not mitigate or take back her curse. Nor did Krishna ask for it. The destruction of Dvarka was the final chapter in the Mahabharata that would be written thirty-six years later. The end of the Vrishnis at Prabhas, near Somnath, and the destruction of Dvarka is itself a study in the futility of fighting against the inevitable. Krishna had done all he could have to stave off war between the Kurus. Thirty-six years later, he would watch as the Vrishnis killed each other. But that is a tale for another time.

The Stri upa-parva, at hundred and sixty-eight shlokas, is one the shortest upa-parvas in the Mahabharata. It is part of the Stri Parva, the eleventh parva, which also is one of the shortest of the 18 major parvas in the epic. As the name suggests, the Stri upa-parva recounts the sorrow of the Kuru queens on seeing their dead warrior husbands on the battlefield of Kurukshetra, culminating in Gandhari cursing Krishna. My reference is Bibek Debroy’s English translation of the unabridged version of the Bhandarkar Oriental Research Institute’s Critical Edition of the Mahabharata. The chapter number indicates the chapter within the Shanti Parva, of which the Raja-dharma parva is a minor parva.