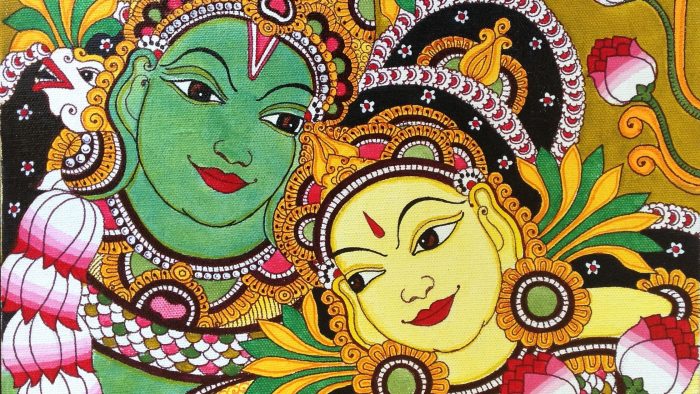 The Jagannath may be understood as Aprakrta Vastu- The spiritual substance. Comprehending Him through our tangible knowledge is an effort in vain. The corporeal senses and humanly knowledge is restricted to understanding the vastly intricate spiritual messaging of the Divine activities that have His participation. The Ratha Yatra conveys the climax of Manaviya Leela- human-like activities, which God is performing. By human perception, all this might look normal but in true terms, it is remote to the understanding of material intelligence.

The above lines express the reason for God’s humanly activities. It means that when the Lord assumes a humanlike body to show mercy to His devotees, He engages in such pastimes as will attract those who hear about them to become dedicated to Him.
Jagannath represents Vishnu who is also Shri Krishna. The Srimandira is regarded to be a representation of ‘Dwaraka’, the Sri Gundicha temple represents ‘Vrindavan’. Jagannath’s visit to His birthplace, the Janma Vedi which is also a  representation of his returning back to His childhood days spent as Krishna in Vrindavan. The weeklong stay of Shri Jagannath and His siblings at the Gundicha temple is an escape from the monotonous year-long stay at Srimandira to the bliss of Gupta Vrindavan-Gundicha.

An important event at the Gundicha Temple during the Ratha Yatra is on the Panchami – fifth day popularly known as Hera Panchami. Hera means to see. History has it that this ceremony was initially performed as per Vedic rituals with the utterance of shlokas and mantras from the Vedas. During the reign of Gajapati  Kapilendra Deb, the transformation of the ceremony happened making it more realistic. He introduced a gold idol of Mahalakshmi and made the makeover of this Divine practice into a more humanly ritual. On this day Goddess Lakshmi leaves the Srimandira and comes to meet Shri Jagannath at the Gundicha retreat during the Sandhya Dhupa.
Legend has it that post His recovery from the illness after the fifteen-day Anasar period, Lord Jagannath tells his consort, Goddess Lakshmi, that He looks forward to a change of place and expresses His desire of visiting the Gundicha temple. Devi Lakshmi had seen Her husband recovering from the illness, she agreed to the proposal but suggested that He take someone along.

To which Jagannath conveyed that he would take along, Dau Baladev and sister Subhadra, as they too were ill and needed a change. Jagannatha takes Shri Balaram, Devi Subhadra, and Shri Sudarshana with Him to Gundicha so that Devi Laksmi stays calm at the Srimandira.
Upon arrival at the Gundicha temple, Jagannath seems to have forgotten that He has left His wife back at Srimandira. On departure from the Srimandira, He had promised Mahalakshmi that He would be back after a day but strangely He had been absent from His temple since the day of Ratha Yatra for almost five days. 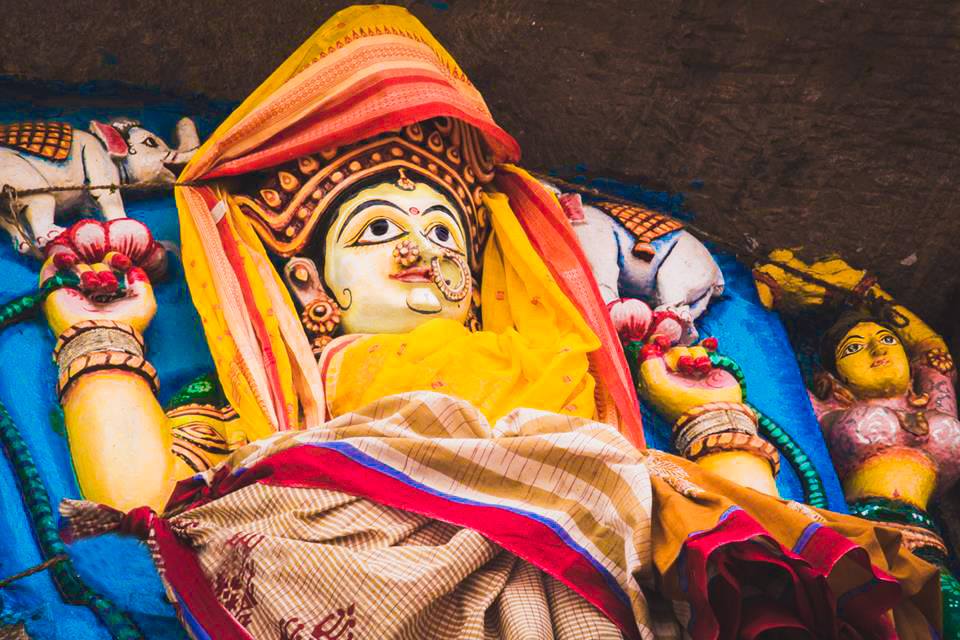 Her departure from the Gundicha temple Goddess Lakshmi is frustrated with Lord Jagannath’s casual behavior. After Shri Jagannath gives Her the consent garland, she is given a hasty send-off and the doors of the Gundicha temples are closed hastily. This indifferent behavior adds fuel to Her fury. 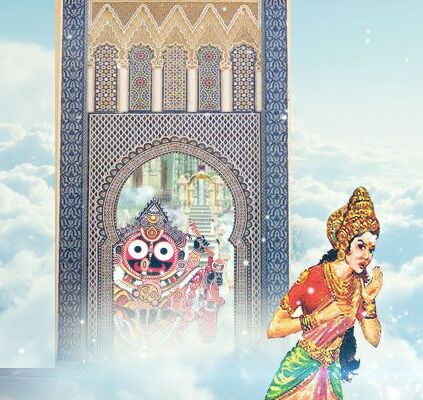 To vent out Her aggravation of separation and neglect, She orders Her attendants to damage a portion of Lord Jagannath’s Chariot – Nandighosa. This custom of chariot breaking is called the Ratha Bhanga. Throughout the mischievous chariot breaking endeavor, Goddess Lakshmi veils herself behind a tamarind tree outside the Gundicha temple. In hiding, She watches her attendants break the Chariot. Thereafter instead of making her way back through the Bada Danda, the main road to return to the temple, She escapes secretly through an exclusive corridor known as Heragohari Sahi Lane.

Dakshina Moda- the Southward Turning ceremony of the chariots occurs on the sixth day, a day after Hera Panchami. Lakshmi’s anger is sensed by the Lord Jagannath and the exit proceedings of the Triad are initiated from the Gundicha temple. The chariots that were parked facing the Gundicha temple are pulled to face towards the Srimandira and taken on to the south side. All the three chariots are stationed near the eastern gate, the Nakachana Dwara. It is through this gate the Gods will ascend on to their Chariots and then leave the Gundicha temple during the Bahuda Yatra- Return Car festival.

The Dakshina Moda ceremony also initiates the Rasa Lila of Lord Jagannath that continues for three days at the Gupta Vrindavan- Gundicha. During Lord Jagannath’s stopover at the Gundicha, the Vaishnavas consider the Gundicha temple as Vrindavan. All through the fifteen-day Anabasara of Shri Jagannath,  Shri Hari is engaged in the Madhura Rasa krida. These fifteen days of seclusion is the intimate time He spends with his wives-Bhu Devi and Sri Devi, showering His love on His beloved consorts, in Swakriya-Rasa. This aspect of Swakriya-Rasa speaks about the conjugal relationship of Shri Jagannath with his wives as followed by Shri Krishna with His married queens in Dwarka. Post the fifteen-day privacy phase with Goddess Lakshmi and Saraswati, Shri Jagannath desires an engagement in the Parakiya- Rasa with Shri Radha and the Gopis of Vrindavan. Lord Jagannath is aware that Shri Radha and Shri Lakshmi can never exist together while both are the same.  Both symbolize love and dedication to that one Lord, so His actual intent of Raas Leela remains disguised, while His love for both remains the same. 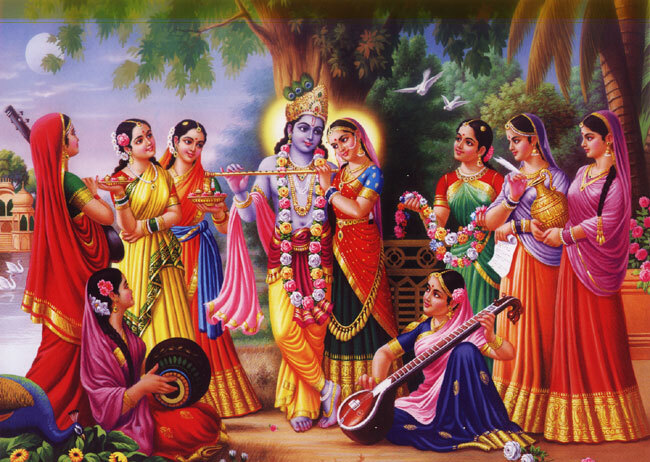 The above lines aptly convey the Divine concept of Madhura Rasa. It conveys that in the spiritual world, all the female lovers are the Goddesses of fortune and the male lover is the supreme personality.
As per the Puranas, Krishna married eight beautiful princesses and thereafter around 16,100 more. He had many children but His love for Radha and the Gopis could never be replaced. His heart always remained at Vrindavan. Vrindavan felt the absence of Shri Krishna who left Mathura when he was too young. Subsequently from Mathura, He established His new kingdom at Dwaraka. He never came back to stay at Vrindavan. Entire Vrindavan was heartbroken over His absence and He too missed them. It is believed that during the Ratha Yatra He leaves his seat at Dwaraka and proceeds to Vrindavan.
Post settling down at Gundicha temple, Shri Jagannath looks forward to dedicating time towards his favorite pastime – Raas Leela in the gardens of Shri Gundicha that has olive covers of Coconut, Mango, Neem and Bilva trees, clustered with Lord Jagannath’s favorite Vrinda bushes and fragrant Jasmine flowers. Amidst the hymns from Jayadev’s Gitagovinda, Lord Jagannath is engrossed in Rasa-Leela at the Gupta Vrindavan and in spreading the message of connecting with each other through spiritual love and affection. 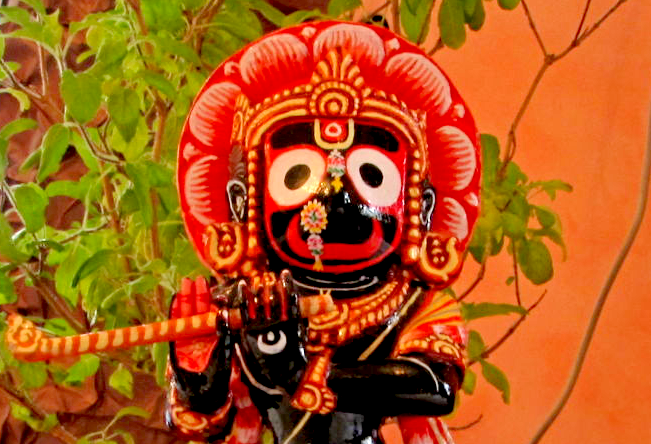 The above lines convey that, if a self-controlled person listens with faith to the confidential pastimes of Sri Krishna with the cow maids of Vraja, from the mouth of Sri Guru and glorifies it at every second, then he immediately obtains transcendental devotion towards the Supreme Lord and becomes capable of distancing himself from the heart disease of lust without delay.
Sri Hari is Leela-Purusottama, the superlative Divine of all Humanly Leela. He signifies the amalgamation of all the souls in spiritual love, enabling all humans to achieve triumph over worldly desire. The Leelas of Shri Jagannath initiates the progression of the Divine towards His devotees, who are searching the infinite but are still unable to recognize Him in all that exists around them. The most supreme achievement of devotion is to transcend into the spiritual sphere and then remain there and continue thereafter as Jitendriya- the conqueror of all his senses.

Note: This year the annual Jagannath Ratha Yatra was on 23rd June 2020. Hera Panchmi falls on 27th June 2020, and Dakhina Modo on 28th June 2020. Due to the COVID-19 pandemic, the rituals will be conducted, as per the orders of the Honourable Supreme Court of India. All the rituals associated with Ratha Yatra will be conducted only in the Moola Peeta of Shri Jagannath at Puri Dham without the participation of devotees.