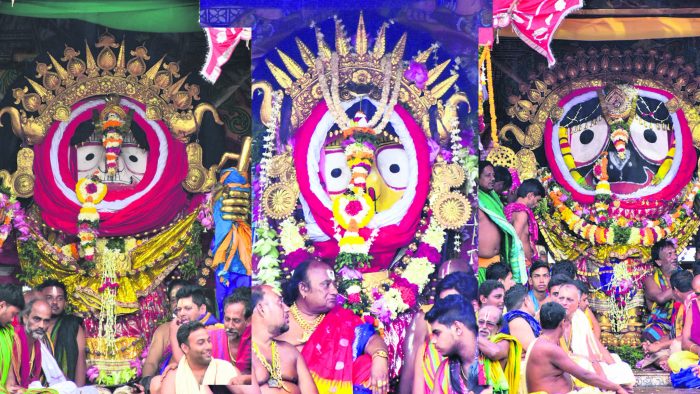 The Jagannath is Daru Brahma – The Divine Brahma in wood. The wooden images of Lord Balabhadra, Devi Subhadra and Lord Jagannath along with Sudarshana are unique to the Srimandira at the Moolah Peeth –Puri. The Triad is carved beyond the recommendations of traditional Shilpa Shastra. Jagannath and His siblings are abstract and shapeless structures, distinctly exclusive to any other Divine idols existing in the descriptions of Sanatan Dharma. His shapeless incompleteness makes him the absolute infinite of cosmic vigor, the Lord of the Universe.
Adi Shankaracharya in His dedication to Lord Jagannath writes

In the above lines Adi Shankaracharya conveys – I meditate on Sri Jagannatha, the Supreme Brahman has condensed to create whose Divine form, in which the eyes are like the petals of a fully-bloomed Lotus; who resides in the Nilachala Parvata in this World, but whose feet are placed on the head of Ananta- Shesha Naga who is in the World of transcendence.

Legend has it that the idols were made by Viswakarma who wished to remain undisturbed behind closed doors when he was engaged in the idol carving of the Gods. But due to Queen Gundicha’s inquisitive, the doors on the Maha Vedi were opened. Upon the untimely opening of the doors, Viswakarma vanished without completing the idols, leaving them incomplete. All the idols were left unstructured, without a proper nose, ears, hands, and legs. His incompleteness makes him the absolute infinite of cosmic vigor.

The Deities return from the Gundicha Mandir and remain on their chariots for the concluding ceremonies before they return to the Ratna Singhasana inside the Srimandira. Post His return from Gundicha on Ashada Shukla  Ekadashi, Shri Jagannath along with His siblings adorn the Raja Rajeswara attire, decked with heaps of gold. Suna can be translated to Gold. The incomplete idols of the Triad are given a gold makeover in the Suna Besha also known as the Raja Rajeswara Besha. Shri Jagannath undertakes the Ratha Yatra and the Bahuda Yatra in the Bamana Besha.

During the Shri Gundicha Ratha Yatra, He will appear in Bamana Vesha.

During the Suna Besha Lord Jagannath and Lord Balabhada appear with hands and feet made of gold. The Triad’s look is completed by the addition of limbs crafted in pure gold. The Trinity is decorated with golden ornaments and wear gold crowns. As per the temple records, the Suna Besha was first conducted in 1460 A.D. During this period Gajapati Kapilendradeva ruled Utkal. The Bada Tadua, advised King Kapilendradeva that the gold of Lord Jagannath should be displayed publicly, subsequently the same was done and the Suna Besha also came to be known as the Bada Tadau Besha. 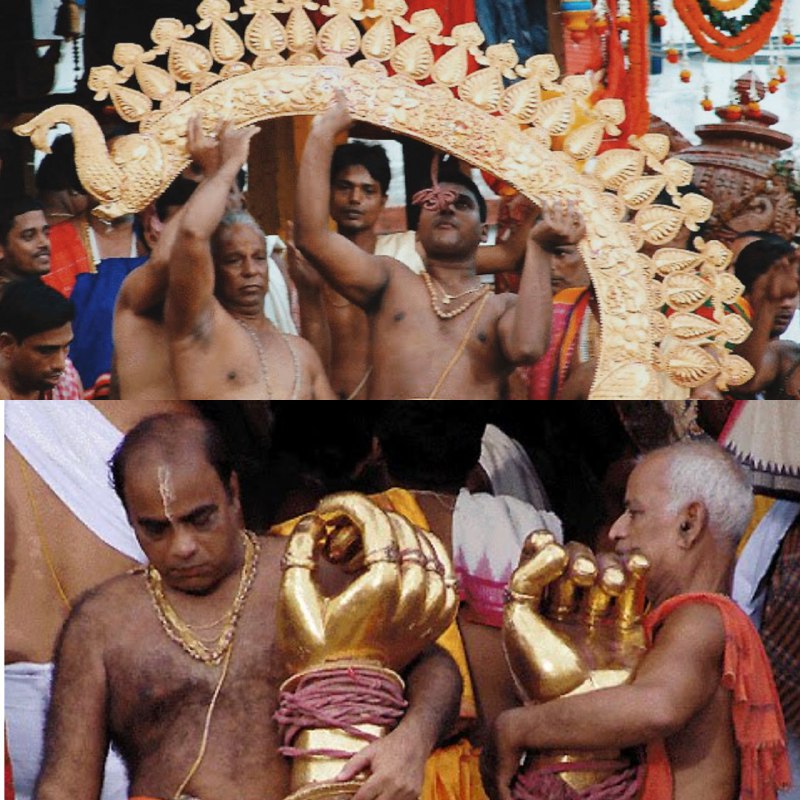 As per historic records when Gajapati  Kapilendradeva, who ruled between 1434-1466 AD  returned home victorious after defeating the Deccan rulers, he also brought along with him elephant loads of precious gems and gold. On arrival at Puri, he donated all the valuables to Lord Jagannath and dedicated himself as the Rauta- Servitor of the Lord.  Subsequently, he ordered that all the gold, silver, and gems in the Gods treasury be crafted into ornaments. These ornaments were then used to decorate the Triad.

On Ashada Ekadashi, the Triad is offered a special bhogo on the chariot known as the Chuda Ghasa, a sweet dish made of flattening rice and grated coconut. Thereafter in the evening around 4 PM, the Triad is ready to adorn the gold ornaments and give a public audience. The gold ornaments are stored at the temple’s treasury in the Bhitara Bhandara Ghara of the Srimandira. In the presence of the temple administration representatives and armed police escorts, around twenty-five Bhandara Mekap seyayatas who are in charge of the store, bring the required gold ornaments onto the chariots.

During the occasion of Suna Besha, the Deities are embellished with around 200 Kilograms of gold. In the olden days during the reign of Kapilendradeva, the Deities wore nearly 138 designs of gold ornaments. But these days, the Deities are decorated with only twenty to thirty types of designs.

5. Suna Chulapati – A Golden Ornament Worn Traditionally On The Forehead

7. Suna Rahurekha – A Half Square Shaped Golden Aura Around The Deities

8. Suna Mala – Necklaces With Several Designs Made Of Gold. These include:

On the 12th day of Asadha Shukla Paksha, the Adhara Pona ritual is conducted on all the three Rathas. Faith has it that during the entire period of Ratha festivity along with the Triad, thirty crore Devas and Devis also travel on the Rathas of Jagannath and His siblings. All these Gods, Goddesses, and Demi-Gods are also known as ‘Rath Rakhyak’ and guard the Taladwaja, Darpadalana, and Nandighosa throughout the Ratha Yatra. The Adhara Pona ritual is the ceremony of offering gratitude and liberating these Demi-Gods, Yakshas, Yakshinis, Yoginis, Pichasa, etc.  Adhara means Lips and Pona is the slushy fruit and cream drink that is offered. The Adhara Pana is offered after the Madhyahna Dhupa past the afternoon food offering.

Hollow cylindrical earthen tumblers are placed in front of the Triad. Each tumbler is tall enough to touch the lips of Shri Balabhadra, Devi Subhadra, and Shri Jagannath. On each Ratha, three such pitchers are placed. These pitchers are filled with around 100 liters of a thick sherbet prepared by combining milk, cream, cheese, jaggery, banana, camphor, nutmeg, crushed ginger, black pepper, and other spices. Post the offering procedure is completed, these earthen tumblers are broken to set free the Gods, Goddesses, Demi-gods, and spirits, and other invisible beings residing in the chariots.

The Adara Pana is only meant for the Demi-Gods, Goddesses, and Spirits. Devotees are prohibited from par-taking the same.

Jagannath Sanskruti depicts an awe-inspiring fusion of rituals that are not mere ceremonies and fabricated expositions but Divine ciphers of metaphysical energy expressed in the religious scriptures of the Sanantan Dharma.

Note: This year the annual Jagannath Ratha Yatra was held on 23rd June 2020. Bahuda Yatra got over 1st July 2020. The Suna Besa of the Triad is on 2nd July 2020 followed by the Adara Pana ritual on 3rd July 2020. Due to the COVID-19 pandemic, the rituals will be conducted, as per the orders of the Honourable Supreme Court of India. All the rituals associated with Bahuda Yatra will be conducted only in the Moola Peeta of Shri Jagannath at Puri Dham without the participation of devotees.