Gods of Healing in Hinduism 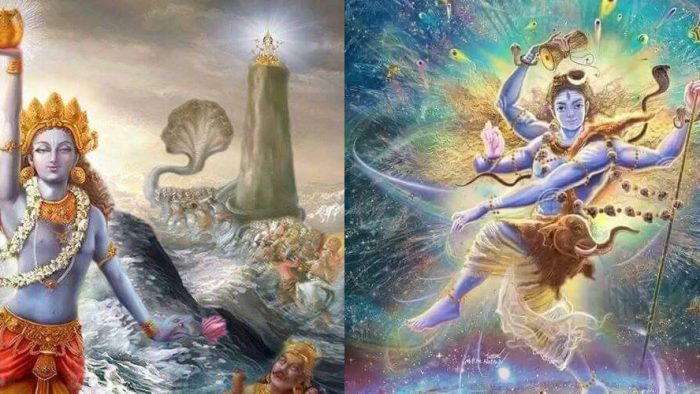 The faith of the human in the Divine is a trust that evolves when the urge for surrender is inevitable and when the reasoning to justify an occurrence fails. This surrender spurts,  flows and then continues incessantly as a devotion to the unknown cosmic power. Hinduism like other ancient Faiths of the world has many Gods assigned to look after the health and well being of humankind but in our pluralistic-religious world the accomplishment of bliss, health and well-being must transcend the boundaries of individual religions. Health and happiness is beyond religious limitations. The Gods we pray to in any form or in any religion are mere means to gather the prayers and funnel it for universal good. The goal is to liberate consciousness and elevate humanity.

In many ancient religious cultures and scriptures of the world, deities are dedicated to health and well being of the living kind. In Greek mythology Apollo is regarded as the God of medicine and healing. Airmed, in Irish mythology is known for her proficiency in therapeutic healing of patients wounded in battles. She is also known as the keeper of Irish herbal healing. Heka is an ancient Egyptian God associated with health and wellness. The Japanese pray to Shinto as the deity for good health. As per Chinese Feng Shui the three old men- Fuk, Luk and Sao, together are traditional Chinese deities, regarded as spirits of health, wealth and longevity.

In Hinduism there exist Gods with dedicated authority over diseases and healing powers. Many of these Gods have universal acceptance in Hinduism while some are region specific, having gained recognition locally. Some of these divine Physicians have been discussed here. The Hindu scripture – The Atharvaveda, is regarded as an ancient encyclopedia for medicine and a text on the science of mortal existence. It gives an insight regarding ancient Vedic medical science and its procedures that existed in ancient India. Many procedures pertaining to medicine have been discussed in here. TheAtharvaveda has around one hundred and fifty three hymns dedicated to health and healing and two hundred and fifteen hymns devoted to physiology. It also discusses the various natural sources and resources available, their remedial and psychosomatic powers.

Ayurveda, the earliest Vedic science of life is an Upaveda meaning a supplementary Veda in the Atharvaveda. Ayurveda is a dedicated text on ancient Indian herbal healing techniques and formulas. Scriptures reveal that Brahma –The Creator, furnished the therapies of Ayurveda. He then passed this knowledge to his son, Daksha Prajapati. Daksha further passed it down to the twin Vedic Gods Ashwin Kumars.

Before introducing the Ashwin Kumars it is important to gather knowledge about Sun, the universal healer. Sun or Surya is their father and a huge quantum of healing powers he possesses. The Vedas describe the Sun as the “Giver of life”. A fusion of water, turmeric, rice grains, jaggery, sindoor and flower petals are offered to Sun in a copper urn post bath by uttering the mantra mentioned below brings mental and physical wellbeing.
ऊँ घ्रिनि सुर्याये नमह्।
“OM GHRINI SURYA NAMAHA”

Offering water with arghya on a daily basis , facing the morning Sun is considered as an important ritual for maintaining a good heart, balanced mind, eyes, bones, skin and overall good health.

The Surya Namaskar,  a salutation to the Sun God activates and benefits every body part when it is performed. The Atharvaveda gives reference to around twenty two diseases that can be cured by the curative capacity of the sun rays. The sun is immense and so its healing benefits.

Dhanvantari, an incarnation of Lord Vishnu is worshiped as the lord of Medicine. As per legends, the Devatas urged Vishnu from the Asuras and asked him to grant them the boon of immortality. Vishnu suggested that they churn the ocean and in the process they could get many things that would help them escape the wrath of the demons and also achieve the key to immortality. The Samudra Manthan was organized and the ocean was churned by the Devatas and the Asuras . Many valuable things were gathered in the process. Airavat the elephant, The Apsaras, the Gandharvas, the Parijat flower , the Kalpavriksha, Kamadhenu the Divine cow , Goddess Lakshmi and finally towards the end Dhanvantari emerged out of the Samudra Manthan. Dhanvantari stood with a pitcher of elixir (amruta) the nectar of immortality. Post the distribution of the immortality nectar, Vishnu blessed Dhanvantari to be born as the God incarnate of medicine and nurture Ayurveda for the assistance of humankind. Dhanvantari is considered responsible for curing diseases, steady healing, ceasing fear and curtailing death. He is also known to be the father of medicinal plants.

Vaidyanath is Shiva incarnate. The Sanskrit word ‘Vaidya’ means physician ‘Nath’ means Lord, so Vaidyanath may be translated to the ‘Lord of Physicians’. It is believed that the Maha Pundit, and the king of Lankapuri , and the most ardent devotee of Lord Shiva,  Ravana prayed to Lord Shiva and earned many boons from him. He became very powerful with these boons and started misusing them to the extent that he abducted Sita . The heinous acts of Sita’s abduction lead him to a war with Lord Ram. Ravana lost the battle with Lord Ram. Ravana was severely injured in the battle and was treated by Shiva as Vaidyanath. According to another legend, it is believed that while offering his penance to Lord Shiva, to earn boons, Ravana offered his ten heads to Lord Shiva one by one. Impressed by this inimitable offering of  Ravana, Lord Shiva restored all the ten heads of Ravana by playing the role of a Vaidya or physician and then blessed him with power and immortality. Thus Shiva was called Vaidyanath. Lord Vaidanath is prayed as a healer and curative incarnation of Lord Shiva.

In Hindu scriptures Lord Shiva is an Adi Yogi and a Maha Yogi- The founder and first practitioner of Yoga. Another name of Lord Shiva is Yogeshwara- The ‘Eshwara of Yoga’. As Yogeshwara, Shiva personifies the practice of Yoga that deals with the well-being and vigour of body, mind and consciousness. Yoga brings together the cosmic energy and regulates it to attain the loftiness of spiritual strength that can be attained through the fitness of body and mind.
Shiva is a symbol of eternal life. He is also treated as the lord of meditation, having the power of dissolving the entire universe into him. Goddess Parvati is considered to be the first yoga disciple of Lord Shiva. Upon his marriage with Parvati, he shared the secrets of Yoga with her by teaching her 84 yogic asanas or postures. These 84 asana could eradicate all the ill effects in a person’s life and yield auspicious results. These asanas were considered as Raja Yoga and had the capacity of making a person healthy and successful.

Siva and Parvati kept these Yogic postures a secret. Parvati wished to share the curative postures with the world as a beneficial therapy but Lord Shiva was not very keen.  After much persuasion Lord Shiva agreed to share the secrets of Yoga with mortals . Lord Shiva taught the Sapta Rishis the art and science of Yoga of on the banks of Kanti Sarovar, near Kedarnath on the night of Shivaratri. To sum it all Shiva is the ‘God of Yoga’.

An incarnation of Adi-Shakti Goddess Durga, Shitala Mata is worshiped as the Goddess with curative powers who has the ability to cure viral diseases like chickenpox, smallpox, flue, measles, sores, ghouls , cholera, dysentery etc. In Sanskrit Shitala translates to “One who cools”. Goddess Shitala carries a pitcher of medicinal cold water to relieve the suffering population and to cure them from ailments.

As per legend, there was once an Asura named Jwarasur. He was named Jwarasur because he is the demon of jwara or fever. He rampantly spread incurable fever to children , adults and old  sparing none from his feverish wrath. There was no prevention or cure found for such fever. Lord Shiva and Parvati decide to draw an end to the pandemic he caused. Parvati decides that the power of her coolness will bring relief to the suffering of humankind. Shiva transforms himself into Bhairav and reaches the battlefield where he confronts Jwarasur and tries to stop him from causing the spread of the epidemic. Both Bhairava and Jwarasur indulge in combat. Goddess Shitala appears on the battlefield and infects Jwarasura with brutal life taking viruses causing several diseases to him. Jwarasura succumbs to diseases and humankind is free from his disease causing wrath.

This form of curative Adi shakti is worshiped across India by different names and in different forms. In Northern India she is Shitala Mata; in South India she is worshiped as Mariamman. In Orissa as Thakurani and Mangala and Oladevi in West Bengal, Oridevi in Marwar region of Rajasthan. She is known as Katyayini and Bhagawati in several parts of east India. She is also known as Pranasavari in Buddhist and Hindu scriptures.

The present Pandemic times with the Covid -19 scare hovering all over mankind, it is conviction and optimism that remains the guiding force to usher in every new day into our lives. The most powerful countries of the world have been silenced by the merciless slaughter of the Corona pandemic and continue counting on the rising numbers of casualties. While the doctors and scientists look for a solution, humankind looks loyally towards the unknown power with a prayer on its lips. Today time become the most commanding element in life and the human species is learning its lessons to shun its alter ego and humbly nurture patience and perseverance.  The world that was once divided on the basis of economic and military strength has moved in closer to save its populace from a mysterious foe. Until the preventive or the curative antidote is released the only hope lies in the Divine. Till then the mantra to validate faith in one’s own self through the Divine should be –

“अहम ऑरोग्यम्”
“Aham Aarogyam”
That translates to “I am healthy”.