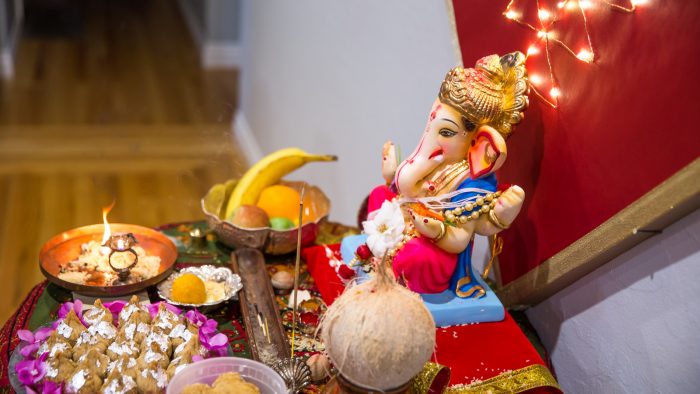 The Elephant God, Shri Ganesha is the most adorable and famed Hindu Divine. Popular as Vignavinashaka– The remover of sorrows and as a cause for happiness and prosperity, Shri Ganesha marks the beginning of all auspicious events in the Hindu household. Every year Vinayaka Chaturdashi celebrations begin in the Hindu lunar month of Bhadrabha, on Chaturthi -fourth day of the waxing moon period or Shukla Chaturthi and continue till the 14th day of the waxing moon period.

It is believed that Shri Ganesha was born on this day. The fourteenth and the conclusive day is celebrated as Anant Chaturdashi when Shri Ganesha is bid adieu by his devotees, longing for welcoming him the next year to remove their difficulties and distress.

The Puja offered to Shri Ganesha on Chaturthi, glorifies the dedication of devotees- physically, mentally, and spiritually, incompleteness with all the twenty-one tatvas or elements that make the body in the offering. The Shri Ganesha is an eco-friendly God who can be moulded in clay, created from moist turmeric powder. Shri Ganesha can also be prayed by converting a banana plant into the representative image of God. He is also represented by the Purna Kumbha.

Every Hindu festival celebrates a Deity and also a set of dedicated offerings that are specific to the festive celebration. The offerings to Vinayaka include the Pancha Bhutas – the five physical elements Sky, Air, Fire, Water, and Earth; Pancha Jnanendriyas -Ears, Skin, Eyes, Tongue, and Nose; the Pancha Tanmatras -Speech, Touch, Sight, Taste, And Smell; Pancha Karmendriyas – Feet, Hands, Mouth, Rectum and Genitals and also the Mind.

One of the most important rituals in Hinduism is related to the offerings made to the Divine by the devotees. This offering of the tangible and the intangible, edibles and water, leaves, and flowers form a necessary part for the successful completion of the puja.

The elephant-headed God has a magnanimous appetite for greens and also for human cooked delicacies the food offered to the Deity is then partaken by all who are a part of the puja and is known as Prasad –the Grace of God. Ganesh Chaturthi comes with a host of special gastronomy, the patter is huge and the list of food items is endless. 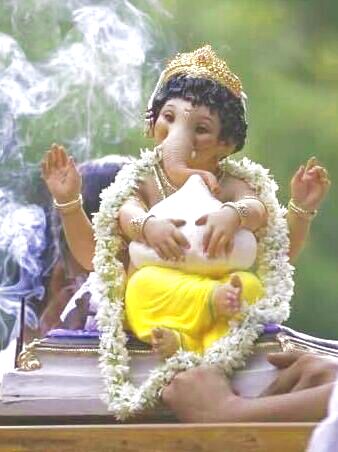 A loved sweet of Shri Ganesha is the Modak which makes him popular by the name Modakpriya. The lines below suggest the importance of Modak for Shri Ganesha.

Meaning – He who has a mouse as a mount, Who carries a modak on his palm, Who has fan-like ears, long pendulous thread, short dwarf stature, son of Maheshwara (Shiva) and Who removes all obstacles of one and all, I prostrate at your feet O Lord.

Modak , the drop shaped rice dumplings stuffed with a sweet filling of coconut scraping and jaggery is must on the naivedyam list. As per legend, when a visitor came to Kailash Parvat, Devi Parvati asked both her sons – Kartik and Ganesh to offer some Modak to the visitor, but none of them shared their Modak. Seeing their craving for the sweet dumpling , Devi Parvati decided to test both her sons – Ganesha and Kartik and both were asked to complete three circles of the galaxy to claim the sweet.

Kartik sat on his peacock and set off to circle the world. Shri Ganesha was intelligent, he took three rounds around his parents, Lord Shiva and Devi Parvati expressing that they were the world to him. Moved by Ganesha’s act, Devi Parvati gave the Modak to Lord Ganesha.

Another legend that needs a mention is the legend of Shri Ganesha humbling the arrogance of Kubera, when he failed to satisfy the appetite of Shri Ganesha. As per legend , Lord Kuber , the God of wealth and the treasurer of Gods built a house of Gold where everything from the walls , to floor, to the ceiling , the tapestry , furniture , utensils , all was casted in the shine of gold.

Kuber was swelling with pride and was eager to show off his opulence to other Gods. He organized a house-warming party. His guest list included all the Gods and also lord Shiva whom he personally went to invite.

Kuber accepted the offer and Shri Ganesha was delighted to accompany Kuber to his house of gold. Kuber, upon reaching his palace of gold started giving Shri Ganesha a tour of his precious house. However, Shri Ganesha was not much keen on these valuables but was looking forward to the variety of food he would relish at Kuber’s rich palace.

Shri Ganesha was finally served food. Kuber ordered for a lavish spread, thinking that Shri Ganesha would not be able to consume even one spoon of each item as there was too much food. Shri Ganesha had a huge appetite and Kuber was ignorant. Shri Ganesha loved the sight and whiff of the food. He started relishing each dish one after the other.

Soon Shri Ganesha had finished each and every dish that was cooked. But his hunger could not be satisfied. More food was ordered to be cooked. But Shri Ganesha was very hungry and he could not wait so he entered the kitchen and started eating raw stock. Kuber was shocked. He wanted to stop Shri Ganesha, but there was nothing he could do.

When the raw food got over, Shri Ganesha started eating the gold utensils. Kuber was shocked! He rushed to Shiva in order to report about Shri Ganesha’s activities. Shiva smiled. Kuber had understood his fault and consumed his pride for good. Kuber apologized for his arrogance. Shiva then gave him a ladoo made by Devi Parvati and asked him to serve it to Shri Ganesha.

Another variation to the above legend has it that Shiva gave a handful of puffed and beaten rice and asked Kuber to share it with Shri Ganesha and that would satiate him. Kuber returned to his mansion and served Shri Ganesha with the food items given by Shiva. Shri Ganesha ate the items and seemed satiated and happy. Kuber was relieved and had learned his lesson. 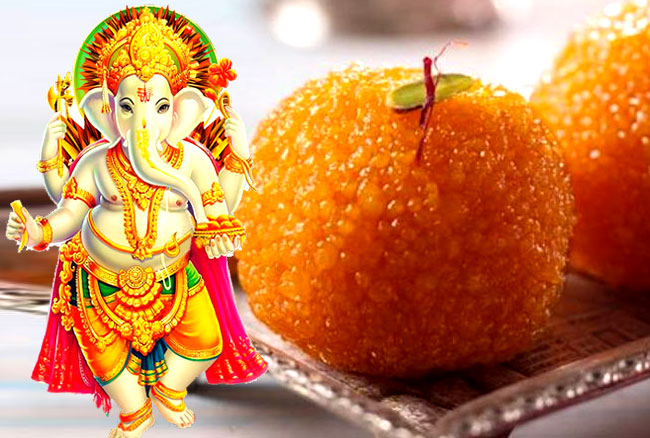 These ladoos are commonly offered across India to Shri Ganapati during the ten-day festivity. Puffed rice is also offered to the Lord. In Orissa beaten moist beaten rice (chwida), scrapped coconut, jaggery and ghee are mixed together and offered as Chuda Ghasa on Shri Ganesh Chaturthi.

In Maharashtra sweet and flatbread known as Satori is prepared using Khoya, milk, Ghee, and Besan is specifically prepared during Ganesh Chaturti. Another auspicious offering is Puran Poli, a flatbread rolled out of wheat dough and stuffed with a sweet filling of lentil, coconut, and jaggery. Puran Poli is popular in Gujarat and across South India as an offering to Ganapathy.

Kudumulu or undrallu are Andhra style steamed rice balls made in both savory and sweet variations. Made with a mixture of rice Rava or broken rice, chana dal, ghee these are offered as naivedyam to Lord Ganesha on Vinayaka Chaturthi. 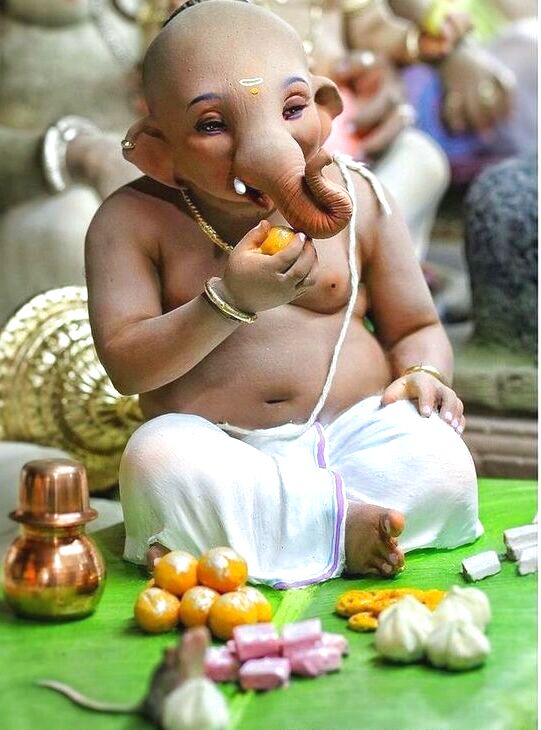 Shri Ganesha also has a set of favorite fruits that he relishes along with the sweets and savory offered. Coconut, banana, jack fruit, pomegranate, sugarcane, mangoes, pineapple, wood apple, and elephant apple are some fruits that are traditionally offered on Ganesh Chaturthi to the Vinayaka.

Every region and household has its own special delicacy for Shri Ganesha but some prominent ones are the crowd pullers and common throughout. Shri Ganesha being a foodie welcomes all that is offered with sanctity and devotion. The platter of Ganesha unifies the Hindus through the thread of faith and the flavors of pious food gastronomic fare.