Enriching the Tradition… the “Ramanujan” Way! 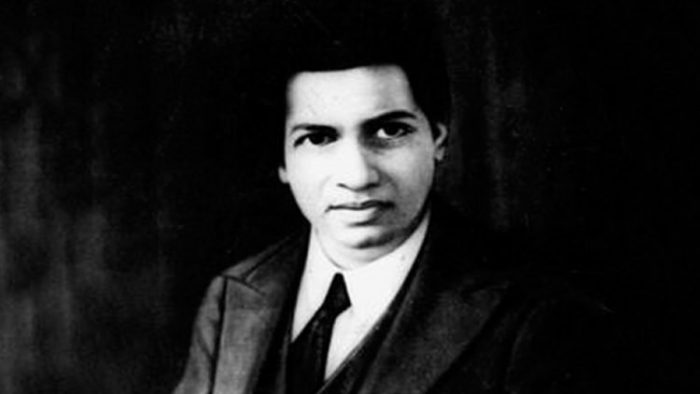 It was somewhere around 1912-1913, more than hundred years back from now, when Prof. G. H. Hardy, one of the most popular and prolific mathematicians of that time, had received a letter. It was from India, far away from Great Britain! Hardy must have had tough time in pronouncing the name of the sender. The sender had requested Hardy to go through his mathematical work. When people get name and fame in their field, they receive several such letters from various parts of the world, most of which are completely worthless! Hardy too was used to such letters and was in no mood to go through the, so called, ‘mathematical work’, of a poor person from a poor country.

To add to it, the sender had clearly stated that he had finished only matriculation, by then. However, something in the letter, may be the courteous and yet confident language of the sender stopped him from throwing the mail to dustbin, and during night time, he decided to go through it thoroughly. Ignoring the introductory lines, he went straight ahead to the accompanying mathematical results and within a few seconds, found himself sitting upright, completely focused on the contents, and having forgotten the surroundings!

He thought over it again and again. Some of the results, mentioned in the letter, seemed to be known to him, a few he could prove, but the remaining completely baffled him. It was hard, even for the stalwart like Hardy, to believe that such results could exist, and yet, it was almost clear that no non-mathematician could ever dream such results, let alone write! He realized that he was going through a monumental work in mathematics. He further realized that the sender of the letter, Mr. Shrinivasa Ramanujan, should be brought to England. And then, because of his incessant efforts, Ramanujan went to England and stayed there for almost six years. It was this stay that could bring his work in limelight. It was this stay that earned him the name, which he deserved. It was this stay that made the world come to know about this genius mathematician and his work!

A story of Hardy and Ramanujan is very popular. Once, Hardy came to meet Ramanujan by a cab. Being always curious, he read the number plate and was a bit unhappy after seeing that the number was 1729. He couldn’t think of any nice mathematical property of the number. Moreover, the number was divisible by 13! After some talk with Ramanujan, Hardy mentioned about 1729. However, the moment he said that there seemed to be no nice property associated with it, Ramanujan immediately responded, as if pleading the number, “Sir, it’s an interesting number, for it is the smallest one, which can be expressed as the sum of cubes of two positive integers, in two different manners: 123 + 13 and 103 + 93 ”. Hardy could hardly believe what he listened. A great number theorist, he was, and yet he wasn’t aware of such interesting property of 1729. It is said that, Hardy told this story to everyone whomsoever he met on his returning journey.

What makes Ramanujan special person? Of course, his immense affection towards the subject (mathematics) and almost complete ignorance towards anything else certainly marks him a devotee of the goddess, called mathematics. But more important was the fact that he was devoid of even the basic things that are needed to be a genius! He had absolutely no money to buy even the papers, forget about the books; and his total focus on mathematics made him a failure in the first year of college and thus he was devoid of the higher education also. What he learned was very less, and yet, what he created was stupendous!

The poverty that encircled him was so stern that he had to wander through the streets, in search of pieces of paper, to write something on. The citizens who used to throw paper wrappers carelessly, hither and tither, were actually providing him the required material. And even then his brain was so fast and generating newer and newer results, that even this wasn’t sufficient. So he had to use inks of different colour to write different results on the same paper. In fact, he could write only the results; writing the proofs was beyond the available raw material. Almost all the proofs were there in his brain, stored safely.

Ramanujan worked mainly in the areas like analysis, number theory, infinite series and continued fraction. He was so ahead of the time that he could provide solutions to many problems, which were regarded as unsolvable, then. His independent contribution to the field of mathematics is enormous. He could develop around as many as 4000 results. Ramanujan prime, Ramanujan theta function, mock theta function form some of his popular works. These have been instrumental in developing new areas of mathematics. After experiencing his extensive ability to work, hours after hours, and generating new results, every now and then, Hardy aptly remarked that he could be only compared with Euler!

Ramanujan’s work created not only a wave of happiness in the community of mathematicians, it also created a feeling of surprise and amazement amongst them. By the beginning of twentieth century, the whole world was under a belief, in fact a misbelief that it’s only Europe, which has “fertile” land and so only Europe can germinate brilliant brains! This belief was not only far from the truth, it was, in fact, a mendacity! It was India and Indians, who had given the great gift of decimal system to the entire world. When the so called ‘fertile’ Europe was struggling in carrying out simple multiplication, because of the unwieldy system of the Roman numerals, the Indians had gone far ahead in all sorts of computations! It’s interesting to note that we had coined terms for the numbers from 101 to about 1050 !!

It’s because of the merchants, who used to trade with Indians as well as with the westerns, that the Europe understood the decimal system, and thanks to heaven, that they realized the importance of the same. The merchants (mainly Arabians) used to travel from western countries to Asian countries. At every place, they had to do lot of calculations, almost everything in mind. They were the first from outside India, who realized the power of decimal system. They then made it popular all over the world. It’s sad that the digits, like, 1, 2, 3, etc. are called Arabian numerals. They should be called Indian numerals, if not Hindu numerals.

The famous fact about any right angled triangle, that the sum of the squares of its two perpendicular sides equals the square of its hypotenuse, too was known to Indians. As we go through the scriptures, especially the ones, which describe the processes involved in sacrifices (Yajna), we realize this fact. And still, this is known only as Pythagoras theorem! To add some sorrows to this sad story, hardly any Indian feels sorry for this! It is said about Pythagoras that he had been to India, once upon a time. We have no intention to say that he just borrowed this theorem from us! He might have developed the same, on his own. But then, if he had been to India, he might have learned several other aspects of mathematics, which might have helped him develop this result!

Sir Isaac Newton is certainly a great name in the field of science and mathematics, because of his invaluable contribution to both these subjects! Calculus is a celebrated branch of mathematics and Newton enjoys the fame of being “the father” of Calculus, along with Leibnitz! Undoubtedly, the contribution of these two contemporary geniuses is praiseworthy!

However, is it really true that before these two, no one had any idea of the basics of Calculus? In India, there were several attempts to find the value of π. Mathematicians like Aryabhatta (5 th Century A.D.) has stated the value of π, correct up to 5 to 6 decimal places! This π fellow is very much essential in getting the area of a circle. The formula πr2 is certainly known to everyone! But note that, this formula is not just an accepted one, like area of rectangle! This means, by assuming that the area of a rectangle equals length multiplied by breadth, one can “prove” that the area of a circle is πr2. But to prove this, one needs integration. Integration depends upon the concept of limit, which is the basis of Calculus. So unless we had some idea of limit, how would we have thought of area of circle and why else would we have stumbled upon this celebrated π? Of course, these are surmises, but still, are worth pondering!

Another interesting story is about Madhava, a mathematician from South India, who died much before Newton was born! Any matriculate knows the basics of trigonometry and some particular values, like sin 30o = ½ and so on! It should be noted that by using the basic results in Pure Geometry, one can prove this! Let us not have a wrong feeling that by “measuring” the various lengths of sides of a right angled triangle, one may get all these values. In fact, the whole Geometry is far from measuring lengths and angles. It’s actually analysis that we do!

But then the next question that a curious mind would ask is, what is sin 29o? Of course, your calculator would give you approximate answer, but how does it know even the approximate answer? We have properties of 30-60-90 triangle; do we have properties of a 29-61-90 triangle? If not, how could we get sin 29o, or cos 61o, etc.? But using the techniques of Calculus, mathematicians have developed what they call “infinite series”, which can be employed to get answers to such questions to any desirable level of accuracy.

The series for the functions like sin, cos and many others are so bizarre, that it’s almost impossible for anyone to come up with these, just by chance, without using Calculus. And now here comes the most interesting and worth thinking part of the story. Madhava knew these series. He has explicitly mentioned these in his work. His methods might have been different, but unless the basics of Calculus were employed, how on earth, he (or any of his teachers) could write those series? What we have seen above are only some of the glimpses of the glorious past of Indian mathematicians.

We had a great tradition in the field of science and mathematics. Ramanujan was basically an adherent of these traditions; but through his indisputable intellect and exhaustive hard work he was able to enrich the same, considerably!!!