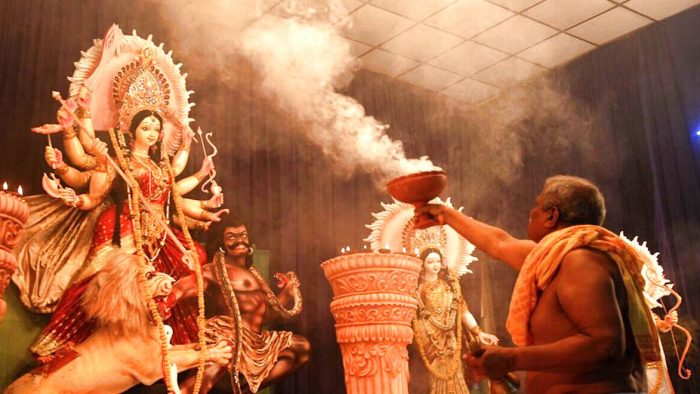 Shri Jagannath is ‘Mahayanic Shunya’ and the ‘Advaitic Brahma’. He is a process and a medium for many who worship him in various forms. At the Mula Peetha in Shri Jagannath Dham, Puri the presence of   Shri Jagannath as Shiva along with Goddess Bimala as Shakti validates one of the several manifestations of the Lord.

The presiding deity of the Puri Jagannath temple Shri Jagannath – The Lord of the Universe, is accompanied by the guardian deity, Chatur Bhuja – the four-armed Goddess, Adya Shakti- Ma  Bimala.

Meaning: In a place called Utlaka, there resides Vimala as Maha Devi and Jagannath as Bhairava.

Goddess Bimala is identified as the incarnation of Katyayani, Durga, Bhairavi, Bhuvaneshvari, and Ekanamsha in various texts and rituals.

As per the Devi Purana, it is believed that when Shiva performed the Tandva holding Sati’s corpse, a part of Sati’s body part fell at Srikshetra in Puri.

The divine spot where the Pada Khanda –the foot of Sati fell is where Goddess Bimala is enshrined within the Jagannath temple at Puri. As described in the Hindu Puranas, Devi Bimala temple is considered one of the Shakti Pithas.

Durga Puja celebration at the Shri Jagannath temple in Puri uniquely patronizes the worship of Durga-Madhava and is observed for a period of sixteen days. It is believed that the Durga-Madhava worship was initiated in the temple by the orders of Devi Subhadra, an incarnation of Shakti. Devi Subhadra is worshipped with the ekakshara mantra ‘Hrim’- ‘ह्रीं’.

The mantra is recited as

The above mantra validates that Devi Subhadra is also conceived as Goddess Bhubaneswari. Goddess Bimala is also worshipped with the same mantra as Devi Bhubaneswari.

The puja offered during these sixteen days is popularly known as Sohala Puja. Beginning from Ashwin Krishna Astami to Ashwin Shukla Navami it is also known as ‘Sakta Gundicha’ or ‘Saradiya Ratha Yatra’.

As per ritualistic practice, after receiving the consent of Devi Subhadra in the form of a flower garland on Ashwin Shukla Saptami, the proceedings for the Sahasra Kumbhabhishekam of Goddess Jayadurga begins.

On Ashwin Sukla Ashtami, the gold idol of Devi Jayadurga is placed on the Divine altar – Marjana Mandap. With the consent garland around her neck, Goddess Jayadurga is treated to pious ablution with thousand pots of sanctified water accompanied to the utterance of the Banadurga mantra.

Meaning:  After the completion of the puja rituals of Mahaprabhu on Saptami tithi, the idol of Jayadurga is taken to the sanctum sanctorum and placed in front of Devi Subhadra. After receiving a consent garland from Devi Subhadra, Goddess Jaya Durga is treated to an Abhishek with thousand pots of water.

Post the Sahasra Kumbh Abhisheka, the idol of Devi Durga is taken to the door-step of the Bhandara Ghara. Subsequently, the idol of Sri Madhava is brought from the Ratna Singhasana and He is placed by the side of Maa Durga on a Divine pedestal.

Madhava represents Purusha and Durga symbolizes Shakti, here the two deities join hands together and are known as Durga-Madhava. The idols of Durga and Madhava are taken inside the sanctum sanctorum.

After giving Darshan, Durga and Madhava are taken to the temple of Maa Bimala where they are offered oblation and   Bhog. The deities are then taken to a place in the Srimandira, known as Mahajana Bhandara.

This ritual is observed daily for a period of eight days in the first phase of Sohlo Puja, beginning from Krusna Ashtami in the month of Ashwin.

In the concluding eight days beginning from Sukla Pratipada to Ashtami, the idols of Durga and Madhava are taken together to the Narayan Temple in Dolamandapa Sahi and all the rituals as observed in Bimala Temple during the first eight days are replicated.

These rituals are observed on all eight days in the second phase of the Sohlo-Puja ritual.

After completion of the Sola Puja ritual, the Idols are finally taken to the Srimandira on the sixteenth day. On Vijaya Dashami, the last day the images of Durga and Madhava are taken around the temple premises of Shri Jagannath, along with various weapons.

Thereafter Devi Durga is placed in Bhandara Ghara and Sri Madhava takes his place on the Ratna Simhasana, to the left side of Sri Jagannath inside the sanctum sanctorum. The Durga-Madhava worship as observed in the Srimandira  is popular as Sakta Gundicha.

The Tantrik manifestation of Goddess Bimala is evident on the days of Saptami, Ashtami, and Navami in the month of Ashwin. It is believed that during the period the compassionate Bimala displays her destructive face.

During the entire period of the sixteen days, Goddess Bimala is attired in various Veshas of Shakti, displaying the specific incarnations and its mood. The Goddess is considered to be in her most aggressive and powerful form during the Durga Puja.

Meaning: In Odisha, Vimala is Parashakti and Pureshvari, the foundation of the entire creation of this universe, residing in the city of jewels. I offer my homage to You, Oh!! Goddess, together with Your Bhairava, Madhava. Please bless me.

The rituals performed during this period are secretly done by a select group of Sevayats. Ma Bimala assumes her aggressive facet. During the Durga Puja, women are restricted from entering the temple.

Bimalaparusa –  Bimala’s cuisine is offered to appease the Goddess. On  Saptami, Astami, and Navami, during the Durga puja, there is a deviation from vegetarian sattvic food offerings made to the goddess to Non-vegetarian food offerings.

Fish from Markandya Sarovara is made available and is cooked in a makeshift temporary kitchen as per rituals, at a designated place on one side of the Bimala temple. This cooked fish curry is offered as bhog to the Goddess Bimala in accordance with Tantric rituals. The Bimalaparusa is thereafter distributed selectively.

A he-goat is brought to be offered to the Goddess. The sacrifice is performed on the Bakula Pindi in the outer premises of the Bimala temple. During the sacrifice rituals and related puja proceedings at the Bimala temple, the doors of Jagannath’s sanctum sanctorum remain locked.

All these rituals of sacrificing, cooking, and offering Nonvegetarian food is performed after Shri Jagannath has been put to sleep at night. These rituals are completed before sunrise ensuring the premises are cleaned up so that Shri Jagannath’s doors can be opened for regular rituals of the Trinity.

Shri Jagannath is Vishnu for the Vaishnavas, Bhairava for the Saktas and Shaivas offers their respect to Him as Shiva. The Ganapatyas offer their devotion to Shri Jagannath as Ganesh. He is Buddha for the Vajrayana Buddhist.

The Puranas confirm the worship of Durga-Madhava and Goddess Bimala as antique and exclusive to the Srimandira.  The amalgamation of Sakta and Vaishnav worship during Durga Puja remains unique to Shri Jagannath Dham, without any replication across the country.

Note: This year the Durga Puja at Jagannath temple Puri is a 45-day affair instead of the usual 16 days. The extended Sohlo Puja period of 45 days started from September 9, 2020, and concludes on October 24, 2020. The extended period is due to Molo Maasa- leap month, which occurs twice in the month of Ashwin this time. As per tradition, no Puja is performed during the period.