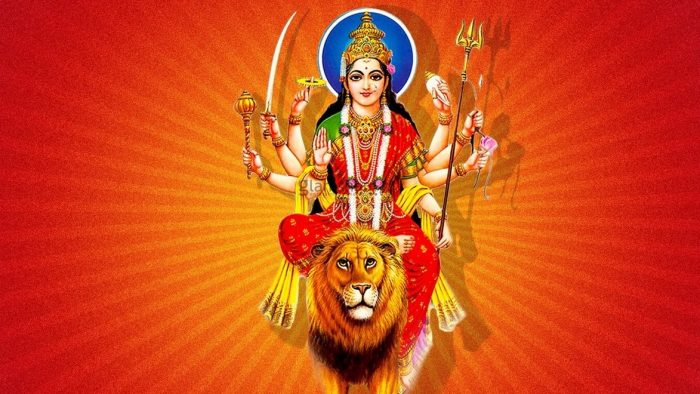 With Nishumbha killed, Shumbha taunted Durga that she had been able to fight as long as she had only with the help of many other gods and goddesses. The goddess responded that she was only one, all others were her own manifestations. All the other goddesses entered into her and only Ambika remained.

The battle began again between the goddess and Shumbha. Divine weapons were unleashed, by both Ambika and Shumbha the daitya. His weapons, however, were destroyed by Parameshvari with a mere humkara! The asura used arrows, swords, to attack.

All of them were, however, brought down by the goddess. She then destroyed his chariot, slew his horses and charioteer. Shumbha rushed at Chandika to bludgeon her with his bare fists, striking her chest with his fists.

The goddess, however, was unmoved and slapped the asura, who fell down. Rising again, he grabbed the goddess and rose up in the sky, where the battle between the two continued.

After a long battle in the skies, Ambika hurled the asura to the ground. Before he could get up to strike again, she pierced him with her trident, finally killing him.

With both Shumbha and Nishumbha dead, the gods, led by Indra and Agni, praised the goddess. This is known as Narayani-stuti. Specifically, 18 shlokas in this chapter are referred to as the Narayani-stotram.

Saluting her as Vishweshvari, Ishvari, Vaishnavi, the gods praised her as the mother of all gods, as one who removed all ills, who could not be conquered in valor, who should be praised, but for whom words were insufficient to praise.

The goddess obliged and asked the gods to ask for a boon. The gods wanted the goddess to vanquish their enemies.

Devi then said that when the twenty-eighth yuga (dvapara) of the Vaivasvata manvantara arrived, there would be two other great asuras – Shumbha and Nishumbha – would be born. She would be born through Yashoda’s womb and kill them. She would also destroy the danavs in Viprachitti’s lineage, and in that form would be known as Rakdadantika.

In summary, she assured the gods that whenever danavas caused trouble, she would arise to vanquish them.

Finally, the goddess describes the benefits of chanting this stuti, and says that this is a description of the destruction of the asuras Madhu and Kaitabha, Mahishasura, and Shumbha and Nishumbha. If recited according to proper rites, this mahatmya would remove all calamity and suffering.

This mahatmya, the goddess said, must be read with a controlled mind, listened to with devotion, and quell epidemics, evil portents, and three kinds of calamities (Adhyatmika, Adhidaivika, and Adhibhoutika).

If read properly at a place, the Devi would make that her abode. A man who listened to her account would be freed from fear, his lineage is satisfied, his enemies are vanquished. Children are freed from demons who may have seized them. Its reading assures the destruction of rakshasas, bhutas, and pishachas.

Rishi Sumedha concluded his account of the Devi Mahatmya, telling both king Suratha and the vaishya Sumadhi that the cause of their attachment and discontentment was on account of Mahamaya. He advised them to seek refuge in Parameshvari.

Both Suratha and Samadhi took leave of the sage and went on to worship the goddess. By the banks of a river, they fashioned an earthen image of the goddess and worshipped her.

Satisfied, Chandika manifested herself in front of them and offered them boons. The king asked that he get a kingdom that could not be vanquished in his next life, while the vaishya asked for the wisdom (gnana) to rid his mind of the sense of ‘me’ and ‘mine’ that afflicted him.

The goddess gave king Suratha the boon that he would not only regain his kingdom in a few days, but in the next life, he would be born as Savarnika to the god Vivasvat, and go on to become Savarni Manu. The vaishya would obtain the gnana he desired.