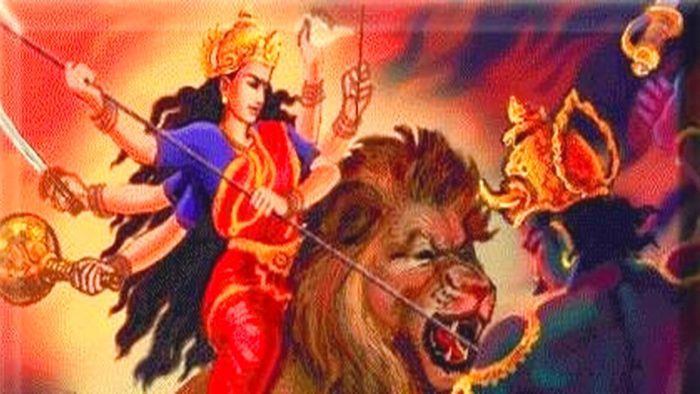 Sugreeva was filled with rage at the goddess’s insolence and rushed to deliver this message to Shumbha. Shumbha summoned his general,

Dhumralochana, and ordered him to bring that evil woman (दुष्टा) in front of him, dragging her by the hair, and to kill anyone who tried to save her.

Dhumralochana rushed with sixty thousand asura soldiers to where the goddess was and ordered her to come with him lest he drags her by the hair. The goddess meekly submitted that with such a powerful person, what else could she do but obey.

Dhumralochana rushed towards the goddess, who reduced the asura general to ashes with a humkara. Thereafter, she showered arrows, spears, and battleaxes on the asura soldiers. Her lion also took part in the battle, slaying some with his paw, some with his teeth, some with his nails.

Upon hearing the news of the complete destruction of Dhumralochana and his army, Shumbha ordered Chanda and Munda to bind and drag the goddess by the hair to him. If that was uncertain, then he ordered that they should kill her. Not only that, he ordered that even her lion should be killed!

Chanda and Munda, along with their army, made their way back to where the goddess was. A slight smile played on her lips. However, as soon as the battle started, her face turned black as ink because of rage, her brows furrowed, and from the base of her forehead, Kali emerged, with a sword and noose. Not only that, she wore a garland of human skulls and held a colorful khatvanga (a staff with a skull on top).

Not only that, she had a terrible appearance because of other aspects of her appearance too – she was clad in a tiger skin, her face was dried up, her tongue lolled out, her eyes were red and sunken, and the roars from her very large mouth pervaded the skies.

She then descended on the asura army, decimating it. The destruction was terrible. She caught elephants and threw them into her mouth.

It wasn’t just the elephants that went into her mouth – the riders guarding the flanks, the drivers with their goads, the warriors, and the bells – everything went into it.

Seeing their army being decimated, Chanda rushed at Kali and hurled innumerable chakras at her. She swallowed all of them, and then rushed at Shumbha. Severing his head, she let out a roar that terrified everyone. Seeing Chanda killed, Munda rushed at her but met the same fate as Chanda.

Holding both their severed heads in her hands, Kali went to Chandika and told her that Shumbha and Nishumbha would be killed by her, Chandika. Chandika told Kali that since she had killed Chanda and Munda, she would thereafter also be known as Chamunda.

With both Chanda and Munda killed by Kali, Shumbha was filled with rage and ordered the most fearsome of warriors to assemble and march to battle. Who were some of the warriors?

Seeing them advance, Chandika twanged her bow, sounded her bell, and her lion let out a roar. The sound pervaded the directions. Similarly, Kali’s roar sounded in all directions.

Thus the battle began. To aid the goddesses in their battle against the asura armies, great energies from emanated from the bodies of the gods and merged with Chandika.

Brahmani emerged from Brahma, Maheshvari from Shiva, Koumari from Kumara, Vaishnavi from Vishnu, Varahi from Hari (Vishnu in his Varaha avatar), Narasimhi from Narasimha, Aindri from Indra.

Shiva then asked Chandika to slay all the asuras. Chandika asked Ishana to go to Shumbha and Nishumbha and tell them that Indra would soon regain his throne when these asuras were killed. But they had a choice.

They could flee to Patala. If they wished to fight, they would be killed, and her jackals would feast on their flesh! Shiva agreed, and thus Chandika also came to be known as Shivaduti.

The asuras obviously disregarded her message and descended on Katyayani. In this battle, all the goddesses fought the asuras.

Kali rained blows from her trident and khatvanga, Brahmani sapped their strength with sprinklings of holy water, Maheshvari killed them with a trident, Vaishnavi with he chakra, Koumari with her spear, Aindri with her vajra, Varahi with her snout and tusks, Narasimhi with her nails.

As the asuras fell down and were crushed, Shivaduti and the Matris ate them. Seeing this carnage, many daityas started to flee.

It was the turn of the fearsome Raktabija to fight. However, as soon as a drop of his blood fell on the ground, another asura, identical in appearance, appeared.

Aindri struck Raktabija with her vajra. Blood oozed from the asura, but as soon as the blood touched the ground, innumerable asuras, identical to him in form and strength, took form.

Whether Aindri struck him with a club, or Vaishnavi with a chakra, or Varahi with a sword, each drop of blood created another Raktabija, till the entire universe seemed to be filled with the daitya.

Seeing this dreadful turn of events, the gods became even more fearful. Chandika told Kali to take up all the blood that flowed from the Raktabijas. As the goddess struck Raktabija, Kali and Chamunda received the blood in their mouths.

Whatever asuras sprang up from the blood that fell in the devil’s mouth were devoured by her. Raktabija, devoid of all blood, finally died. The Matris danced with joy, intoxicated.

King Suratha exclaims that the Devi Mahatmya, as recounted by the sage Sumedha, has been wonderful, and now he wishes to know more. What happened after Raktabija was killed by the goddess, what did Shumbha and Nishumbha do. The brahman continued his account.

Nishumbha marched with another army, surrounded by asuras on all sides, as did Shumbha. As expected, a terrible battle was again fought between the two asuras and Chandika.

After Nishumbha had struck her lion with a sharp sword, she used a sharp-edged arrow to cut down his sword. A spear hurled by Nishumbha was split in two by her chakra, a trident shattered to pieces with her fist! The daitya finally advanced towards her with a battleaxe, but was brought down by Chandika.

It was now the turn of Shumbha, who proceeded in his chariot, weapons in each of his eight arms. Ambika readied herself with a twang of her bow and by blowing her conch. After a long battle, Shumbha was struck by Chandika’s trident, and he too fell down, senseless.

Nishumbha, in the meantime, had regained consciousness, enveloped Kali with ten-thousand chakras from his ten-thousand arms. She cut all of them down and soon pierced his heart with a trident. But another man emerged from within.

An unperturbed Chandika cut off his head with her sword. With Nishumbha killed, her lion devoured asuras, and Koumari, Shivaduti, Maheshvari, Brahmani, Varahi, Vaishnavi, Aindri, and Kali all killed a great number of asuras on the battlefield.