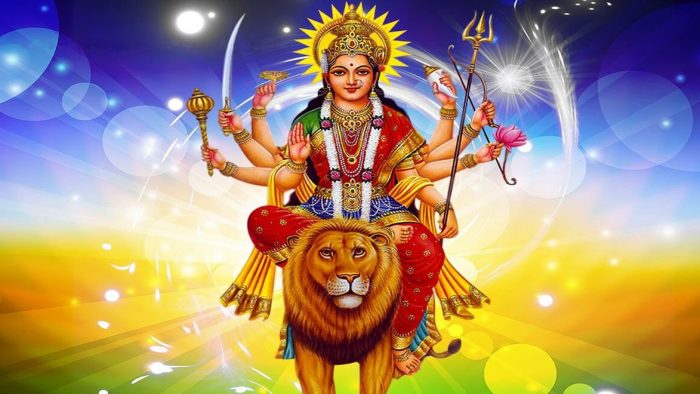 Devi Ambika severed Chikshura’s standard, his bow, destroyed his chariot, killed his horses and charioteer. Finally, Bhadrakali hurled her trident at him, shattering the asura into a hundred pieces.

It was now the turn of the general of Mahisha’s army, Chamara, to advance towards the goddess. A single humkara from her neutralized the spear he had hurled at Ambika.

Chamara’s end, however, did not come at the hands of the goddess. It was her lion that leaped up, dislodging Chamara from the elephant where he was seated. After a brief fight, the lion severed Chamara’s head with its paw.

Seeing his army being destroyed by Ambika, Mahishasura took the form of a buffalo and entered the battlefield. Using his hooves, tail, and horns he killed many and created a huge commotion.

With his roars and the gusts of his breath, he killed many others. Seeing the destruction he was wreaking, Chandika ensnared him with a noose. Mahisha abandoned the form of a buffalo and assumed the shape of a lion.

Ambika severed the lion’s head, upon which he took the form of a man and then an elephant. The elephant grabbed the goddess’ lion in its trunk and started to drag it away. The goddess sliced off the elephant’s trunk.

Mahisha finally took the form of a buffalo again. Chandika consumed some liquor, and roared at the buffalo, taunting him that he could roar only as long as she drank the liquor, after which it would be the gods who would roar when she had killed him.

With Mahishasura dead, the gods now praised the goddess. Everything in the world had been created through her powers, the gods, including Brahma, Hari, and Hara, lacked the powers to describe her powers.

She was Shri for those who did good and Alakshmi to those who were evil. Such was her form and her powers that they, the gods, could not describe them. She was the hymns of the Rig Veda and Sama Veda, and the reservoir of beautiful songs of the Sama Veda.

She was Durga, she was Shri, she was Gouri. Her vanquishing Mahishasura was proof that those who angered her were destroyed.

Those who pleased her were blessed with prosperity. Her form, which created fear in the enemy, couldn’t be compared with anything.

All the gods said they bowed before her. Addressing her as Ambika, Chandi, Ishvari, the gods entreated her to save them with her weapons, to save them in all directions, in all the three worlds.

Pleased with the gods’ praise and worship, the goddess said that she had accomplished what they had asked her to and that no other difficult task remained for her to accomplish. The gods agreed with Maheshvari but prayed that if there were trouble again and the gods prayed to her, she would manifest herself again. Bhadrakali agreed and vanished.

It thus came to pass that the goddess had to manifest herself again, from Gouri’s body, for slaying the asuras Shumbha and Nishumbha.

Rishi Sumedha continued his account of the goddess. Devi Ambika had acceded to the gods’ request to help them when needed.

The gods remembered the goddess’ boon to them to manifest herself when the gods beseeched her.

The gods made their way to the Himalayas and began to praise Vishnumaya the goddess.

Even as the gods were praying to the goddess, Parvati arrived there and asked the gods who they were praising. At that moment, from the sheaths of her body, Shivaa (not Shiva) manifested herself and answered Parvati’s question – all the gods had been chanting the hymns in praise of her. Since Ambika had emanated from the sheaths of Paravati’s body, all the gods referred to her as Koushiki.

After she manifested herself, Paravati turned dark and was thus also called Kalika. Ambika then assumed a radiant and beautiful form and it was in this form that Shumbha and Nishumbha’s servants spotted her.

These servants were none other than Chanda and Munda! They rushed to Shumbha and gave an account of the beautiful woman they had spotted. Since the two brothers, Shumbha and Nishumbha had seized all the jewels from the gods – Airavata, a jewel among elephants, Mahapadma from Kubera, Varuna’s umbrella, Mrityu’s javelin Utkrantida, and so on – Chanda and Munda suggested that Shumbha take that woman as her queen.

Shumbha needed no other reason. He sent Sugreeva, his messenger, to Ambika, with the message that since Shumbha was now in possession of all the divine jewels that had earlier been in the possession of the gods, it was only natural that the goddess – a jewel – belong to Shumbha or his younger brother Nishumbha.

Durga Bhadra chose to toy with the messenger and the brothers. She replied that she had taken a vow at a time when her intelligence had been limited(!), that only one who defeated her in battle, who equaled her strength, and who destroyed her pride, would be her husband. Much as she wished to agree to Shumbha’s message, she was bound by her vow.

The messenger, shocked, tried to reason with her, telling her that even gods had not been able to withstand the brothers, that she stood no chance, and ending with the warning that if she didn’t willingly accede, she risked being dragged by her hair to the brothers.