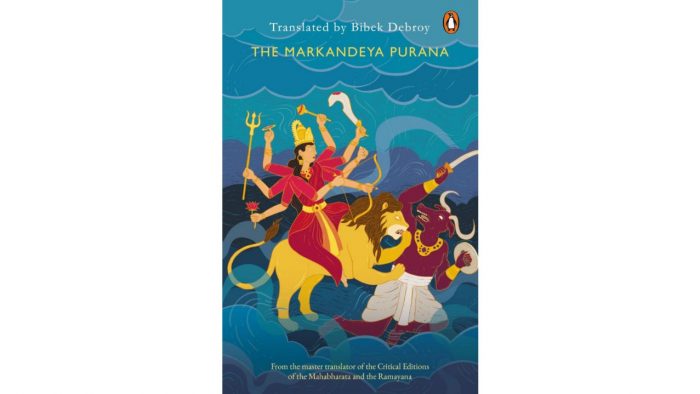 Of these six and a half thousand shlokas, the Devi Mahatmya comprises a little under six-hundred shlokas, contained between chapters 78 and 90. Introductory verses added to the Devi Mahatmya result in 700 shlokas, and that is known as the “Chandi or Durga Saptashati (seven hundred)”.

The sage Kroushtuki asked rishi Markandeya about the Manus. Markandeya started by telling him that the eighth Manu was Savarni, Surya’s son. He came to be the Manu on account of the favors of Mahamaya (Devi).

To get to that, we first need to go to the Svarochisha manvantara and a king named Suratha. The Markandeya Purana itself tells us that fourteen-thousand divine years is one cycle of the four yugas – krita, treta, Dvapara, and kali. A thousand such maha yugas make one day of Brahma. These are divided into fourteen kalpas, and there is a Manu in each of these fourteen kalpas.

The period during which each Manu presides is known as a Manavantara. Coming back to our story, Suratha was defeated in a battle with the Kolas because of his advisers and lost his kingdom and riches. Dejected, depressed, he went to the forest on the pretext of a hunt. There he met a brahmana named Sumedha and a dejected-looking vaishya named Samadhi. The vaishya told him that he had lost all his wealth to his wicked wife and evil sons.

However, he still thought about his family. That was as surprising to Suratha as it was to Samadhi himself. Both presented themselves to the sage Sumedha. The king had the same dilemma as Samadhi, and asked the brahman for answers – despite having lost everything, they still retained a sense of attachment to those material objects, a sense of “mine“.

The rishi replied that this sense of attachment was on account of Mahamaya – the great illusion. Mahamaya the goddess, the brahmana said, had originated from Hari at a time when he had been immersed in yoga. Mahamaya deludes even the intelligent ones, is the reason behind the ‘bondage of samsara’, and the reason behind emancipation. Obviously, the king wanted to know more!

At a time when the entire universe was submerged, Vishnu was asleep and lying down on Shesha. At such a time, two demons – Madhu and Kaitabha – manifested themselves from the wax of Vishnu’s ears and prepared to kill Brahma. To propitiate Yoganidra and awaken her, Brahma praised her. The verses he chanted in her praise are known as the Ratri Suktam – originally present in the Rig Veda, but also included as a subsidiary text of the Devi Mahatmya.

Brahma chanted these shlokas, praising and describing her as Vishwehwari, Nidra, Svaha, Svadha, Sandhya, Savitri, Mahavidya, Mahamaya, Mahamedha, Mahasmriti, Kalaratri (night of destruction), Maharatri, Moharatri (night of delusion), Shri, Ishvari, and more, ending with a plea to wake Achyuta up from his slumber and defeat the asuras, Madhu and Kaitabha.

Thus praised, the goddess emerged from Vishnu’s eyes, nose, arms, heart, and chest. He woke up, saw the two asuras and a great and long battle between the three took place. Dazed by Mahamaya, they sought to give a boon to Keshava.

Seizing upon the opportunity, Keshava asked that the two die at his hands. Realizing their folly, the two tried to make the boon an unattainable one and asked that their deaths at his hands come at a place where there was no water. Remember that this was at a time of the great deluge, with the entire universe flooded! Keshava agreed, placed them on his thigh, and sliced off their heads with his chakra.

Having told both Suratha and Samadhi how Mahamaya was praised by Brahma, how Vishnu was awakened, who then proceeded to kill the asuras, Madhu and Kaitabha, Sumedha now proceeds to tell the two the powers of the goddess.

Once upon a time Mahishasura was the leader of the asuras. He defeated Indra and took his place, driving him and the gods out. A dejected Indra went to Shiva and Vishnu for help. Hearing Indra’s tale of woe, both Shambhu and Madhusudana were filled with rage.

From that rage and from the energy of the other gods assembled there emanated a great mass of energy. This energy coalesced into the form of a woman.

The Markandeya Purana tells us that different parts of her body were formed from the energies of different gods – of Shiva, Yama, Vishnu, Soma, Varuna, Brahma, Arka (Surya), Vasus, Kubera, Prajapati, Pavaka, Sandhya, Anila, and so on.

Next, the gods gave her weapons fashioned from their respective weapons – Pinaka his trident, Krishna his chakra, Varuna a conch shell, Hutashana (Agni) a spear, Indra a vajra and a bell from Airavata, Yama a rod, Varuna a noose, Surya his rays, Kala a sword, Vishwakarma a jewel, earrings, bracelets, and other ornaments along with an axe, Himalayas a lion as her mount, Shesha a necklace made out of serpents (naagahara), and so on.

Thus armed, the goddess let out a great roar that made the mountains tremble and oceans quiver. The tremors alarmed Mahishasura also, who rushed towards the goddess along with his asuras. Among those who fought against her were Chikshura,Chamara, Ugra, Mahahanu, Asiloma, Bashkala, Ugradarshana, Bidala, and they fought with a huge number of asuras and weapons. Ishvari destroyed all of them, cutting down their astras with her own astras. With a great breath, Ambika created countless ganas, who joined in the battle against the asuras. In that terrible battle that ensued, countless asuras were struck down, even the great roar of her lion causing a great number to die out of fear………to be cont’d