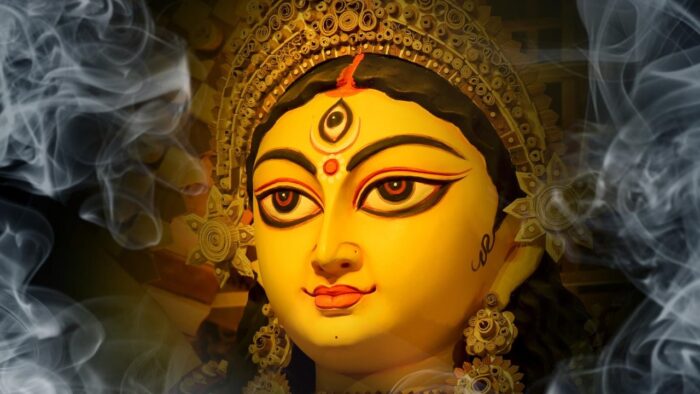 The tradition of Shakti worship is integral to the Sanatan Dharma. Durga as the universal mother is the essential unifying factor of nature and the existence of life. She is portrayed with various feminine emotions as a Kumari kanya, a consort, a mother, a warrior princess, a regal queen, a high priestess, and a Yogini.

The word Durga means-the unconquerable. Derived from the Sanskrit word , Durga meaning Fort – Devi Durga acts as a fort in shielding her devotees from adversities, miseries and evil vices. Devi Durga, the Divine Mother is symbolic of a creator and a destroyer; a caretaker and caregiver; a preserve and a liberator; a symbol of sacrifice and as the all powerful protector of the humankind. Created by the amalgamation of Devi Lakshmi- The Goddess of Wealth; Devi Saraswati – The Goddess of knowledge and Devi Kali –The Goddess of Time, Devi Durga is the epitome of ultimate power infused in the moral fiber and endurance of a woman.

Every year as Bharat bids farewell to the monsoon showers, around the months of September and October, the festive spirit of India is all set to welcome the Universal Mother – Maa Durga. In the Hindu month of Ashvina, the Devi manifests herself as Nava Durga, in nine different variations on each of the nine days. As these special nine days fall during the Sharad Ritu, the celebration is popularly known as the Sharadiya Navratra.

Decked with glittering jewellery and an arsenal of weaponry, Devi Durga is portrayed with the slain buffalo-headed demon as Mahisasura Mardini. Mahis Asura, lies defeated and bleeding at her feet as she gives a jubilant audience to her devotees. Devi Durga’s depiction as the slayer of evil and the protector of the creation affirms the victory of good over evil and the spirit of universal motherhood.

The weapons she carries are symbolic messengers that bear the teachings of a dedicated mother to her children. Each weapon signifies qualities that are essential requirements for the overall development and preservation of humankind. The interpretation may vary but the messages ensure human well being.

The Chakra -Disc is a symbol of righteousness and represents Dharma. It also signifies change. It confirms the inevitable change that is a part of life, which under all circumstances should be accepted and dealt with by following the principles of Dharma.

The Shanka – Conch is symbolic of the syllable ‘Om’ that signifies consciousness. It represents the resonance of contentment and happiness under the harshest conditions. It encourages in cultivating dedication to perform any given task with a positive and cheerful mind.

The Khadaga-Sword stands for the elimination of vices and evils from the personality. The sharpness of the sword also depicts the sharpness of intellect that evaluates the difference between the good and bad. It also ensures the ripeness in decision, allowing us to select and restrict deeds accordingly.

The Dhanush and Vaan – Bow and Arrow held by the Goddess symbolize the strength of character and the importance of holding on to our ethics even during the worst phase in life.

The partially bloomed Padma–Lotus denotes humbleness and selfless dedication without expecting anything in return. The beauty of the lotus overshadows the murky water where it blooms and spreads its charm, but that does not allow the lotus to leave its ground. Similarly wealth, prosperity and success should not permit us to forget our struggles and humble beginnings. The lotus is a reminder that confirms the fact that change is constant, success is not concluding.

The Trishul– Trident denotes the conquering of three humanly qualities that includes laziness, desires and pessimism. It is a reminder that these three qualities in any human are a cause of grief hence should be done away with at the earliest.

The Gadda-Club is the link that connects the Divine and the human. The deep faith of human beings to display devotion, love and commitment towards the Almighty Divine is conveyed through the club.

The Vajra -Thunderbolt the weapon of Dev Raj Indra made of Maharishi Dadhichi’s bones, symbolizes firmness of spirit in helping to shatter the problems encountered in life without losing confidence. She empowers her devotees with unshaken confidence and will power to achieve the unthinkable.

The Sarpa–Snake is Indicative of the upward movement of consciousness, from the lesser state of realization to the higher state of subsistence. It is suggestive of the elevating spiritual journey one undertakes.

The Parashu-Axe of Maa Durga and an armour was given to her by the Divine architect Vishvakarma, signifies fearlessness towards consequences when combating the evil.

With progression in time the ugra– fierce Chandi, the warrior Goddess was reclaimed to a Goddess Mother. We presently relate to the motherly depiction of the Goddess. The highest and most acceptable manifestation of the Devi Durga is as the mother.  The mother principle of Durga is well described in the Saptasati Chandi that proclaims-

The motherly image of Goddess Durga, a representation of the feminine energies of Shakti celebrates the essence of womanhood. Durga represents the inherent capacities of a woman that are calm unless outburst is absolutely necessary. It depicts the giving nature of a woman who strives to improve and safeguard her children in the most drastic and challenging situations.

Meaning: Due to lack of knowledge of the procedures of worship, due to lack of prosperity and wealth, also due to my lethargic nature, it was not possible for me to serve your Lotus Feet. There have been disappointments in the performance of my duties and that I acknowledge before you. All these mistakes and failures are forgivable by you, O Mother; because you are the protector of all, O auspicious Mother. There can be fallen rebellious sons turning away from Mother, but there can never be a Mother turning away from son permanently.

In the Abhaya Mudra the Dus Bhuja –Ten Hand Goddess Ma Durga always has one hand dedicated towards blessing her devotees. She is the representation of the spiritual imperative power that is instrumental in driving out demonic vices that include rage, selfishness, greediness, ego and worldly attachment thus granting Moksha. As the universal Mother she guides her children to become self aware and responsible towards the society and towards self.