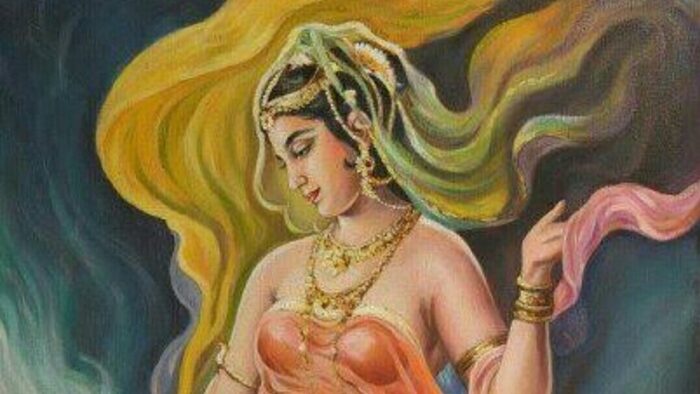 The Apsaras are enigmatic and enchanting. Every Apsara plays a role to enhance the storyline in the huge network of Hindu Puranic kathas. These stories are interwoven with each other keeping the central theme and characters in prominence.

These Apsaras of Brahma are not just symbols of beauty but also have significance in the manner they have been presented in the Puranic canvas conveying a message, imparting a lesson, communicating a moral, developing a subplot, merging with the main plot, and finally completing the storyline.

Every Apsara has her inherent importance and intrinsically contributes to the development and merits of the Puranic texts. As conveyed in the religious Hindu scriptures, being an Apsara was not easy, it involved dedication and the flair to take risk of losing a place in the court of Devendra or attracting an unpleasant curse.

There are many such Apsaras who became reasons for attraction, immorality, desires, distraction finally causing conscious realization. One such celestial nymph was Apsara Vishwachi.

Shukra – Venus , an important Graha– Planet in the Navagraha mandala was the son of   Maharishi Bhrigu/ Bhrugu . Once when Maharishi Bhrigu was engaged in penance and deep meditation on the Mandarachal Mountains , his son Shukra remained there along with him as his attendant. Shukra looked after his ritualistic requirements and remained at his beck and call of his father, as and when required.

As per myth, once when Maharishi Bhrigu had transcended into deep meditation, Shukra was at leisure looking up at the sky. Suddenly his eyes fell on a beautiful celestial nymph descending. Upon seeing the Apsara he was spellbound by the charm of her beauty and continued to stare at her. In order to try and divert his mind from the Apsara,  Shukra undertook a  mental journey to Indra’s Kingdom Amravati.

There in the court of Indra, Shukra was welcomed by Apsara Viswachi the celestial maiden he had seen descending from the sky a while ago. He was again fascinated by her charisma and continued to yearn for her company.

Apsara Viswachi was also very attracted to him. Shukra made a hut in a corner of Indralok and covered it with darkness. Then Shukra and Apsara Viswachi enjoyed coitus in that hut for eight Chatur-Yuga.

After remaining in the bliss of love, Shukra was drained of his good deeds and soon fell out of heaven. Apsara Viswachi too lost Indralok to Prithvi- Earth. Shukra reached the Moon and from there he came down to the Earth with rain. His soul landed on Earth and rested in a paddy field. A Brahman gathered rice grains from the paddy field where Shukra’s soul rested. He cooked the same rice and ate it.

Now Shukrs’s soul had entered the Brahman and soon was transferred to his wife’s womb through his semen. The Brahman was blessed with a son. Shukra was born as a child in his family. As a Brahmana’s son,  Shukra learned the Vedas from him and was engrossed in penance.

During this period, Apsara Viswachi was cursed to live as a doe on Earth. Shukra saw the doe and recognized his love Apsara Viswachi, he again fell in love with her and ended up copulating. The child born from the relationship was very lively and did not allow Shukra to meditate.

Soon Shukra died of snakebite. Thereafter, Shukra was born as the King of  Madra; he was next born as a bamboo forest; followed by being born as a python next.  Finally, he was born to a Rishi on the banks of the River Ganga.

This was a mental journey that Shukra was undertaking while his body remained an attendant to his father Maharishi Bhrigu.  In these years, his original body sitting next to the Maharishi Bhrigu was worn out but had not decayed. Maharishi Bhrigu opened his eyes after thousand years of penance and found his son’s worn-out body nearby.

Maharishi Bhrigu was furious and was about to curse Yamraj- The God of Death for his son’s premature death. Yamraj appeared and explained to Bhrigu that Shukra was responsible for his present deplorable state.

Yamraj shared with Maharishi Bhrigu Shukra’s mental journey in which followed Apsara Viswachi to heaven where he had fallen in love with her, which caused his unworthy demise. He then suggested Maharishi Bhrigu use his power of visualization to witness Shukra meditating on the banks of the River Ganga.

Soon,  Yamraj revived the carcass of Shukra.  Shukra apologized to his father for the insane folly committed. Maharishi Bhrigu then showed him ways to saintly success.

Shukra then performed penance and worshiped Lord Shiva for six thousand years. Pleased by his penance Lord Shiva endowed Shukra with the knowledge of Sanjeevini Vidya. The extraordinary knowledge of Sanjeevni Vidya enabled Shukra to raise the dead people by giving them life. This power made him greater than Guru Brihaspati – Jupiter.

Due to his power to bring alive the dead, the Asuras prayed to him and thoroughly obeyed him. He also was revered as the Guru of the Asuras. Shiva then blessed Shukra to be the best planet in the sky. All auspicious events would be performed only when Shukra adorned the sky.

Meaning: I bow to Lord Shukra, the descendent of Maharishi Bhrigu, and the one who is mounted on a white horse. Let his blessings illumine my consciousness and enlighten my consciousness.

Ever since, Shukra, is the emblem of love and attachment. Shukra’s influence on the world is the strongest of all the planets. He is associated with delicious cuisine, delicate art and melodious music, pleasant and polite people, and all sensual pleasures. He is the force of duality and confirms the presence of pure and impure within all.

Once Chandra Vamshi King Yayati fell to a curse from Shukra. Shukra cursed him to become old, wrinkled, and ugly during taking away his youth. King Yayati pleaded to Shukra for reversing his curse. Shukra altered the curse and allowed Yayati to swap his aged persona with someone young and youthful.

Yayati called his young sons and requested them to swap their youth with him. None agreed except the youngest son, Puru. Yayati transformed himself into a young man and gave his elderly self to Puru. With an old body, Puru ruled the kingdom.

With his rejuvenated self Yayati engaged himself in sensory enjoyment with Apsara Viswachi. Yayati remained engrossed in physical enjoyment for a millennium. Apsara Viswachi and Yayati had a  daughter named Madhavi from King Yayati. Madhavi was blessed to retain her virginity each time after giving birth. Madhavi mothered four great Rishis named- Ashtaka, Pratardana, Shibi Chakravarti and Vasumanas.

After thousand years of sensory enjoyment, King Yayati’s sensual appetite remained unsatisfied, his desire remained unfulfilled as he yearned for more.  Then he remembered the words which conveyed that even if one enjoys the whole earth with all its riches, women, kingdom, one will not be completely satiated.

Meaning: It is desire, which is anger, which is born of rajas guna. It is insatiable and pure evil. It is the greatest enemy of man in this regard. Just like smoke covers fire and dust covers a mirror, preventing one from seeing the light, the same way gyan is clouded by desire, which is unending.

In Apsara Viswachi’s company, King Yayati understood the folly he had committed for years. He realized that he could never be entirely satisfied. He then took back his old age from his son Puru and restored Puru’s youth.  Yayati dedicated himself to meditation and finally headed with his daughter Madhavi and her Rishi sons to Vaikuntha.

Apsara Viswachi’s presence in both Shukra and Yayati’s life conveys that lust has many dimensions that ignite the urge for wealth, physical cravings, reputation, drive for power, esteem, ego, and so on. When the desire is satisfied, it develops self-indulgence; and when it is not fulfilled, it gives rise to irritation. One commits sins under the influence of all three – lust, greed, and anger. It is the lust for worldly pleasure that causes involuntary sin.

Apsara Viswachi satisfies King Yayati’s yearning for never-ending carnal desires. She finally made him realize that desires are limitless and can never be quenched. The curtailing of these desires makes a human absolute leading him on the path of achieving Moksha. As Shukra’s love interest, Apsara Vishwachi became a reason for his fall, rise, and finally his influential existence as a planet of the Navagraha mandala.