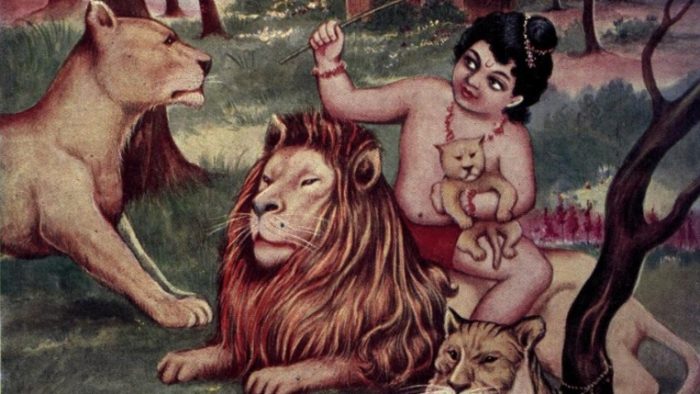 The Apsarās as described in the Hindu Puranas is the most yielding arsenals of charisma with footprints of profound impact. These celestial Apsarās, endowed with utmost enchanting charm of attraction through their perfectly crafted bodies and mystical powers were sincerely submissive but at the same time overtly influential to reap the required consequences.

As described in the Hindu scriptures, these wonderful enigmas of heaven were instrumental for laying the foundation of several dynasties. The Apsarās served the draught of loveliness which made the powerful sages surrender to their allure and persuade the most influential kings to give up their kingdoms.

The narrative of Apsarā Pūrvacitti and King Āgnīdhra portrays the king’s effort to achieve his goal of liberation and a place at Pitraloka, by being deeply devoted to an Apsarā, whom he loved intensely. It also gives a lead to the creation of the country where we live Bhārata-varṣa.

King Priyavrata after leading a fulfilling life of luxury decides to isolate himself from worldly affluence. In order to achieve liberation from mortal life, he gives up his kingdom. He passes the reins of his magnificent kingdom, Jambudwipa to his able son Āgnīdhra and sets out to follow a devout life. King Āgnīdhra takes charge of the kingdom and rules Jambudwipa with complete dedication, by adhering to the principles of religious conviction.

Āgnīdhra is engaged at practicing yoga, trying to control his senses with the desire to beget a son and become a dweller of Pitraloka. King Āgnīdhra in order to achieve his goal practices mystical yoga in the valley of Mandara, by worshipping Lord Brahma- The creator.

Impressed by King Āgnīdhra’s dedication, Lord Brahma decides to give him the best companion. He assigns Apsarā Pūrvacitti to be his wife and help him fulfill his desire for begetting a son.

Apsarā Pūrvacitti was a paragon of absolute splendor and also a companion to the Sun God. She took the orders from Brahama Dev and proceeded for the implementation of the task assigned. While the king was engrossed in meditation Apsarā Pūrvacitti stole her way to the valley of Mandara, softly jingling her anklets.

King Āgnīdhra lost control of his senses, he was captivated by the sweet smell she spread and the harmonious tune her movements created.

Āgnīdhra instantaneously opened his eyes and saw Apsarā Pūrvacitti sway to the rhythm of the sweet melodious anklets, as she walked in front of him. Apsarā Pūrvacitti had all the features that could attract the king.

The Apsarā smelled as sweet as the flowers and a swarm of honey bees followed her. Apsarā Pūrvacitti’s shyness, modesty, her evasive glances, and the delicate shift of her limbs had imprisoned the senses of King Āgnīdhra. He was completely subdued, seeing her in front of him. Āgnīdhra spoke to her inquisitively and enquired about her whereabouts. He praised every part of the damsel’s body, making her feel wanted and special.

He compared her eyebrows to bows that could shoot fire to ignite desire. Her hips, he compared to the ball-shaped Kadamba flowers and her breasts decorated with red powder he imagined to be similar to the rising sun. He compared Apsarā Pūrvacitti’s face to a serene tarn in which her eyes were set like impatient fishes. Her pearl white teeth were similar to a row of swans and her black long hair resembled a swarm of bees.

Āgnīdhra was profoundly fascinated by Apsarā Pūrvacitti’s beauty; he surrendered to her gorgeousness and proposed for marriage.

Meaning: Oh! Beautiful one, Lord Brahmā, who is worshipped by the Brāhmaṇas, has very fortunately given you to me, the reason why I have met you. I do not want to give up your company, for my mind and eyes are fixed upon you and cannot be drawn away. Oh woman! With beautiful raised breasts, I am your admirer. You may take me wherever you like, and your friends may also follow me.

Impressed by king Āgnīdhra’s flattering and pleased by an array of the exotic description he made to praise her, Apsarā Pūrvacitti’s is delighted and agrees to his proposal for marriage.

Meaning: Attracted and convinced by the intelligence, learning, youth, beauty, behavior, opulence, and magnanimity of Āgnīdhra, the King of Jambūdvīpa and master of all heroes, Pūrvacitti lived with him for many thousands of years and luxuriously enjoyed both worldly and heavenly happiness.

Āgnīdhra was heartbroken without Pūrvacitti, he could not tolerate her absence. He decided to join her in heaven. King Āgnīdhra divided Jambudwipa into nine equal regions and gave one region each to his nine sons. Each region was named after Āgnīdhra’s son who ruled it.

Thereafter Āgnīdhra prayed to Lord Brahma to unite him with his celestial wife- Apsarā Pūrvacitti’s. The desire was fulfilled and Āgnīdhra resided with his wife at Pitralok- The realm of the forefathers.

Meaning: After Pūrvacitti’s exit, King Āgnīdhra, desires were at loss. He always thought of her. Therefore, in accordance with the Vedic rules, Āgnīdhra, after his death, was allowed to reside with his celestial wife at Pitṛloka- where the Pitās, the forefathers, lived with great delight.

The Foundation of Bhārata-Varṣa

Subsequently, after the departure of King Āgnīdhra to Pitralok, his nine sons got married to the nine daughters of Meru named- Merudevi, Pratirupa, Ugradamstri, Lata, Ramya, Syama, Nari, Bhadra, and Devaviti.

Nabhi the king of Ajanābha married Merudevi who was blessed with a son named Rishabhdev, the first Tīrthaṅkara of Jainism. Heir to Nabhi’s kingdom, Rishabhdeva married Sumangala and was blessed by ninety-nine sons including and one daughter.

One of his sons was named Bharat. Rishabhdeva later passed the reign to his son Bhārata. During the virtuous rule of Bhārata, the kingdom gained fame and came to be known by the name of its righteous king as Bhārata-Varṣa, the country we live in today.