Apsara Madhura Part XVI: A Frog. A Queen. A Panchkanya. 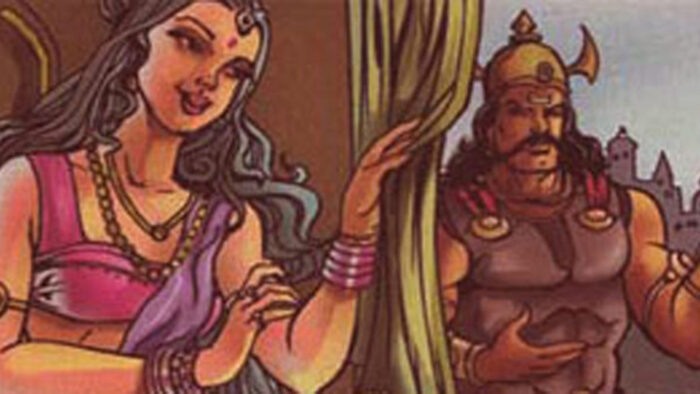 Apsaras, the nymphs of Dev Raj Indra’s court were endowed with charm, beauty, and magical traits. Many Apsaras were successful in implementing Devindra’s plans by weakening his enemies.

The targets of Indra fell to these Apsaras sent by him as entice to ruin their endeavor. In the process of felling Indra’s threats, these Apsaras became an important part of the Puranic storytelling flow. While some of these Apsaras were means of temptation, some also attracted curses and spent years to redeem themselves from these curses.

Curses and boons had transformed the existence of many Apsaras. Several curses altered these celestial Apsaras into animals. Apsara Varga and her other celestial companions Saurabheyi , Samichi , Vudvuda and Lata were cursed to remain as Crocodiles for hundred years and later released to become the Pancha Nari Tirthas.

Similarly, Apsara Ghritachi turned herself into a monkey to free Viswakarma from a curse by Rishi Ritdhwaj and parented Nala -the architect of Ram Setu in the Ramayana. Apsara Viswachi, a celestial maiden was cursed to live like a doe on Earth.

Similarly Apsara Madhura was cursed to live the life of a Manduki– a frog before she is celebrated as one of the Panchakanyas– the five eternal virgins of the Hindu Puranic Scriptures.

Apsara Madhura was a beautiful heavenly nymph. She was pious, fair, slender and sharp. She was sober and soft spoken with an attractive gait. She had a pair of twinkling eyes and the charm to ignite the desire of any man. She was a dedicated devotee of Lord Shiva and was engaged in his worship.

In the Uttara Ramayana there is a mention of Apsara Madhura and the myth of her as a frog. There are various mentions of the same myth with variations in the several retellings of the Ramayana. As per myth, Apsara Madhura was an ardent devotee of Lord Shiva. She would sincerely pray to Lord Shiva.

Once, when Parvati was away from Mount Kailash, Apsara Madhura visited the Kailash Parvat to meet Lord Shiva. Infatuated by the Apsara Madhura’s beauty and dedicated worship, Lord Shiva was attracted towards the celestial nymph. He got so aroused seeing her beauty and sincerity that he swayed into the act of copulation with her.

When Devi Parvati learned about the coitus between the two she was furious. In rage Devi Parvati, cursed the heavenly nymph and turned Apsara Madhura into a Manduki. Lord Shiva intervened and consoled Apsara Madhura. He convinced her that she would once again become a beautiful woman and marry a powerful man after completing her curse period of twelve years.

Apsara Madhura lived with the curse in a well as a frog with the sperm of Lord Shiva lodged inside her.

Mayasura, the son of sage Kashyapa and Danu was the king of Asuras. Hema was an Apsara in Indra’s court who was assigned the task of luring Mayasura . Once when Mayasura visited Indrapuri  he saw Apsara Hema and fell in love with her . He and Apsara Heme were married and had  two sons- Mayavi and Dundubhi.

The Asura king and Apsara Hema had longed for a daughter. In the desire for a daughter they started performing Yajnas to seek the blessings of the Lord Shiva. Impressed by their dedicated worship, Lord Shiva granted them their wish to parent a daughter.

Shiva guided them to the well where Apsara Madhura had been living as a frog for the past twelve years and asked them to adopt the frog as their daughter. Mayasura and his consort Apsara Hema followed Lord Shiva’s instructions and reached the well. They heard the frog calling for rescue and reached it.

They got the frog out of the well after twelve years, by the grace of Lord Shiva. The moment the frog was rescued it took the form of a female. The beautiful female was adopted by Mayasura and Hema.

The sperm of Lord Shiva rested in Apsara Madhura’s womb as a frog for twelve years.  She is believed to be given the name Mandodari derived from two root words-

The name may be transcribed to as- ‘slow, womb… a lady with slow conception’.

Ravana once visited Mayasura and upon seeing his beautiful daughter Mandodari he fell in love with her. He proposed to marry her and soon they settled in the bond of matrimony. Lord Shiva’s promise had taken shape and now Apsara Madhura, after living the curse for twelve years as a frog, had become the wife of Lanka pati Ravana.

Prince Indrajit was recognized as the eldest son of Ravana. She had two more sons from Ravana -Atikaya and Akshaya Kumara.

There are several variations to the above myth. The Mahari Pancha kanya dance Abhinaya, performed by the Maharis for Shri Jagannath recounts a different myth of Mandodari’s origin. It narrates that a snake poisoned a sage’s urn of milk. When the act of poisoning was going on, a frog silently watched the process.

Realizing the consequences it would cause to the sage, the frog jumps into the bowl of milk and dies right away. The sage, on his return, sees the frog floating in the milk.  Unknowing the fact that the frog had saved his life by drowning in the poisoned milk, the sage curses it for its greed.

The curse of the sage reverses a previous curse and the frog turns into the beautiful damsel Mandodari.

Apsara Madhura – One of the Pancha kanyas

Draupadi and Kunti are from Mahabharata; while Ahalya, Tara and Mandodari are women from the Ramayana. These women had strong points of view and empowered women socially and culturally.

Like Ahalya, Tara, Sita and Draupadi; Mandodari is also

Meaning:  not born from a woman.

All the pancha kanyas did not have mothers, they all had supernatural births. They symbolized the panch tatvas- earth, water, fire, wind, and sky. Each one of these kanyas is born of one of these natural elements.

One should forever remember the panchakanya who are the destroyers of great sins.

The curse of Devi Parvati causing the transformation of Apsara Madhura into a manduki victimized the Apsara for her attraction towards the Divinity of Lord Shiva. Her adoption by Mayasura and Apsara Hema as Mandodari made her the wife of the most popular antagonist of the Ramayana- Lanka Pati Ravana.

The transition from Mandodari -the queen of Lanka; to the widow of Ravana and then remarriage to Vibhishana establishes her as a powerful ambassadorial woman; finally achieving a position as one of the Pancha Kanyas eternalized her.

As a Panch kanya she elevated herself as an ideal virtuous woman with vision and compassion. She portrays exceptional qualities that include – commitment, perseverance, unconditional love, sincerity, loyalty, and selflessness.  She capably performed her prescribed duties as a mother, sister, wife, daughter; creating influential opinions.

The Ramayana is incomplete without Queen Mandodari, reputed as a righteous Queen of the villainous King of Lanka, who was once Apsara Madhura.