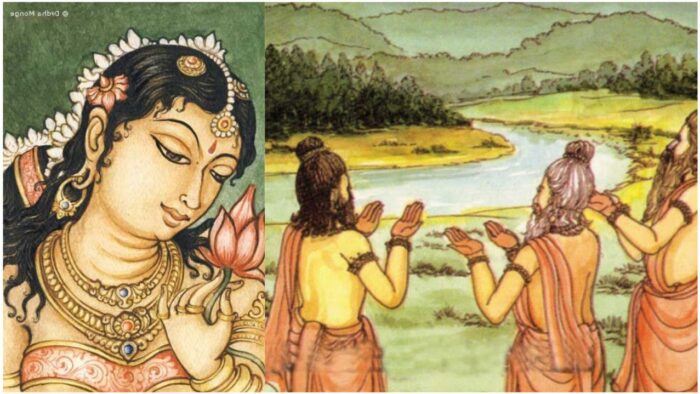 The expeditions of the Puranic Apsara are mesmerizing and magical. They had their footprints imprinted with enchanting enigmatic charm both in heaven and on earth; in air and in water, on humans and on Gods.

They have been the emulsifiers of passion and the compasses who gave direction to the Puranic stories adding an ethical ingredient to the plot.

The Apsaras went with the flow of the Puranic storytelling linking vital incidents and characters to the main chasm of  Vedic and Puranic literature flow. Each Apsara is unique, yet shares some commonality with others belonging to the clan of mythical characters.

Each has a captivating charm yet persuades responsible thought. The present narration of Apsara Alambusha depicts the pinnacle of creative storytelling in the Puranas,  put forward in the most credible manner.

Meaning: At last for tempting the sage, despatched unto him the exceedingly beautiful and celestial apsara, by name Alambusa.

Meaning: On the very sight of that damsel with beautiful limbs, the vital seed of that ascetic of cleansed soul came out. It fell into the Sarasvati, and the latter held it with care.

After the birth of Sārasvata, he was taken to his father Maharishi Dadhichi to seek his blessings. River Sarasvatī introduced Sārasvata to Rishi Dadhichi speaking the following words-

Maharishi Dadhichi was happy to know about his son Sārasvata. He blessed him with knowledge of the Vedas. Maharishi Dadhichi revealed that later when the Earth would suffer from a severe drought for 12 years, and the Brahmins would forget the Vedic verses, only Sārasvata would remember the Vedas. He would be the one responsible to remind the Brahmans of the lost Vedic verses.

Maharishi Dadhichi then bestowed a boon upon the river Sarasvatī.

Meaning: Gratified with River Sarasvatī, the great Dadhica then gave a boon to her, saying, ‘The vishvadevas, the rishis, and all the tribes of the Gandharvas and the apsaras, will henceforth, O blessed one, derive great happiness when oblations of thy water are presented unto them!’

In the Mahabharata, River Sarasvatī appears above all sacred rivers, along which pilgrimages are made.

Indra, the king of Swarga- heaven was once driven out of his kingdom by a demon named Vritra. Asura Vritra also stole all the water available in the world for his own use and for the use of his Asura army. Asura Vritra aimed at finishing humankind leaving them to die of thirst and hunger. His motive was to allow no God or Demi-God to stay alive to challenge his place in Swarga.

Vritra had acquired a boon that he could not be killed by any known weapon in use. He would not be killed by anything that was either wet or dry or any weapon made of wood or metal. The boon made him imperishable. The scarcity of water became unbearable and all the Rishis living on the banks of the river Sarasvatī began to migrate to other places in search of water to save their lives.

Maharishi Dadhichi’s son Sārasvata was the only one to remain on the banks of Sarasvatī. He was supplied with three fishes by river Sarasvatī as food. Eating fish from the river, Sārasvata engaged himself in meditation and in the study of the Vedas.

The famine lasted for 12 years and got over when Indra approached Lord Vishnu for help.  Shri Vishnu revealed to Indra that the only weapon that could kill Vritra Asura was a Vajra – thunderbolt made from the bones of the Maharishi  Dadhichi.

Maharishi Dadhichi made the eventual sacrifice of laying down his life so that his skeleton could be used for making the thunderbolt. Thus the Vajra was made from Rishi Dadhichi’s bones. This Vajra was the ultimate weapon used by Indra to defeat Vritra Asura, allowing Indra to regain his place as the king of Indrapuri and also in releasing the water for all living beings.

Rishi Sārasvata The Teacher of Vedas

Meaning: 60,000 munis became disciples of the regenerate Rishi Sārasvata for the sake of acquiring their Vedas from him.

Soon all the Sages accepted Sārasvata as their teacher of Vedas. Sārasvata taught the Vedas to Sixty thousand Rishis. Thus, Maharishi Dadhichi’s blessing was realized and Sārasvata came to be known as the great teacher of the Vedas. The hermitage of Sārasvata became famous by the name Sārasvata tīrtha.

Initially, the role of Apsara Alambusha was a mere diversion planted by Devindra to amuse and engross Maharishi Dadhichi, but in the process, she became the reason for Rishi Sārasvata birth and he, in turn, became the rescuer of Vedas.

Apsara Alambusha did the most imperative task of saving dharma through Rishi Sārasvata, if it was not her then Rishi Sārasvata would have never taken birth. Divine arrangements have their own ways of creating smaller and bigger reasons for guarding diverse consequences. The best is to keep faith with persistence and realize the existence of the unseen marvels.