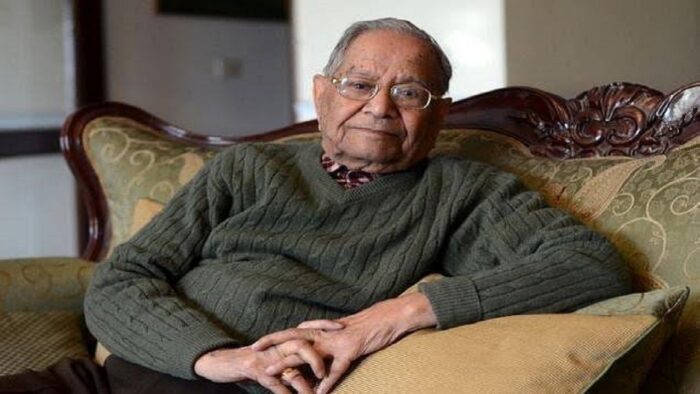 Mahahopadhyaya Prof. Braj Basi Lal, the centenarian archaeologist noted for an outstanding career spanning over five decades in his field, passed away on September 10, 2022 at the age of 101. An author of about 50 books and over 150 research papers, Prof. Lal is undoubtedly the most revered archaeologist of the 20th century for his distinguished works that have been instrumental in reconstruction of the history of India which is rather distorted. He not only advocated the antiquity of the Bharatiya culture but also believed in its unbroken continuity till date, which is amply reflected in his works.

Born in 1921 at Jhansi, Prof. Lal began his career in archaeology in 1943 as a trainee under the supervision of renowned British archaeologist Mortimer Wheeler at Taxila. He extensively worked at sites connected with the Indus-valley civilization such as Kalibangan, which led him to postulate the unprecedented idea of the spatial and chronological oneness of the Harappan and the Vedic cultures. Prof. Lal had rejected the Aryan Invasion Theory and posited the indigenousness of the Rigvedic people.  ‘The Saraswati flows on: the continuity of Indian culture’, The Rigvedic People: ‘Invaders’? ‘Immigrants’? or Indigenous?’,  ‘The homeland of the Aryans : Evidence of Rigvedic flora & fauna and archaeology ‘  are some of his well known seminal works on this subject.

Prof. Lal served as the Director General of the Archaeological Survey of India (ASI) from 1968 to 1972. At the age of 51 he took voluntary retirement from the ASI to pursue his independent research programmes. He served as a Professor at the Jiwaji University, Gwalior and later as the Director of the Indian Institute of Advanced Studies, Shimla.

The nation also owes to Prof. Lal for his extensive works at sites connected with great Indian epics such as Hastinapura, Indraprastha, Ayodhya, Chitrakoot, Nandigram, Bharadwaja Ashrama and Sringaverapura. The findings at these sites, further corroborated by literary sources, adequately establish the historicity of the Ramayana and the Mahabharata. ‘Historicity of the Mahābhārata: Evidence of Literature, Art, and Archaeology’ , ‘Rama : His Historicity, Mandir and Setu’ and Testing Ancient Indian Traditions (On The Touchstone of Archaeology) deal with this subject in great detail. As an archaeologist of international repute, Prof. Lal also conducted excavations at Egypt, which also threw light on the Egyptian prehistory.

Prof. Lal is also remembered for his monumental contribution to the Sri Rama Janmabhoomi case. In 1990, based on his findings during the excavation at the site of birthplace of Sri Rama, he wrote on the ‘Pillar-base-theory’. Prof. Lal deduced that the twelve stone pillars at the pier of the Babri Masjid, with typical Hindu motifs and figures of Hindu deities were not an integral part of Masjid, but foreign to it. This served as a major boost to the case as it was one of the earliest archaeological evidences of the pre-existence of a Hindu temple at the disputed site.

In recognition of his pioneering work, he was awarded the prestigious title of Mahamahopadhyaya by Nava Nalanda Mahavihara in 1979. The Government of India conferred upon him the Padmabhushan in the year 2000 and again, the second highest civilian honour of Padma Vibhushan in his hundredth year in 2021 for his distinguished contributions in the field of archaeology. The B B Lal Chair was instituted in his honour at IIT Kanpur for faculty members who have worked on science and technology related to archaeological work.

Although his demise leaves behind an irreplaceable void in the sphere of Indian history, Prof. Lal has left behind for Indic scholars an inexhaustible armoury in the form of his seminal works in countering the malicious narratives of Western Indologists and leftist historians.  ‘Testing Ancient Indian Traditions (On The Touchstone of Archaeology)’, ‘New Light on the “dark Age” of Indian History: Recent Excavations at the Hastinapura Site, Near Delhi’, ‘Has the Indus Script Been Deciphered?’, ‘Scientific Examination of Works of Art and History’, ‘India 1947-1997: New Light on the Indus Civilization’ and ‘How Deep Are the Roots of Indian Civilization?: Archaeology Answers’, to name a few, are some of the must-reads for students of history and culture.

Dr. Sriram Narainswamy Iyer is an artist & Sanskritist based in Mumbai. Born into a family of artistes, he is a Bharatanatyam choreographer and CarnaticRead more