Who’s Responsible For Our Pains And Gains? 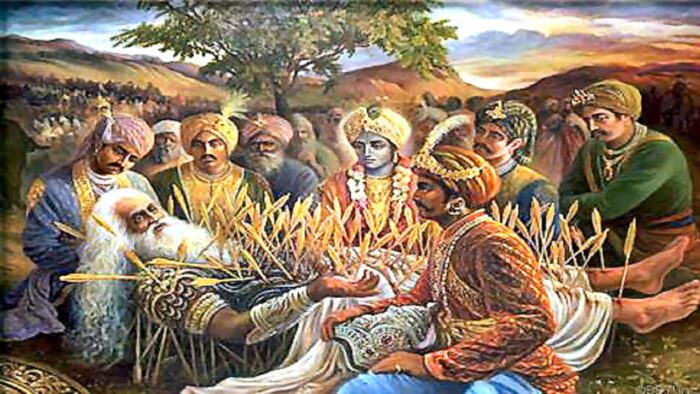 For everything good or bad in life we often try to place blame elsewhere. We seek refuge or blame our opponents, destiny, and stars and even gods, deities. So, what’s, or who’s, responsible for all that’s happening in our life? This is an important question and let us try to answer it from a Vedic perspective.

After the Great War at Kurukshetra, even after being victorious, King Yudhishthira was filled with remorse and pain instead of a sense of accomplishment. His mind was bereft of peace.

To find some relief he approaches the ailing patriarch of Kuru dynasty Bhishma, who laid on the battlefield, his body pieced with dozens of arrows from the bow of Arjuna, waiting for his time to be delivered from the pains of his body to Moksha, and said: “Pitamah, I think the sons of Dhritarashtra are fortunate, unlike me, for they do not live to see you in this state. But I, the cause of your death as well as that of my friends, am denied all peace of mind by beholding you on the bare earth in this sorry condition. That wicked Duryodhana, the most infamous of his race, has with all his troops and his brothers, perished in battle observing the Kshatriya–Dharma. He does not see you in this sorry state. Verily, for this reason, I feel death to be preferable to life. As a principled person, who has never severed from the path of virtue, had I with my brothers met with destruction in this at the hands of our enemies on the battlefield, I would not have found you in this pitiful plight. Surely, the maker has created me to become perpetrators of evil deeds. O grandsire, if you wish me good, console me in a way that I may find peace within.”

To this Bhishma, holding no grudge or remorse for his pitiful state, narrated an ancient tale that recorded a conversation between Gautami, Arjunaka – a fowler, Mrityu (Death) and Kala (Time).

There was once a wise lady named Gautami, blessed with peace and tranquillity of mind. One fateful day she found her son dead in consequence of having been bitten by a serpent. An angry fowler, by name Arjunaka, found the serpent and bound it with a string and brought it before Gautami and asked “This infamous destroyer of a child does not deserve to live longer. Shall I throw it into the fire or shall I hack it into pieces?”

To this Gautami replied “Arjunaka, release this serpent as it does not deserve death at your hands. By killing this serpent, my boy will not be restored to life, and by letting it live, no harm will be caused to you.”

But the fowler, unconvinced, retorted “These words, which you have spoken don’t behove a person, who is plunged in sorrow. Those who value peace of mind, assign everything to the course of Time as the cause, but practical men take to revenge. People through fear of losing a place in heaven shun revenge. Therefore, relieve your grief and order me to kill this serpent.”

Gautami replied “People like us are never afflicted by fear. Good men have their souls always intent on virtue. The death of my son was predestined: therefore, I don’t approve killing this serpent. Wise do not harbour resentment, because resentment leads to all kinds of pain. I earnestly request that you forgive and release this serpent on grounds of compassion.”

The wise Gautami, although repeatedly incited by the fowler to let him kill the serpent did not bend her mind. The serpent, in severe pain, then uttered in human voice. “O Arjunaka, what fault is there of mine? I have no will of my own, and am not independent. Mrityu (Death) sent me on this errand. By his direction, I have bitten this child, and not out of any anger or choice on my part. Therefore, if there be any sin in this, O fowler, then it is of Mrityu.”

The fowler, untouched by the serpent’s argument, replied “If you have done this evil, led thereto another, the sin is yours also, as you are an instrument in this act. As in the making of an earthen vessel the potter’s wheel and rod and other things are all regarded as causes, so are you. He, who is guilty, deserves death at my hands. You are guilty. Indeed, you confessed yourself this in this matter!”

Even after presenting several arguments, the serpent failed to impress the fowler. Fowler could not accept that Mrityu was the cause of death and not the serpent.

Eventually, the Mrityu (Death) himself appeared on the scene and said “Guided by Kala (Time), I, O serpent, sent you on this errand, and neither are you nor am I the reason of this child’s death. All creatures, mobile and immobile, in heaven, or earth, are influenced by Kala. The whole universe, O serpent, is imbued with this same influence of Kala. Knowing this O serpent, do you still consider me to be guilty? If any fault attaches to me in this, you also would be to blame.”

The serpent responded thus “I do not, O Mrityu, blame you, nor do I absolve you of all blame. I only suggested that I am directed and influenced in my actions by you. If any blame attaches to Kala, or, if it be not desirable to attach any blame to him, it is not for me to scan the fault. We have no right to do so. As it is incumbent on me to absolve myself from this blame, so it is my duty to see that no blame attaches to Mrityu.”

Then the serpent, addressing Arjunaka, said “You have listened to what Mrityu has said. Therefore, it is not proper for you to torment me, who is guiltless, by tying me with this chord.”

The fowler said “I have listened to you, O serpent, as well as to the words of Mrityu, but these, O serpent, do not absolve you from all blame. Mrityu and you are the causes of this child’s death. Accursed be the wicked and vengeful Mrityu, who causes affliction to the good.”

Mrityu argued “As already said, we both are not free agents, but are dependents on Kala (Time), and ordained to do our appointed work. You should not find fault with us, if you do consider this matter thoroughly.”

Fowler was still unconvinced. And then Kala (Time) arrived at the scene of disputation on this point of morality and spoke thus to the serpent and Mrityu, “Neither Mrityu, nor this serpent, no I, O fowler, are guilty of the death of any creature. We are merely the immediate existing causes of the event. O Arjunaka, the Karma of this child formed the existing cause of our action in this matter. There was no other cause by which this child came by its death. It was killed because of its own Prarabdha (past Karma). His Karma has been the cause of its destruction. We are all subject to influence of our respective Karma. Karma is an aid to salvation even as sons are, and Karma also is an indicator of virtue and vice in man. We urge one another even as acts urge one another. As men make from a lump of clay whatever they wish to make, even so do men attain to various results determined by their own Karma. As light and shadow are related to each other, so are men related to Karma through their own actions. Therefore, neither are you, nor am I, nor Mrityu, nor the serpent, nor this Gautami is the cause of this child’s death.”

Gautami, who was a quiet witness to the conversation intervened and said to Arjunaka in a consoling tone “Neither Kala, nor Mrityu, nor the serpent, is the cause in this matter. My son has met with death as the result of his own Karma. I too so acted in the past that my son has died as its consequence. Let Kala and Mrityu retire now from this place, and you too do the same after releasing the serpent.”

Interestingly, the essence of this story is the essence of all Vedic scriptures, including Vedas, Upanishads, Aranyakas, Shatakas and Bhagavad Gita. Yet many adherents of Hindu religion waste much time blaming destiny, stars and even gods for their pains and gains. We are ourselves responsible.

In Bhagavad-Gita, Sri Krishna very clearly states that the fate or destiny of individuals is determined as per his/her own Karma in the past. Destiny or fate is therefore called Prarabdha Karma (accumulated Karma). If you’ve done something good; a good is surely on the way; the same is vice versa. Since, we aren’t sure of our deeds in our past as well as past lives – it’s best to perform Nishkaama Karma or acts without attachments and find pleasure in doing them. Therefore, be assured for all that is good, middling or bad, you’ve, but yourself to blame – stop seeking solutions in soothsayers. These – like opium – can only offer you temporary relief. The eternal relief is in finding peace while doing good job and peace in comfort that you’ve did it well. 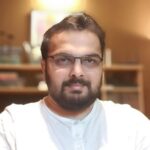 U. Mahesh Prabhu is an author, founder, management, and political consultant.