Where there is Dharma, there is Victory 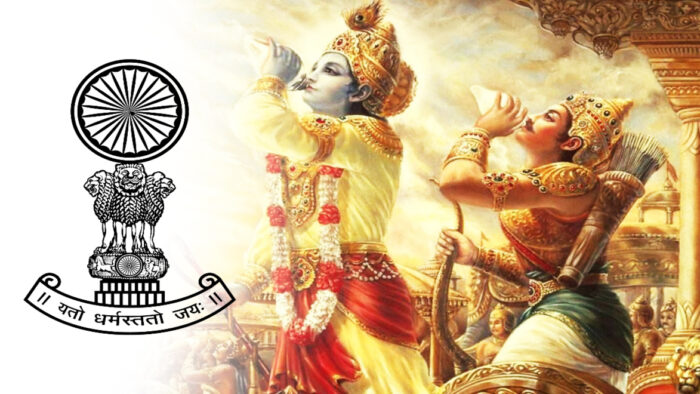 The emblem of the Supreme Court of India is “yato dharmas tato jayaḥ”, which is translated as “where there is dharma, there is victory”. These words are taken from the Mahabharata.

When asked to identify the person who speaks these words, most people would answer that it was Gandhari who responded thus when her son Duryodhana came to her before the Kurukshetra war to get her blessings for victory.

Gandhari did not bless her son with victory; she instead told him that victory would be where there was dharma. While Gandhari did say these words, they are uttered not once, but thirteen times in the Mahabharata, if we take the Critical Edition of the Mahabharata as our reference.

Some other factoids that should interest people, as they did me.

Finally, these words occur once each in the Drona, Shalya, and Anushasan Parvas, twice in the Stri Parva, thrice in the Udyoga Parva, and five times in the Bhishma Parva.

Let’s dig into the thirteen occurrences, in the order they appear in the Mahabharata.

Translation: ‘Dhritarashtra said, “All that you have said has been approved of by the wise and is for my welfare. But I cannot abandon my son. Where there is dharma, there is victory.”

The very first instance of these words is found in Vidura Niti. After Sanjaya had returned from his mission to Upapalavya, he came to Dhritarashtra and told him that while he would tell in front of the whole assembly what Yudhishthira had told him, he believed the king was guilty of rejecting the worthy and accepting the unworthy.

This left the king in a state of distress. He called for Vidura, who launched into a long discourse on dharma in an attempt to calm the king down as well as make him see the wisdom of doing what was right.

Dhritarashtra accepted Vidura words, but would not take his advice, lamenting and bemoaning the primacy of fate and likening the fate of man no different from a puppet dangling from a string.

Translation: “That tiger among men held a club in his hand and seemed to be eyeing the earth. This clearly shows that he will kill us in a great battle. O Hrishikesha! I know that where dharma exists, victory exists there.”

Krishna tried to draw Karna away from the Kouravas by revealing to him who he truly was – the eldest Pandava, the first-born son of Kunti, the son of the Sun god, a kshatriya.

While Karna stayed loyal to Duryodhana, he also acknowledged the coming defeat and destruction of the Kouravas. He described a dream he had had, where he saw omens portending defeat, and where he saw the Pandavas. In this shloka, he describes Vrikodora – Bhima.

Translation: “‘The one with the white horses is the same to me as Ashvatthama. What is the need to speak a lot? Where there is dharma, victory is there.’”

Krishna returned unsuccessful from his mission to Hastinapura to avert war. When asked by Yudhishthira, he told what had transpired. In the assembly hall where the kings and Kouravas had assembled, after Bhishma had spoken, Drona had addressed Duryodhana, to get him to agree and hand over the Pandavas’ kingdom back to them.

Translation: “‘Do not sorrow. This was destined a long time ago. Therefore, you should not sorrow. It could not have been averted. Where dharma exists, victory is there.”’

With war imminent and inevitable, Vyasa came to Dhritarashtra and offered to give him sight so he could witness what would happen on the battlefield, where Dhritrarashtra’s sons would kill and get killed. Dhritarashtra refused. Vyasa then granted divine sight to Sanjaya such that nothing on the battlefield would remain hidden from him, no thought unrevealed.

Translation: “One must give up adharma, avarice and delusion and resort to endeavour. One must fight without pride. Where there is dharma, there will be victory”

Before the war had begun, before Arjuna had been overcome by a deep sorrow at the prospect of the destruction of his loved ones and let go of his bow, he had comforted his eldest brother, Yudhishthira, who had grown worried at the prospect of facing the mighty Kourava army – where there was dharma, there was victory.

Translation: “Resorting to dharma, those immensely strong ones have never retreated from a fight. They have obtained supreme prosperity. Where there is dharma, victory exists there.”

Bhishma had not yet fallen. Dhritarashtra was however distressed. He lamented, yet again, about the invincibility of the Pandavas and the seeming imminent destruction of his sons. He wondered whether the Pandavas possessed some boons or some knowledge.

With nine days having passed in the war, and despite the presence of maharathis on their side, Duryodhana still found the Kouravas unable to get the best of the Kounteyas. When he posed this conundrum to Bhishma, the commander of the Kourava army spoke of the greatness of Vasudeva Krishna.

Thus, for the first time in the Mahabharata, we are told of the explicit connection of dharma with Krishna. Dharma and Krishna were inseparable. There is a slight variation of this line that is spoken by Drona earlier, but that is a topic for another post.

Translation: “I tried for a very long time to bring about peace. But I was not successful. Where there is dharma, victory will be there.”

Bhishma fell on the tenth day of battle, brought down by his favourite grandson, Arjuna. In this, the last chapter of Bhishma Parva, Karna came to meet Bhishma and asked his permission to enter the battlefield.

Bhishma told Karna why he had been harsh in his demeanour towards him – he knew that Karna was a Kounteya, which he said he had learned from Krishna, Vedvyasa, and Narada. Karna nonetheless wanted to do battle.

Bhishma gave him his blessings, and ended with these words – where there is dharma, there is victory. The same words that Karna had spoken to Krishna.

Translation: “O Pandava! Always practise non-violence, austerities, generosity, forgiveness and truth with supreme cheerfulness. Where there is dharma, victory exists there.’ Having said this to Pandava, Vyasa disappeared from the spot.”

Ghatotkacha had been killed by Karna, using Indra’s Shakti weapon, after which it returned to Indra. The one weapon against whom Arjuna would have been powerless to resist and Krishna helpless to save Arjuna from was now no longer a threat. The Pandava army rejoiced, the Kauravas despaired.

Yudhishthira was however enraged by Karna’s killing of Ghatotkacha and resolved to kill him. Krishna didn’t think it was such a good idea and advised Arjuna that they follow the king.

Vyasa also appeared on the battlefield and advised Yudhishthira to desist from his endeavor, and instead let the war run its course, which, he said, had less than five days to go.

Translation: “Duryodhana desired victory and you spoke harsh words to him. ‘O foolish one! Listen to my words. Victory exists where there is dharma.’”

The war was over. Only Ashwatthama’s last recourse remained, which Krishna was aware of. The Pandavas dreaded going in front of Gandhari, whose anger they feared, knowing it would be implacable on account of the deaths of her sons in the war.

Yudhishthira beseeched Madhusudana to go ahead and pacify her anger. Madhava acceded and left for Hastinapura, where he first counselled Dhritarashtra and then Gandhari. He reminded her of her own words to Duryodhana – where there was dharma, there was victory.

Now that her own words had come true, Krishna urged Gandhari to give up anger towards the Pandavas.

Translation: “Desiring victory, he repeatedly beseeched you. O Gandhari! You said, ‘Where there is dharma, there is victory.’”

The Pandavas, having met Dhritarashtra, took the blind king’s leave and went to Gandhari. Though Krishna had counselled Gandhari, Vedvyasa knew that rage still raged inside Gandhari and that she could still pronounce a curse on Yudhishthira.

He arrived and reminded Gandhari of her own words when Duryodhana had repeatedly asked her to bless him with victory – “You said, ‘Where there is dharma, there is victory.’” It may also be worth pointing out that Vyasa did not proscribe here from pronouncing a curse.

He said that this was not the time for cursing. Ponder the implications of what Vyasa said, for what he said came to pass.

Translation: “O tiger among men! Knowing everything about the catastrophe that he had brought on himself, I told him, ‘Where there is dharma, victory exists there.”

The war was now truly over. Duryodhana had been killed, Ashwatthama had wreaked a terrible revenge upon the sleeping warriors at night and been cursed in return. The Pandavas first went to Dhritarashtra, and then to Gandhari.

All then proceeded to the battlefield, where Gandhari came by the corpse of her eldest son, Duryodhana. Weeping and grieving, she addressed Krishna, recalling that Duryodhana had come to her before the war, seeking her blessings for victory.

She had, however, did not bless Duryodhana. She knew her words well enough, having told Duryodhana and then having heard those words from Vyasa.

Translation: “I said this to the wicked and evil-minded Duryodhana. ‘Wherever Krishna exists, dharma is there. Wherever dharma exists, victory is there.”

The last time we find these words in the Mahabharata are said, fittingly, by Bhishma to Krishna. Fifty-eight nights had passed since Bhishma had fallen, the month of Magha had arrived, Yudhishthira knew that Uttarayana had begun, and the time for Bhishma’s departure had arrived.

Thus, when the Pandavas set out to where Bhishma lay, they carried with them fires for kindling Bhishma, ghee, sandalwood, fragrances, and other materials.

Krishna gave his approval and told Bhishma that he would become a Vasu again.

Thus Bhishma gave up his life-breath, ascended heaven, thus completing one cycle of karma that had begun with the theft of a cow.