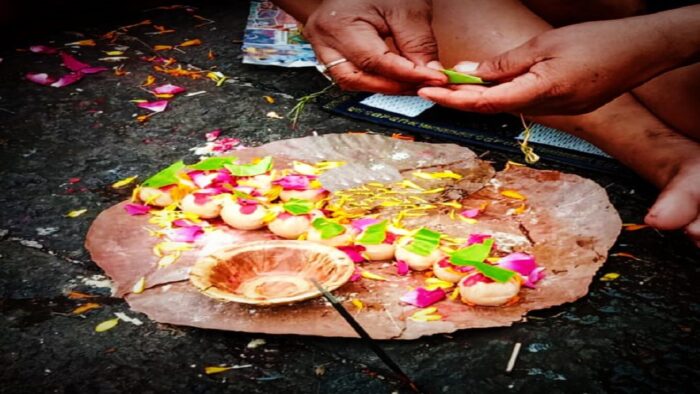 Hindu scriptures speak of eighty four lakh classes of beings (yonis). Of these, humans alone are said to reach the city of Yama with their subtle bodies after death, wherein they are either rewarded or chastised according to their karmā. The reward is in the form of a higher birth like a human-being or a God, whereas, the chastisement implies being born as animals, insects, etc. This cycle of birth and death continues until the jīvātmā attains mokṣa.

The scriptures therefore enjoin upon the man certain obligatory duties or śrāddhas for the delectation of his departed ancestors, to whom he is inherently indebted. This debt is said to be repaid by begetting sons, who would in turn continue the performance of the śrāddha to his ancestors in their afterlives. The worship of the ancestors is recognized as one of the Pañca-mahāyajñas or five daily sacrifices to be performed by the twice-born. The importance of the performance of the rites towards one’s ancestors or Pitṛs is unequivocally stated in the Taittirīyopaniṣad as – “देवपितृकार्याभ्यां न प्रमदितव्यम्‌”, wherein the rites towards one’s ancestors are placed on the same pedestal as the worship of deities.

The term śrāddha generally is explained as “श्रद्धया पितॄनुद्दिश्य विधिना क्रियते यत्कर्म तच्छाद्धम्” i.e. “A rite that is performed faithfully, in accordance with the scriptures for the delectation of the Pitṛs”.

Parāśara gives a more elaborate explanation of the term as –

A similar explanation is given in the Kūrma-Purāṇa–

Śrāddha and its rationale

The jīvātmā transmigrating in its subtle body, is known as preta. The preta, becomes Pitṛ after the sapiṇdikaraṇa rite and thereafter he enters the Pitṛloka. Although the scriptures do not explicitly mention about the duration of the jīvātmā’s stay in the Pitṛloka, they declare that the Vasu, Rudra & Adityas, the Devas who are invoked in the śraddha are responsible for distributing the offerings to the Pitṛs abiding the Pitṛloka or Devaloka or whichever world they are reborn in.

Even if the soul is reborn, by the utterance of the name and the gotra of the deceased with the appropriate mantras and the faith of the performer, the offerings reach the departed soul as his food in whichever world he abides. For example, if the deceased is reborn as a God, the offerings reach him in the form of amṛta, if born as human, then as food, if a serpent, then as wind[1]. The Purāṇas resort to the analogy of a calf identifying its mother in a cattle-shed amidst several cows to illustrate the efficacy of the mantras in reaching the oblation offered by one to his forefathers[2]. The Devas are responsible for the offerings to reach the soul in whichever world he is. They also reward the performer for having appeased his forefathers.

The Purāṇas and the Dharma-śāstras classify the śrāddhas into numerous categories based on their nature. The principal types are the Ekoddiṣṭa (performed with only one piṇda to propitiate a single departed soul), Sapiṇdikaraṇa (performed on the twelfth day of a person’s death to unite the departed soul with his ancestors), Vṛddhi or Nāndīmukha (performed before auspicious occasions such as marriages etc., wherein the forefathers upto  three generations extending beyond the great-grandfather are propitiated) and Pārvaṇa (offering three piṇdas to the father, the grandfather and the great-grandfather and invoking the Viśvedevas). Of these the Pārvaṇa-śrāddha involves the worship of the Viśvedevas and the Pitṛs, the pāṇihoma (offering rice in the right hand of the Brāhmaṇa representing the Pitṛs), brāhmaṇa-bhojana and piṇda-pradāna.

As regards the time of performing the śrāddha, texts on rituals enlist as many as ninety six occasions for performing śrāddha such as the twelve Amāvāsyas, the days commemorating the commencement of eons (yugādis), the days commemorating the commencement of Manvantaras, the twelve Sankrāntis (Solar transit), the fifteen days of Mahālayapakṣa, eclipses etc[3],. to name a few, apart from the death anniversary (as per the pañcāṅga). Out of these, one is expected to perform śrāddha at least on two occasions viz, the death anniversary and during the Mahālaya-pakṣa.

The fifth fortnight after the month of Āṣādha i.e. the dark fortnight (Kṛṣṇa-pakṣa) of the lunar month of Bhādrapada is known as the Mahālaya-pakṣa or the Pitṛ-pakṣa. This generally coincides with the solar month of Kanyā. Also known as Gaja-cchāyā, it is considered to be the most significant time for the performance of Śrāddha. The Smṛti-muktāphala quotes an ancient authority according to which this is the period when the distressed forefathers long for food and water[4]. The Skanda-Purāṇa asserts that the performance of the śrāddha during the Mahālaya on the tithi of demise of the deceased, bestows upon one, the fruit of performing śrāddha throughout the year[5]. The Prajāpati-Smṛti states that a śrāddha performed during the Mahālaya bestows the most excellent fruits[6]. It is also stated in numerous Purāṇas that the Pitṛs leave the Pitṛloka and descend upon the earth to accept the oblations offered by their descendants and return to their abode on the day of Dīpāvalī[7]. The dark fortnight of the Bhādrapada is known as Mahālaya, since it is regarded as the bode (ālaya) of festivities (maha) as far as the Pitṛs are concerned. The Brahmāṇda and Mārkaṇdeya Purāṇa prescribe the performance of Pārvaṇa Śrāddha during the fifteen days from the entry of the Sun in the Virgo[8]. Hemādri recommends the performance of śrāddha during the fifteen days from the Pañcamī of the bright fortnight of Āśvina till the Pañcamī of the dark fortnight, when the Sun is situated in Virgo, as an alternative period for the performance of the śrāddha, if one is unable to perform the śrāddha during Mahālaya[9]. The Bhaviṣya-Purāṇa mentions Dīpavalī as yet another alternative[10]. However, all texts unanimously mention that the non-performance of śrāddha before the return of the Pitṛs to their realm i.e., the commencement of the solar month of Scorpio (Vṛścika) leads to the displeasure of the Pitṛs and one incurs their curse[11].

The Brahma-Purāṇa refers to the Mahālaya-pakṣa as the best period to perform Kāmya-śrāddhas i.e. śrāddhas performed to attain specific desires. The Purāṇa enlists the results of performing śrāddha on each tithi of Mahālaya as:

Ekādaśī for mastery over the Vedas; Dvādaśī for victory; Trayodaśī for progeny, cattle, wisdom, freedom, long-life etc., Caturdaśī for the redemption of those who have died untimely and unnaturally and Amāvāsyā for attaining all desires and ascending the svarga[14].

While the performance of Śrāddha to one’s direct ancestors is enjoined, the scriptures, true to the altruistic nature of Sanātana dharma, also sanction the performance of śrāddha to practically all relatives, one’s Guru, disciples and friends[16].  While the concept of śrāddha is generally understood to be an expression of one’s gratitude to the ancestors and their appeasement, the Purāṇas suggest  the idea of universal well-being, the substratum of Hindu practices as rituals being achieved through śrāddhas. The Brahma-Purāṇas says:

[He who duly performs śrāddha according to his resources appeases all, right from Brahmā to the twig. He delights Brahma, Rudra, Aśvinas, Agni, Vāyu, Viśvedevas, the animals, the reptiles and others].

Dr. Sriram Narainswamy Iyer is an artist & Sanskritist based in Mumbai. Born into a family of artistes, he is a Bharatanatyam choreographer and CarnaticRead more