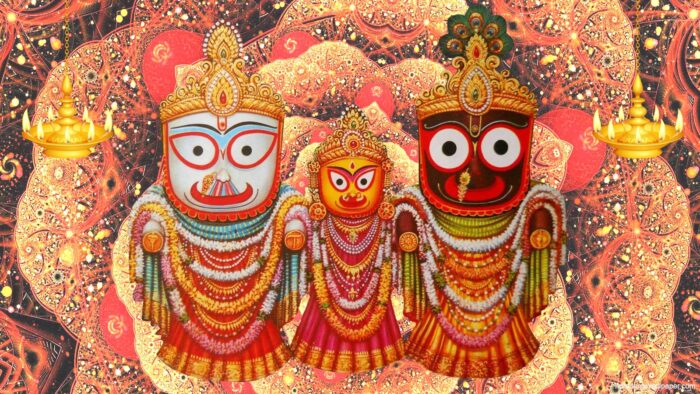 Shri Jagannath is Swayambhu- self-manifested. He is the self-created and self-existing Divine withholding the vastness of the Universe within the ceaseless self.

Defining and redefining the past in the present times, with epochs behind and eras lined up for the future, Shri Jagannath, the Divine Master of the Universe lives his human-like life.

The cycle of his presence moves on with every passing and coming generation, whispering into humankind His eternal presence then and now.

The ancient practices in the Shri Jagannath temple at Puri continue to be performed with utmost sanctity following the old ritualistic norms. The Gods are worshipped following daily Nitis and the festive rituals. Shri Jagannath adorns several Veshas/ Beshas annually at the Moola Peetha at Puri. Besha in the Odia vernacular refers to the costume.

These Beshas involve different garments the Gods wear, the hair and headgear styling, suitable accessories for each specific attire, and most importantly a reason that validates the specific styling.

The Gods are primarily dressed up by the combination of  – Bastra Singhar– Garment dressing, Puspa Singhar- Flower dressing, and Alankar Singhar– Jewellery dressing. The final output is a magnificent Besha of the Divine siblings, creating an exclusive fashion statement of the Divine Triad.

The month of Kartika falls under the Dakshinayana period, when the Sun travels from North to South moving from Karka – Cancer to Makara –Capricorn and is considered the most auspicious time for prayers to Shri Vishnu and Goddess Lakshmi.

In Jagannath sanskruti Shri Balabhadra is considered Maheswara- Shiva, Sri Jagannath -Vishnu, and Subhadra- Brahma. Together the triad represents Brahma, Vishnu, and Maheshwara at the Srimandira along with Shri Sudarshan. 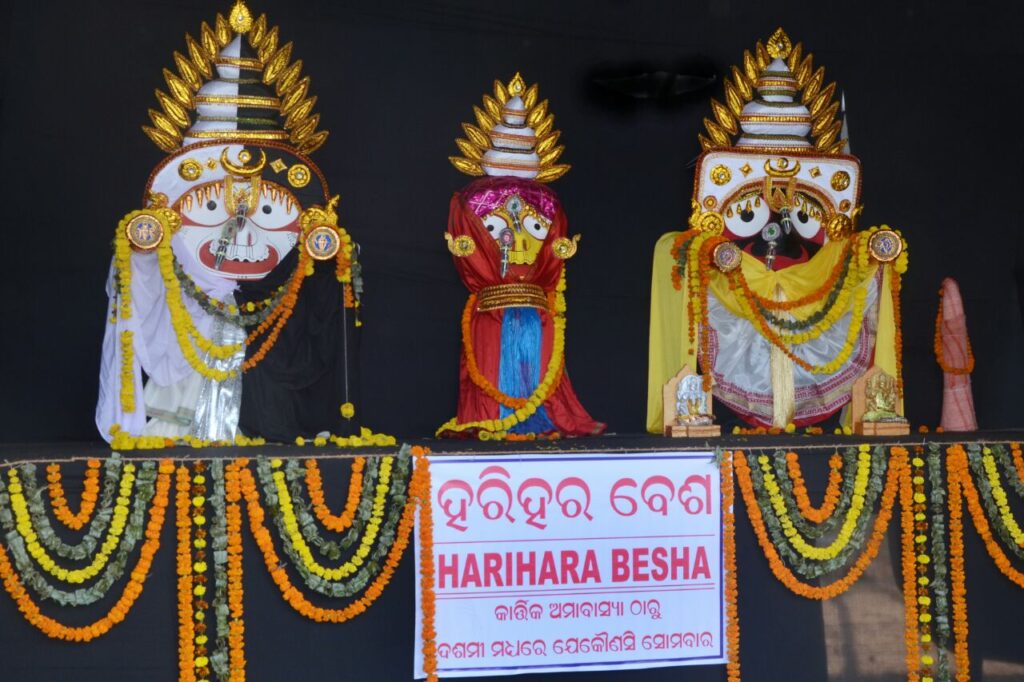 Meaning: The supreme God of Rudra or Shiva is Vishnu and the supreme Lord of Vishnu is Shiva. The same Lord is moving in the world always in two forms.

On Mondays of Kartika, one half of Lord Balabhadra is dressed in white and the other half is dressed in black. The fair half represents Shiva as Hara and the darker half symbolizes Vishnu as Hari. Their union creates the amalgamated Deity- Harihara. 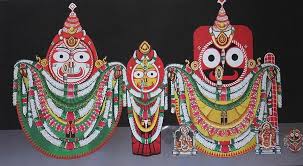 Meaning: O tongue, drink only this nectar of the names – Shri Krishna, dear most of Shrimati Radharani, Lord of Gokula, Gopala, Lord of Govardhana, Vishnu, Govinda, Damodara, and Madhava.

Post the twenty-five days of the audience with His beloved Radha as Radha Damodara, Shri Narayana is seen with His consort Goddess Lakshmi. On the day of Kartika Sukla Pakshya Ekadashi, that is the twenty-sixth day of the month, the Deities adorn a new costume- Lakshmi Narayana Besha.

This look is also popularly known as the Thia Kia Besha. In the Odia vernacular Thia means standing and Kia refers to kewda flowers. In this Besha the headgear of the Holy Trinity is decorated with a string of gold crafted Kia- Kewda or fragrant screw pine petals. 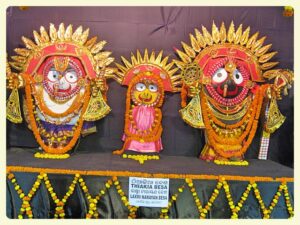 Each gold crafted screw pine petal is 8 inches long and tucked into the tiara of the Gods, giving a unique look. Thus the name Thia Kia Besha.  Shri Jagannath is dressed up elaborately to give an audience to His devotees along with His dear wife Shri Lakshmi. The month of Kartika is dedicated to the worship of Shri Lakshmi and Shri Narayana.

Meaning: O Supreme pair, you are the basic axis of the world, sitting on the tortoise which leads to endless pleasures and are positioned on a lotus which has the main petal. This main petails like the goad over the pericarp of the lotus sitting on it like Mount Meru. They who wear gem-studded crowns with shining ear globes, I always meditate on Lakshmi and Narayana who is peaceful.

It is done on Karttika Sukla Dwadasi Tithi, the 12th day of the bright fortnight in Karttika. As per legend when Akura was sent by Kansa to Gopapuri to bring Krishna to Mathura, he had seen Shri Krishna dressed in the Bankachuda attire. 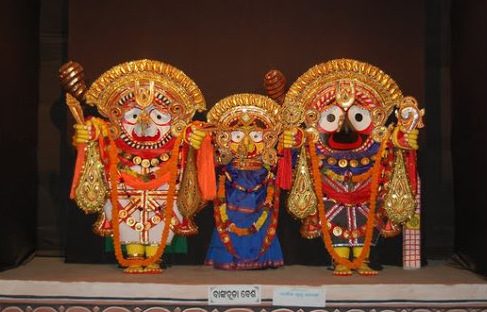 The most attractive part of this attire is the beautiful golden crown adorned by the Triad.

On Kartika Sukla Trayodasi, the 13th day of the bright fortnight in Kartika. Shri Jagannath along with His siblings is dressed in the Adakia Besha or Tribikram Besha.

As mentioned in the Rigveda Shri Jagannath an incarnation of Shri Vishnu appears as Bamana- Dwarf and takes three steps. These three small steps make Him the ruler of the Universe. He becomes the Tribikrama having control over the Swarga– Heaven; Narka– Hell and Pruthvi– Earth. 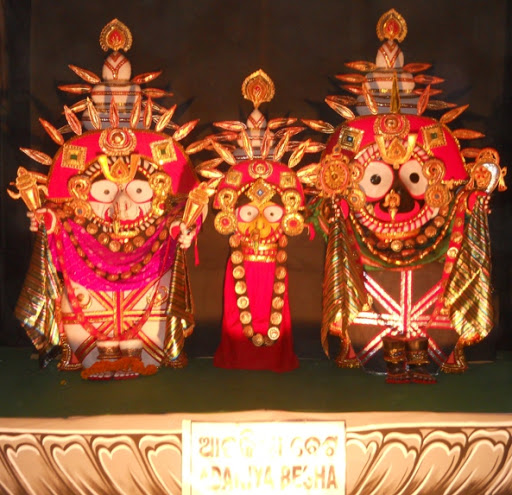 Meaning: Through all this world strode Viṣhṇu; thrice his foot he planted, and the whole the universe was gathered in his footstep’s dust. Viṣhṇu, the Guardian, He whom none deceive, made three steps; henceforth establishing his high decrees.

The attire adds a gallant statement to the Lord who is adorned with a gold sword, conch shell, wheel, and club. The head is decorated with a gold crown with  Kia -Kewra or screw pine flower petals.

This Besha is done on Kartika Sukla Chaturdasi tithi, the 14th day of the bright fortnight of Kartika also known as Baikuntha Chaturdashi. 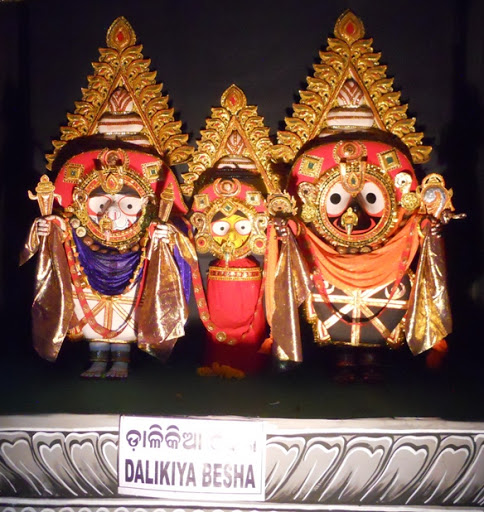 It is believed that an audience of the Lord in the Lakshmi Nursingha Besha allows the devotee a place in Baikuntha. This Besha is also called the DaliKia Bhesa.

The final Besha of the Kartika masa, the Raja Rajeswara Besha takes place on Kartika Purnima Tithi, the full moon day of Kartika masa. The Gods are masked in gold and decorated with twenty-three types of gold ornaments and much more. 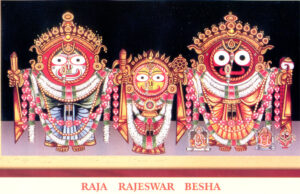 The grand Raja Rajewar Besha is the last Besha in the Holy month of Kartika and marks the end of the month.

The Nagarjuna  Besha is done in those years in which the month of Kartika has six days of Panchaka (five days) instead of the regular five days. The Panchaka marks the end of the Kartika month and concludes on the day of Kartika Purnima. The Holy Trinity gets attired in the Naga fighter costume that coincides to the rare planetary positions making the Nagarjuna Besha or the Bira Besha an extraordinary spectacle.

The valiant costume of the Lord is colourful and majestic. Festooned with sixteen types of weaponry and dressed in deer and tiger skin, decorated with feathers, the costume has the simplicity of the Naga Sadhus and the valour of warriors at warfare.

During this Besha Sri Jagannath and Balabhadra sport long beard and moustache, similar to the Naga Sanyasis. 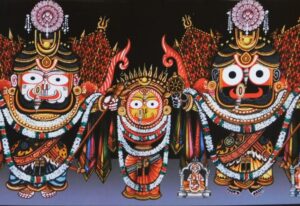 He is Purushotamma, the highest Purusha, an incarnation of Yajnapurusha –Shri Vishnu. The Sun and Moon as His eyes, the Earth as His feet, the sky as His head and the trees remain as His corporal capsule in which He exists as the eternal being.

At the Srimandira in Puri He is present with His siblings, leading a human-like life; manifesting in different incarnation; consuming a huge gastronomic platter; dressing up magnificently in the finest attires; performing diverse Leelas and in the process keeping His devotees engrossed and engaged with Him.

Note: This year due to the prevailing Covid-19 pandemic situation, none of the Beshas done in the Kartika Masa at the Moola Peetha of Shri Jagannath at  Puri Dham were made available for public viewing. All the rituals were/ are being conducted without the participation of devotees.