Mahabharata Metaphors: The Divinity of Sage Shuka – Part I 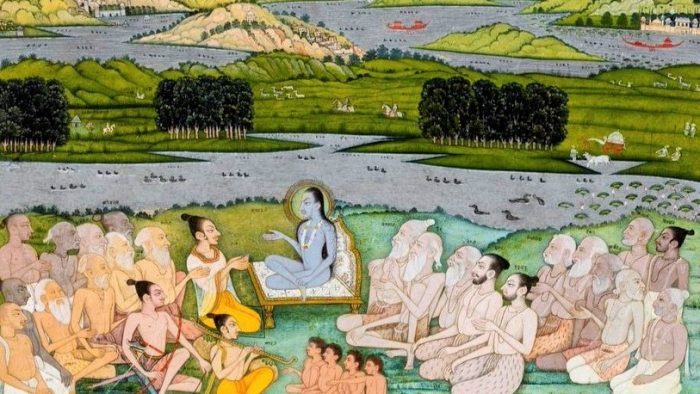 Sage Shuka, son of Sage Vyasa, is an important person in Mahabharata. It is Shuka who narrates Srimad Bhagavata to King Pareekshit – who was in anticipation of his end from Takshaka. Shuka is among the only five to learn everything under the lotus feet of Sage Vyasa. He is known in the tradition as the greatest of men with Vairagya-bhaava seeking to attain Moksha. His birth, his short life, and his eventual attaining of Moksha is a fascinating story in Mahabharata that elevates one to look at life with divine dispassion. The story of Shuka is narrated to Yudhishthira in Mahabharata by none other than Bheeshmacharya himself, in that great Parva – the Shanti Parva. His story contains immense insight into the notion of Moksha in our tradition as well as the traits and path of a person seeking Moksha.

Once, Bhagavan Shankara was on his usual vihara on the Meru Parvata, surrounded by the bhoota-gana and in the company of this Goddess Uma, the daughter of Himavanta. At the same time, Sage Krishna Dvaipaayana – the great Vyasa, was performing his penance with the sankalpa of receiving a son. He sought a son who was as courageous as ‘Agni, Bhoomi, Jala, Vaayu, and Akasha’. On that Meru Parvata, there were Saadhyas, Oceans, Rivers, the Ashwinis, Marutta-s, and others performing their penance and pleasing Mahadeva to realize what they sought. In the end, Maheshwara decided to bestow Vyaasa with the boon he sought. The great Trayambaka came to Vyasa and said with a great smile – “Oh Krishna Dvaipayana, you shall receive a son of your seeking. He will be as great and pure as you are. His mind and his intellect shall always be deep in the divine. He shall attain great fame in the three worlds”.

Thus, blessed by the Mahadeva himself, Vyasa came back to his Ashram. With the Agni-manthana-danda in his hands, he went towards the river and saw that great Apsara named – Ghritachi. At once, he was filled with a deep desire to be in union with the Apsara. Realizing that the great Sage is overcome with desire, Ghritachi herself took the form of a parrot and went to the sage. Vyasa was now filled with an overpowering desire in his entire body. With his immense penance, Vyasa sought to keep himself away from the desire but that was not to be. His energy of creation released itself out of his body and fell in the very ‘Arani’ that he was rubbing through this danda to create Agni. Vyasa continued his act of creating the Agni. In the two Aranis, instead of Agni was born the very great Sage Shuka. He came to be known as the Aranigarbha as a result. Since he was born as a result of ‘Rephalopa’ when the Shukra was being acted upon, he came to be known as Shukadeva. Divinity bestowed – his glow was equal to that of the Yagneshwara himself. The River Ganga came down to earth in the form of a divine woman and purified him in his first bath. From the heavens came down his deerskin and the Mantra Danda. Gandharvas sang Apsaras danced, all the divine conch shells blew to announce the birth of a great Sage of perfection. All the sages praised his greatness. All the Devas, Devarshis, the protectors of all worlds, Sages came down to Meru Parvata to see divinity itself born as the son of Sage Vyasa. Mahadeva himself came along with Uma and performed his Upanayana. Devendra himself offered Shuka with divine clothes and other elements needed for a tapasvi Brahmin. There was all-round happiness in all forms of life upon the birth of this great Sage.

Sage Shuka, thus born – remained in Meru Parvata performing his penance, divine rituals, and immense austerity. The Vedas came to him as easily as they did to Vyasa. Holding nothing other than Dharma in his mind, he sought Devaguru Brihaspati as his first guru. Having learned all the Shastras, itihasa-s, Purana-s, and the Vedas he offered the right Gurudakshina to Devaguru and returned to his Ashram to continue his penance. He was now equal to the best of the sages and all the Devi-Devatas. His advice was sought by the Devarshi-s themselves. His mind, though, was fixed only on one thing – that is to attain Moksha. Being a Grihastha was not a thought that came any close to him at all. 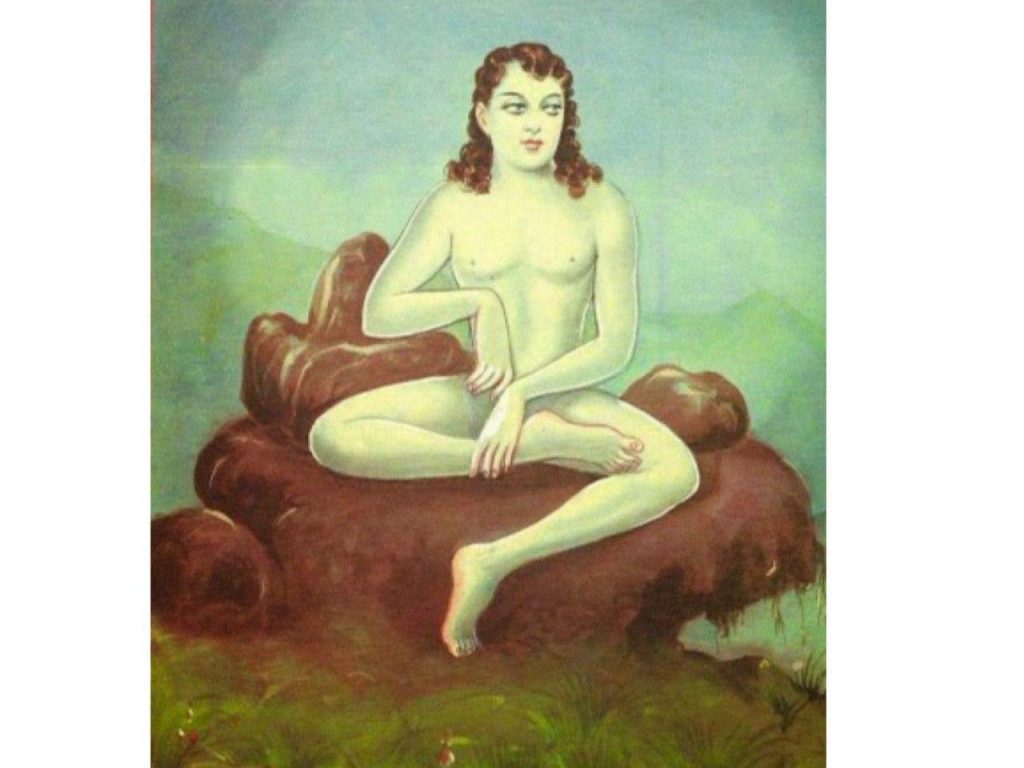 Sage Shuka sought to learn more about Moksha from Vyasa who directed him to study certain Shastras that concerned themselves with Moksha alone. Shuka, in no time, studied the Yoga and Samkhya. His aura was now equal to that of Brahma himself. Finally, Vyasa was pleased and said “Oh Shuka, you must now meet the great King Janaka of Mithila. From him alone you must learn the very Siddhanta of Moksha – that shall be your final step in the path of Moksha”. Vyasa further said “Oh Shuka, you must not use your divine powers to reach Mithila. You must go as a simple seeker. You must take the route traveled by Manushya-s, not the Devas or Danavas. You must not use your yogic powers and the Antariksha-maarga for travel. You must go there with humility, without seeking pleasure. You should not present yourselves to King Janaka as a learned person. You must perform everything that Janaka expects you to do without doubts and with absolute certainty”. Thus, blessed by Vyasa, Shuka set himself towards the city of Mithila. He crossed all the cities, towns, forests on his foot. He passed through the lands of Devas, Danavas, Kimpurushas and eventually came down to the Bharatavarsha and reached Mithila, walking down the entire path with as much ease as a bird would fly in the air. Even though he visited cities of pleasure, wealth, places of great beauty, grandeur and awe, nothing from those cities touched him except the thought of attaining Moksha and learning from Janaka on the next steps. The divine beauty of the Kingdom of Videha and the city of Mithila too made no impact on this great Sage Shuka. Moksha-dharma is all that he sought.

Finally, he reached the doorsteps of the palace of Mithila in the Kingdom of Videha. One of the soldiers was quite horrified at his state. He bowed to him and immediately sent him to the second stage of the palace complex, where Shuka sat on a seat. In no time, the minister of the Kingdom presented himself in front of Shuka and took him to the third stage. The third stage consisted of beautiful gardens, fountains, and charming places where the wives of the King and their friends, servants were in their Vihara. Shuka was presented upon with a great many enticements by the attendants of King Janaka. But Shuka was single-minded in his pursuit of Moksha. He neither responded to the invitations of pleasure nor did anger get the better of him in those attempts to deviate him from his path. Like any other day, he performed all his rituals, ate what he was minimally supposed to, and finally slept at the time that he always did – in his single most pursuit of the ultimate – Moksha.

In the part-2 of this series, we shall learn about his conversation with King Janaka. The very birth of Shuka speaks of what is a great birth. Desire is an aspect of life. It elevates itself as an element of Purushartha – serving greater causes – only when we seek it to be so. When our aim is to realize an offspring with the aura of the five elements of the universe, our desires are invoked by the most divine beings of creative energy (Apsaras) and become part of our penance.

The creative energies then are contained by the same instruments that are part of our penance, renunciation, and divinity. It is now part of our very divine performance. This, of course, must be preceded by a specific penance and with a specific boon from none other than Mahadeva – the great Viragi himself. Sage Vyasa too must go through that process.

Shuka may be born with immense divinity, but he needs a guru that he must search and seek. Vyasa must wait for his son to feel the deep urge and then alone guide him on a path of self-study. Sage Vyasa maybe Sage Vyasa. But in order to set his son in the path that he desires, Vyasa alone is not enough. Vyasa needs a King Janaka even for that great son Shuka to attain Moksha. Shuka too must perform Svadhyaya – self-study and then be ready for that great final journey. Shuka is not to doubt the choice of Vyasa and the candidature of Janaka, himself living in immense wealth and pleasure. The nature of the final journey is insightful. At every stage, Shuka is tested. It must be a journey of a common man so that one wins over the need for comfort. It must pass through every human enticement possible and come out with flying colors. One must hold one’s own sva-dharma in the midst of everything else that can potentially deviate us. For this, one must be able to see immense beauty in one’s sva-dharma. One must have prepared oneself through years of penance relinquishing pleasures of normal life and be in sva-dharma to undertake this testing journey to reach the destination. In summary, every seeker must find one’s own Guru, in fact, many Gurus. A Seeker must go through many journeys, many experiences, learn from many Gurus – before reaching a final Guru. An entire ecosystem is needed. The goal of civilization is to nurture this ecosystem and pass this from generation to generation. Every Shuka must find his own Janaka.

And that is not all. It is one thing to seek a son with the grace of five elements, it is another to have the courage to face the eventuality. We shall see that in the final part of the series on Sage Shuka.