Mahabharata Metaphors: The Importance of being Sahadeva 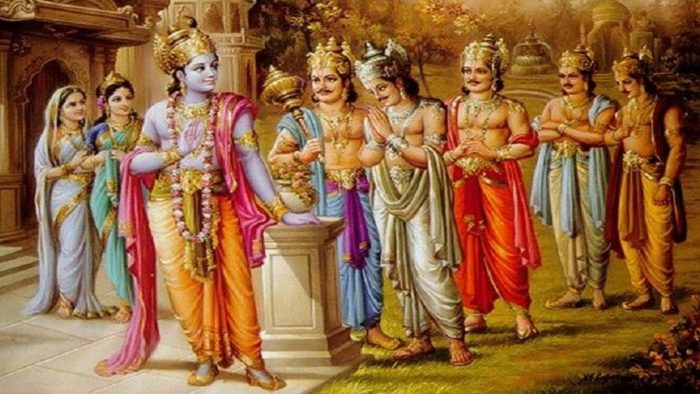 In Mahabharata, there are many great men and women who are either quiet or understated. Yet, they do not go without leaving their own mark. They carve their own niche and play a crucial role in the architecture that Mahabharata constructs.

Each is a metaphor signifying a specific aspect of life. Among all such men and women, Nakula and Sahadeva are significant. They are part of the entire story starting from Adi Parva till Svargarohana Parva.

They are part of every event that occurs but understated. Yet, their silence and understatedness are not without character. It adds a specific dimension to Mahabharata. Let us see the significance of Sahadeva.

At the disastrous Dice game, there is a small detail that is often lost, in the midst of ghastly acts and high drama. Yudhishthira introduced Sahadeva as “Oh Shakuni! Here is my brother Sahadeva. Know him as the administrator of Justice and a man of great learning and wisdom”.

Soon Yudhishthira lost everything. He pledged Draupadi and lost her as well. In no time, the most ghastly act ever witnessed in the Kuru Sabha occurred.

Dushyasana sought to disrobe Draupadi. Srikrishna saved Draupadi through her grace. An enraged Bheema sought to burn Yudhishthira’s hands. It is Sahadeva that he calls out for the fire to be brought. Bheemasena does not press his anger.

Arjuna prevails upon him. Of course, Sahadeva does not show any intention of acting further on Bheema’s words. Yet, it is important that Bheema calls out Sahadeva in support of the unimaginable act of burning Yudhishthira’s hands. Why did Bheema call out for Sahadeva? What was so special about Sahadeva?

Sahadeva is born to Madri by the grace of the Ashwins. The Ashwins, as we all know, are deities of medicine. In addition, they are the most handsome of all gods. Nakula and Sahadeva both possess similar qualities by the grace of Ashwins.

Each has its own unique qualities too. After the death of Madri, they become the darlings of Kunti. In particular, Sahadeva becomes the favorite of Kunti. He is by her side all the time. As a result, his personality is influenced by everything that Kunti goes through.

As Kunti brings her children up under her watchful eyes, Sahadeva learns to see the world through her sensitivities and sensibilities. He becomes an epitome of a quiet reflection of everything. As the Pandavas go through their roller coaster, what remains constant is this quietness of Sahadeva, his watchful eyes, and learning from careful observation.

Under Dronacharya, Sahadeva acquires the specialty of the sword. However, what distinguishes Sahadeva is his learning of Nitishastra from none other than Devaguru Brihaspati himself. Through this, he comes to be recognized as one who is well versed with all codes of conduct.

Clearly, personal orientation was a key consideration in learning and acquiring skills in that era. Sahadeva acquired exactly that knowledge that was in line with his Svadharma. As an aside, this much could be said of all characters in our Epics.

Gurus and Elders had the ability to take people in their path of Svadharma. After marrying Draupadi, Sahadeva also marries Vijaya – daughter of another Madra King Dyutimanta. He had two sons – Srutasena from Draupadi and Suhotra from Vijaya.

Sahadeva was a great warrior as well. In the Digvijaya before the Rajasuya Yagna, Sahadeva leads the campaign in the direction of the South. He won some in battles and others through his personality.

Sahadeva was blessed with great conversation ability and sweet speech. He reached the southern end of the seas and then sent words to Vibheeshana – the King of Lanka, through Ghatotkacha.

Vibheeshana read his message and accepted the sovereignty of Yudhishthira as a Time decided eventuality. Such was the power of Sahadeva’s words. He knew how to win without wielding the weapon.

At Mahishmati, Sahadeva faced a great challenge. Lord Agni himself was fighting on the side of King Nila. Through his fierce flames, Agni was burning the Pandava army and Sahadeva soon ran out of options.

Sahadeva realized that this battle could not be won through Kshatriya power. Sahadeva began to perform an austere prayer for Agni, standing still in one place.

“Oh Agni, the entire campaign is to perform Rajasuya Yaga and every Yagna is for you. In fact, you are very Yagna. It is only through your blessing that this Yagna can be performed. Make us victorious. You cannot create a hurdle for a performance that is exclusive for you”.

Agni was pleased. “Sahadeva, I am duty-bound to protect Nila from his enemies. But I shall not destroy you either – as you are performing the Rajasuya. I am aware of Yudhishthira’s righteous ambitions”.

Sahadeva was also the most important of all his ministers and Chief Advisor of Yudhishthira. As part of the administration, the delivery of justice was his chief responsibility.

This was natural given his personality, accumulation of wisdom by observing the world, and his deep knowledge of Niti Shastra. Yudhishthira always sought Sahadeva to be next to him.

Sahadeva became the first person that Yudhishthira consulted before initiating anything – the final word, of course, always came from Srikrishna. Thus at Rajasuya, it was Sahadeva who brought Srikrishna for the Agrapuja.

When Shishupala spoke with disrespect, it was Sahadeva who represented Yudhishthira’s anger and admonished Shishupala. When Kunti sat in the Sabha, it had to be Sahadeva by her side, always.

After losing their Kingdom over the dice game, Pandavas leave for the forest. Yudhishthira closes his faces so that his eyes don’t burn anything with anger. Bheema folded his shoulders and Arjuna kept a check on his weapons.

Nakula smeared himself with ash so that his beauty did not waver women. Sahadeva besmeared him so that he could not be recognized at all. His wisdom was such that his being recognized as leaving the city meant that the city lost its wisdom.

Kunti tells Draupadi “Keep an eye on my Sahadeva, Draupadi. He is my most dear child. Let his heart never sink”. Kunti knew that Sahadeva was their heart. Sahadeva’s well being meant the well being of the Pandavas.

Just as they took care of their mother, they cared for Sahadeva. They saved their own positivity, justice, and purity in their care of Sahadeva.

Draupadi then and Kunti earlier often praised Sahadeva as heroic, intelligent, wise, mindful of duties of Kshatriyas and one to prefer Agnipravesha over Adharma, with great behavior, rectitude of conduct, bashful, sweet-speech and virtuous.

Sahadeva was well versed in their worldly performances too. Apart from archery and swordsmanship, he was a great caretaker of Cows. He introduced himself to King Virata as one knew everything about all cows in 20 Yojanas – their past, present, and future. He is a man of clear thought and action. At Virata’s palace, after the exile, when his opinion on war was sought, Sahadeva clearly espoused the cause of the War.

“Provoke the war if we must, Sahadeva”. The evil of the Sabha had to be avenged and Dharma had to be restored. He always favored the accumulation of wealth as that alone helped protect Dharma and fulfill desires in a virtuous way.

Sahadeva, in all his purity, was very practical. When Kunti went away to the Vanaprastha and when she died in the forest fire, it was Sahadeva who suffered the most. He was the true torchbearer of the emotional virtues of the Kuruvamsha.

Thus, in his quiet corner, Sahadeva witnesses and understands everything. Yet, he appreciates that he must follow his brothers, for they are made for greater action. The brothers sought to grow all those virtues that they desire by nurturing and protecting Sahadeva’s virtues.

In their action, they may lose the clarity that Sahadeva stood for. But they know that they have saved themselves in Sahadeva. In turn, Sahadeva knows that his wisdom is fruitful only in action and that it belongs to Bheema and Arjuna. His perspective and wisdom are for the unity and prosperity of the Pandavas and the Dharma.

It is in this balance the secret of the unity of Pandavas lies. This balance was brought about by the genius of Kunti and quietly executed by Sahadeva. In particular, Sahadeva was the repository of all clarity for Yudhishthira.

In his Kingly responsibilities, Yudhishthira may fall into doubt and dilemma. In his distance, Sahadeva always maintained a clarity that Yudhishthira could always access.

Yet, intriguingly, Sahadeva fell at the Swargarohana in the beginning. A distraught Bheema sought an answer from Yudhishthira. It was only Yudhishthira who knew what came with wisdom. Sahadeva was very proud of his wisdom and thought of nobody as equal to his wisdom.

He may have never acted on this ego of his. Yet, it was very much within him. Thus, awareness of wisdom, if not wisdom in itself, was not void of ego.

It was only Yudhishthira who had freed himself from the ego of wisdom. Action and failure bring a lot more humility. Consultative wisdom seeks to conserve ego. Thus, Sahadeva had to fall and could not ascend to Swarga in the mortal body.

Sahadeva’s role and the resulting insight is a tribute to the genius of Maharshi Veda Vyasa. He flows in Mahabharata like a Guptagaminee river, invisible but monumentally essential. His role does not stand in isolation but is carved as part of the larger edifice where Kunti seeks to protect her children, ensure continuity, and nurture righteous values.

She sought to make her children both as individuals and brothers exemplary. In that, she nurtured each of the brothers in a unique way.

And she chose Sahadeva as one in whose following the brothers found the fulfillment of their personal journeys. And Sahadeva found his fulfillment in being the purest representative of tradition, lineage, and humanity.