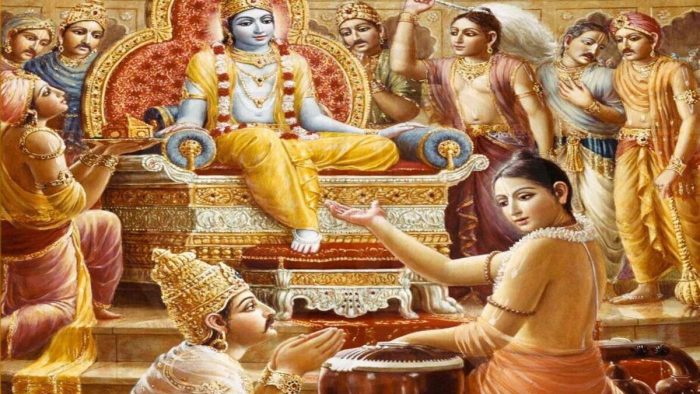 The Rajasuya Yagna is an important turning point in Mahabharata. Of course, one cannot count the number bends in the great journey of Mahabharata. At each curve the conflict between Pandavas and Kauravas develops a new strand.

But Rajasuya elevates the conflict into a higher plane. One may argue that if the Pandavas were to not press their ambition the conflict may not have escalated. That is wrong for two reasons.

Duryodhana’s jealousy expanded itself independent of Pandavas performances. Their presence anywhere was a problem for Duryodhana, leave alone next to Hastinapura. However, that is a poor defence for anybody to undertake a great performance such as Rajasuya.

The Tradition views that the deserving must perform the Rajasuya. The performance of Rajasuya is inseparable from observing Rajadharma and upholding the very Dharma itself.

One day, Devarshi Narada graces the Sabha of King Yudhishthira. Narada begins his conversation with an indulgence on Rajaneeti and enquiring if Yudhishthira was observing all the distilled royal practices of Bharatavarsha.

The sages and bards compiled wisdom collected from generations of kings into lores that could be poured into the very consciousness of the society. Royal visits were an opportunity for those practices to be reemphasized.

Kings valued their presence and their independence, for they benefited from such independent flow of knowledge. The very nature of that conversation elevated Yudhisthira into a higher plane of enquiry and ambition.

Yudhisthira’s Sabha was recently built by none other than Maya – the great Rakshasa Architect. The Sabha was full of wonders and was a proud possession of the Pandavas. But Yudhisthira sought to know if there were greater Sabhas than his.

That was a perfect opportunity for Narada to indulge in the purpose for which he had descended. He explained the great Sabhas of Indra, Yama, Varuna, Kubera and finally that of Brahma. While there was obvious splendour to those Sabhas, what struck Yudhisthira was the nature of the gathering.

A Sabha full of Sages, Oceans, Parvatas, Rivers, Devas, Apsaras, and Gandharvas caught his imagination. Finally what struck Yudhisthira was the presence of the glorious Kings of Ikshvaku and Aila dynasty.

In particular, he was struck by the special mention of King Harishchandra. He sought to know Harishchandra’s greatness and feats that earned him such a special honour in those Sabhas. Narada had led Yudhisthira to exactly the thought space that he desired. He explained the glory of King Harishchandra and his performance of the Rajasuya.

It is only the Rajasuya that earns a King the distinction of being a Chakravarti – an Emperor of all Kings. One who performs the great Rajasuya earns the right to grace the Indra Sabha. Finally, Narada mentioned that he also met his father King Pandu in the heavens. That struck an obvious emotional cord. Yudhisthira was curious to know if King Pandu had any message for his son.

Narada’s purpose was now served and revealed Pandu’s wish. Yudhisthira had all the qualities and distinctions to perform Rajasuya and King Pandu desired that he did so. Pandu wanted Narada to deliver this message to Yudhisthira.

Thus, the seeds of ambition were sown in the most Dharmic mind with a righteous cover. Not without caution certainly. Narada went on to describe the difficulties of performing Rajasuya. It would lead to an extraordinary churn in the royalty and may even lead to destructive war.

Nevertheless, establishing Dharma must be the sole concern of a good King. Any price that one paid was worth it. It also required enormous austerity and wealth. In summary, it required penance, wealth, purpose and power to perform a Rajasuya and earn the title of being a Chakravarti.

But Narada was quietly assertive that Yudhisthira had all qualities for the endeavour. Convinced that Yudhisthira seriously considered the performance, Devarshi Narada left his palace with a sense of divine accomplishment.

Yudhishthira’s mind was filled with Rajasuya. He invited his ministers and respected citizens for a series of meetings. They emphatically agreed that he deserved to perform one. Rather they wanted him to perform one sooner than later. Yudhithira moved himself to greater action.

This is an aspect to his personality. He did nothing without consultation. [The only time he did, the entire civilization paid a huge price. Such are the mistakes of the great]. But true to his nature he was not yet satisfied.

For him to perform a feat that was fraught with dangers to humanity, it needed an extraordinary form of approval. He repeated these discussions with his ministers and brothers many rounds.

The consistency of those voices seeking him to perform Rajasuya brought an element of conviction to Yudhisthira. But the human conviction was not sufficient. He invited Sage Dhaumya and Sage Dvaipayana for consultations and convinced himself of greater righteousness. He followed that with another round of consultation with his ministers on financial and material readiness.

All that firmly in place, Yudhisthira still perceived an element of doubt. This required the presence of none other than Bhagavan Srikrishna. Dwaraka to Hastinapura was a long-distance but Yudhisthira’s call always made it shorter.

Srikrishna did not take much time to give his ascent. But he established a greater purpose and narrative to the performance. Most of the Kings of the time belonged to the great lineages of Ikshvaku and Aila. It is mostly the Puru and Bhoja branches that thrived in Bharatavarsha.

Further, most of the Kings of the time belonged to the Kshatriya churn created by Sage Parashurama. However, times had changed. Many powerful and able Kings had pledged their pride at the feet of King Jarasandha of Magadha. He was himself an able King who could have performed Rajasuya and established himself as a Chakravarti.

With an element of Rakshasatva in him, cruelty was his fundamental nature. Through deceit and unrighteous exercise of power he had brought many Yadava Kings under his umbrella. Krishna narrated stories of great Kings such as Bheeshmaka, Bhagadatta, Shishupala, Dantavaktra and his able followers such as Hamsa and Dimbhaka.

Many of them recognized Jarasandha as a de facto emperor. He also narrated all efforts so far taken by Balarama and himself with partial results. So, here was somebody on his way to become an Emperor without righteousness and performing Rajasuya. Rajasuya required that Jarasandha was eliminated first.

With this Srikrishna had created an immediate purpose for Yudhisthira’s Kingly ambition. It had two consequences. It created a deep enthusiasm and energy in the minds of Bheema, Arjuna, Nakula and Sahadeva.

At the same time, it temporarily demoralized Yudhisthira. He did not seek to indulge in adventures that could have catastrophic consequences to fulfill an ambition. Finally, a combination of his ambition, Pandu’s wish, the confidence of his subjects and ministers, the ability of his brothers, and the divine approval of Srikrishna and sages made Yudhisthira give ascent to perform Rajasuya. The preparations started.

The path of this decision to perform Rajasuya is worthy of understanding. Firstly, there is a divine message. It is Devarshi Narada who, on his own, appears to seed the thought. Narada requires an opportune time.

The Pandavas had already gone through a round of fire and established themselves as worthy princes in every way. In valour, righteousness, austerity, conduct and knowledge they were exemplary. In addition, they had created a kingdom overpowering even the heavenly forces.

That is a great metaphor for their ability to create a new world. Divinity was on their side beyond the heavenly forces. Hence, Yudhisthira, their exemplary representative, most deserved to perform the Rajasuya.

No wonder Yudhishtira chose to be curious of his presence in Indra Sabha. That touched an aspect of Yudhisthira’s core. Being next to Harischandra is to achieve excellence in those aspects that he desired most. Yudhishthira mentally sought to belong to the tradition of Harishchandra.

However, there is a physical and emotional lineage to which he belonged to fundamentally. It is the lineage and tradition of Kuruvamsha. The tradition spoke to him through King Pandu. Lineage and ancestry always creates a greater sense of purpose, sometimes more than the personal. Without fulfilling the ancestral debt, Purushartha sadhana is near impossible.

These emotional factors created a space in Yudhisthira that Divinity could occupy. It is from here that he could leap towards a bigger purpose. It is Pandu’s wish and Harishchandra’s glory that churned Yudhishthira to seriously consider performing Rajasuya.

With the inner world now firmly seeking glory, it is the outer world that had to consent. Yudhisthira had many concentric worlds outside of him. His many rounds of consultation hold a mirror to what Tradition expected from great Kings.

Through his consultations Yudhishthira not only overcame his self-doubts but also rallied around the entire ecosystem towards the cause. There was now a stake in it for everybody.

Finally, extraordinary feats require a greater sense of purpose in the present. Personal ambition, one’s deserving and one’s readiness are not enough. A deep problem in the present ought to be solved. That must serve the cause of Dharma significantly.

Rajasuya ought to be performed for Dharmasamsthapana and Lokasangraha. Divinity follows such a purpose. Srikrishna establishes these elements for the Rajasuya to be performed.

In summary, we must carry our purpose with the purpose of the universe. If that is right, Divinity will recognize it. With perseverance, it becomes a Divine purpose.