Mahabharata Metaphors: The Ecosystem of Dushta Chatushtaya – The Four Evils 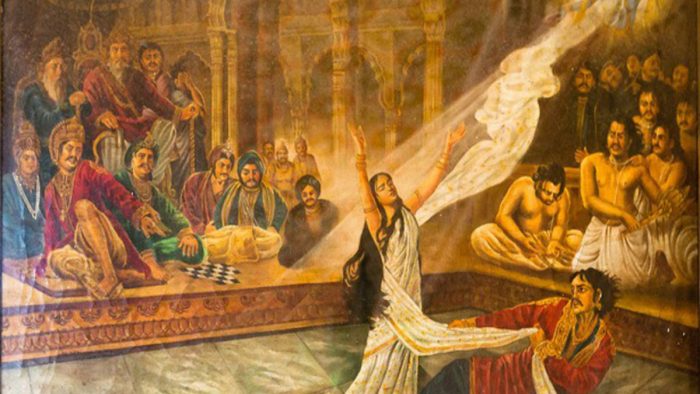 In Mahabharata, the Sabha Parva is clearly the defining moment. The defeat of Pandavas through deceit and disrobing of Draupadi determines everything else that follows. In a previous article, we have seen why the mighty Kuru stalwarts fail to protect the honor of Draupadi and themselves. It is a moment that signifies the failure of all knowledge, learning, high practices, and culture that we cherish.

It is a failure of the very civilization. Mahabharata’s warning is clear. We may collapse under the weight of the very intellectual structures we establish to create a great life. Quite ironic but a definite possibility. It requires a special ability to see Divinity very clearly to leap out of entanglements that we create for ourselves. But that is not all. There is another side to it. Why did the situation come to such a pass?

The chief architects of the Sabha episode are well known. Maharshi Vyasa poignantly describes them as the ‘Dushta Chatushtaya’ – the Four Evils. Yuvaraja Duryodhana, Karna, the scheming Shakuni and the thoughtless Dushasana. The question then is why do they do what they do? What was there in their mind and why was that so?

Why did the good counsel of Vidura not make any difference to their thinking? Why did they sink into a whirlpool of blindness from which they never escaped? Did they even try to make an escape? If not why? These are intriguing questions. After all, they had the same ecosystem and the same exposure to everything else that the Pandavas had. Yet, they reached where they reached.

Mahabharata metaphorically explores the root cause. It portrays Sabha Parva as the culmination of multiple deviations from the past. Shantanu’s marrying Satyavati was a definite moment of weakness. When a King gives into weakness the Karmic implications can be at a significant downstream. Bheeshma’s staunch refusal to see a greater Dharma than his personal, in the face of Hastinapura’s crisis, was another reason.

A union of excessive passion results in offsprings of extremities. Both Chitrangada and Vichitraveerya met their end because of their passion. One could not contain his valour, the other his pleasure. Unfortunately, Satyavati’s ‘manushya prayatna’ failed to prevent the disaster.

Once the disaster struck, Satyavati was in a great hurry to realize an heir for Hastinapura. After all, the great Bharatavamsha lineage was to continue. She invoked a method approved by the Tradition. She invited the most divine sage of her times. But she failed to ensure an appropriate preparation in her daughters-in-law for the divine method. It requires a Tapasya to receive children through Niyoga.

Ambika and Ambalika had no preparation. Satyavati’s refusal to see this reality is signified by Ambika’s refusal to see Vyasa. The result was a blind offspring. Ambalika goes pale. As a result, Pandu was born pale and with an indulgence in passion. In the end, it is difficult to say whether these very actions led to later disasters or destiny played a greater role.

Finally we have the embodiment of everything that went wrong – that is Dhritarashtra. Hereafter, Mahabharata takes a clear view. It is manushya prayatna that continuously failed to rise to the occasion. Destiny played a lesser role. Dhritarashtra suffered from a blindness that refused to see realities beyond him.

It was an absolute and complete blindness signified by his physical one. His manushya prayatna to overcome his limitation is nearly absent throughout Mahabharata. His sense of loss resulted from a blow delivered by destiny – his blindness.

He completely gave in to that. It’s a revenge against destiny that instilled a subtle revolt in him against established order. He sought to compensate his loss through his son by deviating from established order in sneaky ways. His sense of loss resulted in immense putramoha.

In comparison, Gandhari’s actions were a momentary indiscretion. She gave into the jealousy of the moment and forced her womb. Unwittingly, that resulted in the emotion of jealousy becoming the core element in all her children.

It multiplied by a hundred. In a way, that moment signifies how Dhritarashtra’s presence influenced Gandhari in a moment of weakness. She blinded herself to show solidarity with her husband, an act of piety.

But in that process, she forced an element of her husband into her as well. Our good intention actions too cannot escape their Karmic scrutiny and implications. It’s quite tragic that her Tapasya failed exactly when required. That is destiny.

As a result Duryodhana was born, at whose birth such bad omens occurred that Vidura even suggested abandoning the child. Nevertheless, beyond this point Destiny does not play any more role in the degeneration of the Kauravas. It does not provide any twist or turn against the Kauravas. Tapasya (manushya prayatna) progressively weakened.

Kauravas show absolutely no Tapasya or a larger purpose. This lack of Tapasya resulted in an ecosystem of Arishadvarga around Duryodhana. It is through Duryodhana that Mahabharata demonstrates how Arishadvarga results in disastrous fruits when it takes firm root. It builds a treatise on human fallibility through fundamental elements in human beings.

Dhritarashtra is the epitome of ‘Moha’. As a result, he took his sense of loss with a disastrous degree of importance that led to jealousy. In his Moha for son, he sowed the seeds of unquenchable desire and jealousy. Duryodhana became an epitome of jealousy – Matsarya.

Unchecked Moha leads to a sense of loss. That results in ‘matsarya’ – jealousy. In addition to the inherited Matsarya, Duryodhana had his own element of Lobha. He wanted everything in one life and never had enough.

When you have so much ‘Moha’, unfulfilled desire leads to Krodha – anger. The sense of entitlement that comes from being a Prince brings a natural element of Mada. Thus Duryodhana became a repository of the Arishadvarga (Kama, Krodha, Lobha, Moha, Mada and Matsarya).

That Karna becomes the best friend of Duryodhana is a metaphor for what they shared in common. That is Matsarya. In Karna, it expressed itself as Spardha – the competition. In Duryodhana – it took the form of Lobha.

Karna was in eternal competition with the Pandavas in general and Arjuna in particular. His sense of purpose came from being equal or superior to them. The root of this in Karna is his sense of ‘Excellence’, which constantly was overshadowed by the Pandavas in the Gurukula. It is his unchecked sense of Excellence that led to Matsarya.

On its own in a good ecosystem, the Arishadvarga element in all of us is constantly reset or kept in check. Two aspects result in their escalation in Mahabharata. Firstly, Dhritarashtra’s blind love for his son shielded it from any correction. Secondly, it is Shakuni’s intelligence that resulted in exponential growth of the ambition and the Arishadvarga of Duryodhana.

Mahabharata’s perspective is that it is the combination that escalates the entropy. The root is still Duryodhana’s Lobha. However, that was unlikely to achieve anything without Shakuni’s intelligence. Shakuni had enough intelligence to see the reality. He advised Duryodhana to abandon his jealousy and embrace the Pandavas.

Duryodhana not just brushed Shakuni aside but also invoked emotion to bring him onto his side for manipulation. Thus Lobha won over intelligence. In a different ecosystem, Shakuni’s intelligence may have resulted in a different outcome.

Finally, Mahabharata portrays the evolution of an evil ecosystem. It could sustain an unbridled growth of the Arishadvarga. Duryodhana became the central repository of everything. Thus Mahabharata’s warning is that at the first signal of the raise of such a repository it must be abandoned.

That is the advice Vidura provided to Yudhisthira at the time of Duryodhana’s birth. Duryodhana’s Arishadvarga was such that it could create an ecosystem of its own right under the nose of those who were the epitome of Dharma.

What is the power of such an ecosystem? It could build a Sabha, a metaphor for an environment that could mesmerize an entire ensemble into inaction at the most heinous of crimes. It could dull the intelligence of the brightest into performing something that one’s heart did not agree to.

It could ensure that the message of wisdom and righteousness, of Vidura, failed to pierce through the walls created by intelligence and reach the hearts for good action. That is the perspective of Mahabharata.

Mahabharata also throws light on a crucial perspective loss that leads to deterioration. Vidura narrates a beautiful story to Dhritarashtra right in the midst of the Dice game. A King once was gifted with divine birds that laid golden eggs. The birds could lay only a few eggs per day.

The King got greedy and sought more. He thought that the flesh of the birds could be gold. He could get rich in a single day. He ordered the birds to be put to death with gold taken out from their flesh. Alas, he realized that the birds were normal in their flesh, feathers and blood.

The King neither had the birds nor the gold now. It was the Tapasya of the birds that made them lay golden eggs. Vidura compared the birds to Pandavas and the King to Dhritarashtra. He urged him not to lose Pandavas.

In this beautiful story, Vidura lays a perspective. For good life and for a good society, it is necessary that the birds lay golden eggs on their own. We must seek those birds of Tapasya, not their eggs, says Vidura. Seek the Pandavas, do not seek their wealth. By the very association with Pandavas, there is a lot of wealth to be gained.

This is a treatise on possession. Duryodhana sought to possess material and for himself. Vidura’s perspective came from sustaining life for the entire Universe of Life. That is Dharma. It came from a holistic appreciation of the Purushartha. Kings must seek Purushartha for one and all.

Thus, the Arishadvarga in us dulls our faith and trust in the Purushartha. The Dharma and Moksha cease to be of importance. Artha and Kama rein supreme. Hence, Arishadvarga must be under check always. That requires Tapasya.

When the Arishadvarga forms its own ecosystem, it builds a wall of protection for its own self. It blocks all righteous thoughts and wisdom from reaching hearts for action.

Such an ecosystem is self-destructive too and seeks to disrobe Draupadi. It does not understand that nothing has an impact on Devi Draupadi’s clarity. The mesmerizing Sabha, intelligence of Shakuni, cruelty of Dushasana, humiliation heaped by Duryodhana and Karna – nothing dulls Draupadi.

She retained the conviction to ask the most difficult of questions to the Sabha. (Before Draupadi, it is only Vidura who questioned Yudhisthira’s right to pledge her and lose after losing himself). She made the entire Sabha hang its heads in shame. She released her husbands from their ‘Dasa’ state.

The Dushta Chatushtaya forgot that Draupadi had access to Divinity. Divinity then stepped in to not only save the day but also clean the system through a large scale correction. It is Divinity alone that helps us keep our Arishadvarga in check and not form an ecosystem of its own.