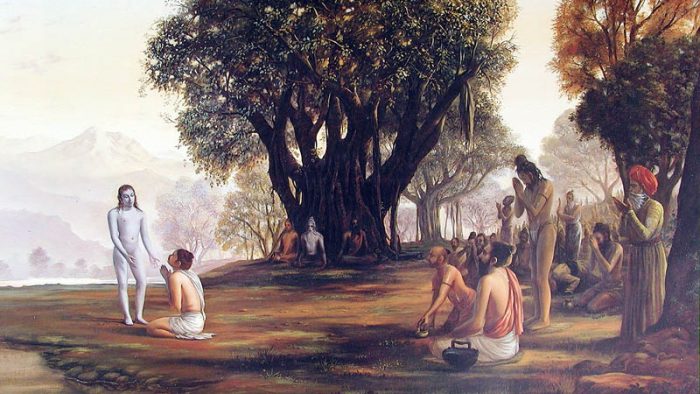 Sage Shuka, the born liberated, has already discovered his destiny. He must now prepare himself for it. In his preparation, he prepares the ecosystem for it and discovers many truths that are valuable for the civilization. Those who attain Mukti never do it simply for themselves they leave behind great insights for humanity in their extraordinary journey. Hence, their journey towards attaining Moksha becomes as important as their attaining Moksha itself.

Maharaja Janaka came down with his entire ensemble to meet Shuka, the son of his guru Vyasa. He was carrying divine waters in an arghya-paatra on his head and his ministers were carrying a special seat for Shuka. He immersed Shuka’s feet with divine waters, offered him the high seat and special gems as gift. He endowed him in all ways befitting a high scholar, in accordance with the dharmic practices of the Shastras. Priests chanted Veda Mantras. In honour of the brahmin, he offered a cow as daana. Shuka received it with grace, touched it with respect and sought it to be released free at once. Janaka then enquired the reason for Shuka to have undertaken such an arduous journey all alone to meet him.

Shuka said “Oh Janaka, my great father has sent me here to receive Moksha dharma from you. He spoke highly of you. He said that whether it is the righteous way of living in this world or renouncing this world to seek Mukti, it is the Videha King Janaka the right person to guide you. He alone can relieve of you of all your questions and concerns. Hence, I have come here seeking your knowledge, guidance and perspective. Oh Janaka, please tell me – What are the responsibilities of a Brahmana and what is the nature of Moksha, how does one undertake a journey attain it? Is it through Tapas or through Knowledge that one can attain Moksha?” 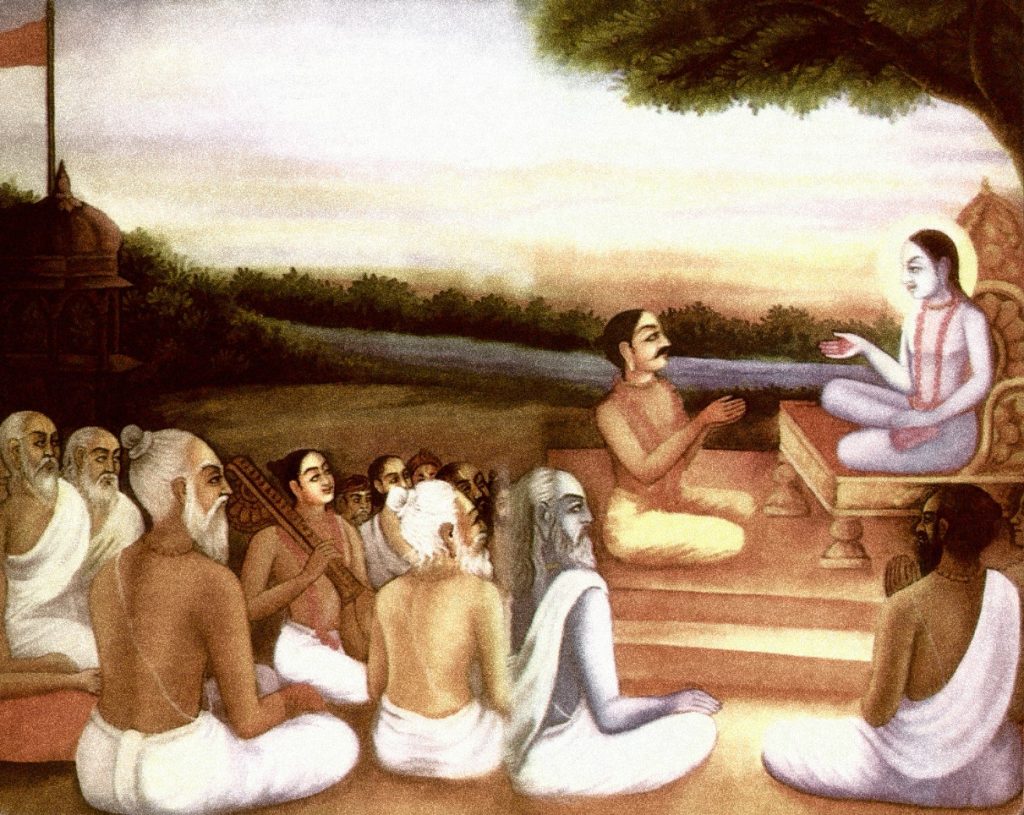 Janaka first began to narrate the responsibilities and duties of a Brahmana. He described the Brahmacharya, Grihastha, Vanaprastha and the Sanyasa Ashramas and that one must experience these phases as ordained by the Shastras and perform every single duty. One must perform Adhyayana under the guidance of a Guru to attain the right knowledge. One must become a Grihastha, receive children and grandchildren and grace one’s spouse with love and affection. One must fulfill Artha and Kama through Dharma, perform responsibilities appropriately towards ancestors and the descendents. One must maintain the agni and perform all duties towards the society. Only then one is ready to undertake the Vanaprastha and the eventual Sanyasa to seek Moksha.

Shukadeva listened patiently and, of course, knew that this would be the response of Janaka. He had his next question ready. “Oh Janaka, what if one has acquired all the Gnana and Vijnana that one must as a Brahmachaari itself? Does one still need to be in the Grihastha-Vanaprastha-Sanyasa before seeking Moksha? I am eager to learn this from your wisdom of Vedic knowledge”. Janaka then gave a very lengthy answer. Karma was to be performed as a means of moving from one phase of life to another. Karma was also required ensure continuity of life in accordance to Ruta and striving for Sthiti.

Hence, Karma was not to be abandoned ever. Without a Guru, knowledge of the Shastras was impossible. Without the knowledge of the Shastra, there was no Gnana, and without appreciating the nature of Gnana and Vignana one did not become ready for Moksha. Hence, it was important for one to go through the Ashramas. This went on for a long time. Finally, Janaka acknowledged that Shukadeva was indeed ready for Moksha as he had acquired everything that one must, right in the Brahmacharya itself.

Shukadeva was pleased. She sat in Dhyana and decided to experience himself as his own Atma. After this experience of his own self of divinity, he was filled with a divine peace. He then decided to go towards the Himavatparvata in the same speed as Lord Vayu would. He passed through the beautiful mountains and saw the beautiful Ashrama of his father, Sage Vyasa. The entire mountain was void of any being except Vyasa and his four Shishyas – Jaimini, Taila, Vaishampayana and Sumantu. Vyasa was guiding them in their Adhyayana of the respective Vedas. From a distance Vyasa saw his son Sage Shuka, glowing like the very Sun himself, approaching his Ashrama. The Ashrama was in a beautiful place in the Himavatparvata, with peaks reaching the sky, cutting through the clouds and with lakes ornamenting the white cover of snow on the mountains.

Vyasa looked at Shuka from a distance. In his eyes, Vyasa realized that Shuka was untouched by the beauty of the places he passed through and was returning to. Filled with a single purpose in his mind, Shuka came down the mountain from the peak to the Ashrama and held the feet of his father with both hands. He quietly joined the disciples of his father. There was absolute silence and peace for a while. Shuka narrated his conversation with Janaka in entirety. Sage Vyasa was now convinced that Shuka was complete ready. But, Vyasa was himself not ready yet. The four shishyas and Shuka continued their adhayana of the Vedas under Sage Vyasa. Thus, passed many years of practice, peace and experience of the divine.

Once all the disciples were around Sage Vyasa performing their adhyayana. They had attained a prowess of certitude. They were always quiet and in peace with themselves, performing austerities and penance all the time. They were overcome with a thought and sought from Sage Vyasa that they were 5 disciples, including Shuka, who had the opportunity to receive the nectar of Vedas directly from Vyasa and that there should be no sixth person to receive the same honour. Vyasa considered all of them as his own children. Wearing the smile of a father, he granted them this boon. There would be no more direct Shishyas of Vyasa to receive all his prowess in this method, detail, purpose and perspective. Vedas were to flow only through them to the later generations.

Vyasa then set his disciples in the righteous path of how to accept disciples and impart them the Vedic knowledge through method, ritual, penance and performance. He ordained that they must ensure that the Dharmic perspective was taught to one and all in the universe, keeping the brahmanas ahead. He emphasized on the importance of Svadhyaya – the eternal study from within that a Brahmana and a Sage must never abandon. He implored upon them on the dangers of seeking an answer in Adharma and providing one in Adharma. Knowledge must be sought and received in the right way only.

The disciples embraced each other. They promised Vyasa that their conduct forever would be in accordance to the expectations of Vyasa. They discussed amongst themselves for a while and spoke to Vyasa again “Maharshi – we seek to return to the plains and spread the Vedas. We seek to be relieved from the Ashrama with your grace and blessing”. Vyasa agreed and gave them permission to continue their journey in any of the worlds but warned them of those who seek to deceive. The disciples climbed down the Himavatparvata, ventured into the plains, entered the Grihasthaashrama and performed many Yagnas for all in the society, built their own Ashrama and accepted disciples. They continued their Svadhyaya and in a short while became renowned in the world.

Without his disciples, Sage Vyasa was now alone in his Ashrama with the ever-silent Sage Shuka. He kept looking at Shuka and stayed that way for a long time. Much time was spent. The great Sage forgot his adhyayana and Shuka needed nothing. After a while, Devarshi Narada came to the Ashrama and alerted Vyasa that the surrounding was diminishing in grace, vigour and divinity with no chanting of the Vedas. Narada ordained that the great Sage must continue the chant with his son and emphasized on its eternal importance for every brahmana. Vyasa recovered himself and began to chant along with Shuka.

The entire Himavatparvata was filled with their chanting. Just then from the sides of the ocean a great wind passed through their Ashrama. Vyasa at once stopped the chanting in honour of Vayu-devata. Shuka was surprised and sought to know the nature of Vayu-devata. The great sage narrated the omnipresence and omniscient importance of Vayu. The Vedas were the breath of the supreme and Vayudevata himself was one. Hence, the chanting of the Vedas should never come in the way of the flow of Vayu-devata. He then sought that Shuka continue his adhyayana and proceeded towards Devaganga.

This story is as much about Sage Vyasa as it is about Shuka. Shuka must be sufficiently tested before being declared as ready to undertake his exceptional journey towards Moksha. He must pass every single test failing which he must take the path set for every human being. But in this preparation of Shuka, there is a parallel preparation of Vyasa himself. A quite turmoil is setting within him as he sets his son towards the path of Moksha. He must perform his duties towards his disciples. Their leaving has an impact on Vyasa. The great sage is a human yet and he knows if that affects him, then Shuka’s leaving would as well and with greater intensity. If Sage Vyasa must forget to indulge Veda chanting and for Devarshi Narada must come remind him, Vyasa knows that it is an intensely transformational time ahead of him. Shuka alone is unperturbed. The leaving of his close associates, diminishing of the vigour of the Ashram, the Veda chanting and the stopping of it.

He has simply elevated himself beyond everything. But, in spite of his absolute readiness, he continues his Svadhyaya under Vyasa for many years – Karma must continue, the liberated must perform it so that life continues in a sustainable way in the future, even if that is not required for their own selves. It is their responsibility and part of the Runa. It is represented through a beautiful metaphor – even the Veda chanting must be stopped so that the Great Wind of Vayu is not upset, for it is the very breathing of the supreme. Nothing must be done to disturb that, certainly not our Karma which is very essential for the cosmic order to hold itself.

There is an important aside in this story. Cow is offered as Daana to the most sensitive in the society because they shall set it free or take care of it in the most sensitive manner. That is a metaphor for the sensitivity that the civilization strived for.