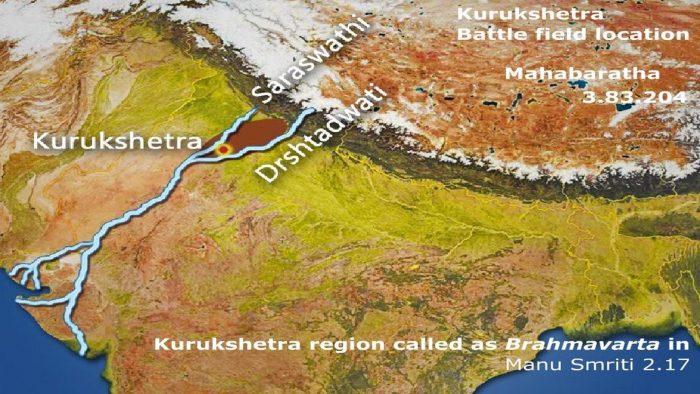 For a long time, River Saraswati was considered merely mythical. However, recent satellite image analysis has revealed a definite paleochannel of a river that dried long ago. It runs through that desert joining the ocean in Gujarat. This clearly establishes that there was a river running from the Himalayas through Haryana, Rajasthan, and Gujarat into the ocean.

What more, the path of the paleochannel greatly matches Balarama’s pilgrimage route in the Teerthayatra Parva. The river is supposed to have dried up by 1800BC. As a result, Mahabharata’s date and hence that of Vedic Civilization, goes beyond 1800BC, at the very least.

This delivers a fatal blow to the Aryan Invasion/Migration Theory. This possibility was explored by European researchers in the 18th and 19th Centuries too. However, once colonial powers firmly settled they suppressed this research. Post-independence, our own academics belonging to an ideology completely eliminated this from our history textbooks.

Balarama Teertha yatra is a treasure trove of descriptions that could be used to explore a possible date for Mahabharata accounts. Dr. MM Pandit’s research in this direction is worthy of consideration.

River Saraswati is described as Guptagamini in the tradition. That has proved to be real in the physical sense as well. She flew in our minds as a Guptagamini as well. However, the discovery of her paleochannel has brought her out from her subtle existence to conscious existence in our minds.

This changed flow in our minds is transforming our barren minds into a fertile ground for Indic Civilizational Thought. We now have renewed confidence in our heritage in every dimension. Just as Ganga flew over the ashes of Bhageeratha’s ancestors giving them Mukti, River Saraswati’s discovery is liberating our minds.

Ever since Modern Indices have gone back to our texts with a greater zeal for all kinds of knowledge into history. We must now take a big leap to rebuild our civilization in continuity with our Civilizational thought.

River Saraswati was also a witness to the great conflict between Sage Vasishtha and Sage Vishwamitra. Rather she played a prominent role. On the eastern shore of Saraswati was Vasishtha’s Ashram and in the west was Vishwamitra’s.

In the spardha of their Tapas, the sages entered into the realm of a great conflict. Sage Vishwatra performed an austere Tapas that surpassed the intensity of Sage Vasishtha. Yet, Vishwamitra was concerned about the Brahma Tejas of Vasishtha.

The urge to surpass Vasishtha swept Vishwamitra into a destructive thought. He imagined Saraswati as sweeping Vasishtha away from his Ashrama towards him, giving him an opportunity to end Vasishtha’s life through his powers.

Vishwamitra concentrated his powers and thought of Saraswati. That great River Saraswati was compelled to bring herself to Vishwamitra. She was concerned as she knew the purpose. But she had to bow in front of divine power. She summoned herself in grief.

Vishwamitra expressed his design to Saraswati whose grief multiplied. She stood with folded hands and in tears. Vishwamitra immediately ordered her to not indulge indiscretion of right and wrong. She was to bring Vasishtha to the mercy of Vishwamitra.

Saraswati cursed her fate for having to be part of an evil act of Sage Vishwamitra. She decided to narrate everything to Sage Vasishtha himself. She knew of his unmatched powers from his Tapas. She was worried if she had to pay a price for Vishwamitra’s misadventure.

On the contrary, Vasishtha expressed his concern for her well being. She urged her to protect herself first. He asked her to sweep him towards Vishwamitra and leave the rest to fate. If not, Vishwamitra was sure to curse her to an ill fate. He had decided to face this destructive power by himself.

Otherwise, it would burn the world. Saraswati did not give up. She repeatedly thought of a way to act in a way that bode good for all. At last, she decided that she would sweep Vasishtha away when Vishwamitra was performing his Japa, Home, and Tapas.

Bound by the conduct of his performances, Vishwamitra would not perform any act in violation. Saraswati would get enough time to save Vasishtha.

On the opportune moment, Saraswati swept away Vasishtha’s Ashrama on the eastern shore. Even in those moments of distress, Vasishtha praised the divinity of River Saraswati through a Stotra. Upon reaching Vishwamitra’s Ashrama, Saraswati announced many times that Vasishtha was at the disposal of Vishwamitra.

The latter did not have enough time to finish his performances and find an appropriate weapon. Saraswati knew the ferocity of Vishwamitra’s vengeance. She did not waste a moment. She quickly drove Vasishtha further away towards the east, far away from his Ashrama. She had performed all that was expected of her by the word.

Yet she had saved Vasishtha from an ill fate that seemed difficult to avoid. This place where Vasishtha was swept and saved became famous. In due course of time, it came to be known as Vasishta Pravaha.

Vishwamitra felt robbed of his opportunity to achieve his vengeance. He did not take to this kindly. Even though Saraswati had fulfilled Vishwamitra’s wishes, she had to pay a price for her conduct.

Vishwamitra cursed Saraswati to turn red with blood and be dear only to the Rakshasas. In due course of time, Vasishtha Pravaha was only visited by Rakshasas. Her shores were inhabited by Rakshasas eagerly seeking blood to quench their thirst.

After many years, austere sages began to visit Vasishtha Pravaha. The sages were disturbed by Saraswati flowing with blood and Rakshasas establishing their living around such a divine river.

One fine day, they invited Saraswati for a conversation and sought to know what caused her that ill fate. Upon learning the curse from Vishwamitra, the sages set Saraswati on an austere path of performances, full of Vratas and Tapas, seeking Mahadeva’s grace.

Finally, Mahadeva was pleased and blessed Saraswati. She was once again filled with her divine waters. Thus, the sages released Saraswati from Vishwamitra’s curse.

Rakshasas were now robbed of their blood. They did not have enough powers to confront the austerity of these sages. Instead, they submitted themselves to the sages and presented their situation. “Oh sages, we are now full of hunger without having to drink blood.

Once part of the Sanatana tradition, we have gone far away with disgrace. We are cursed to perform extreme acts as sages such as you are not of any mercy towards us. As a result, our ill performances are multiplying by the day. We have become Brahma Rakshasas.

Ill performances of our parents, our misconduct towards Brahmanas, Ritvijas, Gurus, and old are making us Rakshasas and we are born here. We seek to be released from this fate through your divine powers”.

The sages were pleased with the Rakshasas. They set them on an austere path. They urged them to not perform any of the ill acts that enhanced their Rakshasa attributes. The sages then prayed to River Saraswati and invoked her powers to liberate the Rakshasas from their ill fate.

The story signifies the place a river has in our civilization, especially Saraswati which is glorified in Rigveda, Ramayana, and Mahabharata. In all our accounts, rivers are divine. Sages and Gods revere them. They have the power to transform Rakshasas and release them from their destructive beings.

They have the power to transform divine conflicts into a larger good. Ashramas of sages are normally found on the shores of a river. Divine beings such as Vasishtha and River Saraswati face destructive situations largely by themselves.

They pay a larger price to save the rest of the world. For they alone have the revival powers through their austerities.

This is at once a moving and intriguing story. On the one hand, it describes the conflict between Vasishtha and Vishwamitra. It is Spardha, the competition, that escalates itself into a bloody conflict.

It represents what one could be driven by competition to seek equality without a larger purpose. Competition ought to be bound by a purpose that brings good to the larger world – Lokasangraha.

The competition that seeks merely equality is likely to create vengeance. Tapas may bring us powers and we may have limited ability to invoke those powers even if that is for unrighteous purposes. Finally, we lose our Tapas in those moments of discretion lapse.

Vishwamitra transforming Saraswati into a Rakshasa Teertha symbolizes the intensity of the conflict and its aftermath. On the one hand, Vishwamitra’s vengeance was not fulfilled. On the other, the region became a haven for Rakshasas turning away from the tradition of Sanatana Dharma.

Vishwamitra himself had to move to a different place for his austerity. Vasishtha though had saved Saraswati from a bigger ill fate. By letting Saraswati live by her words to Vishwamitra, he saved her from bigger wrath. He left her with enough divinity within her.

As a result, other sages could set her on a path of austerity and grace of Mahadev to restore her full divinity.

At the same time, the Rakshasas to have to internally feel the urge to be released and seek the grace of the sages. The world is only safe as long as the austere powers of the Sages are superior to that of the Rakshasas.

As long as River Saraswati flows, we will release Rakshasas from the state of their destructive beings. We will also liberate ourselves from any Tamas in our civilizational thought.