Lessons From The Mahabharata: Kanika Niti – The Dead Inspire No Fear 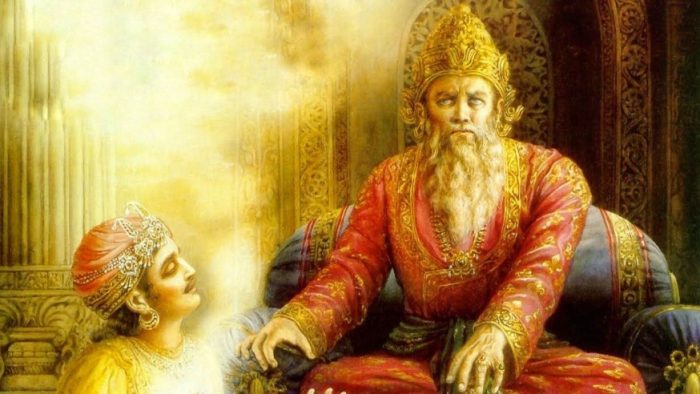 The Shanti and Anushasan Parvas of the Mahabharata dwell at length on statecraft and the duties of a king as a ruler in normal times (Raj-dharma), in times of distress (Apad-dharma), and so on (Dana-dharma, Moksha-dharma).

There are other mini treatises on statecraft to be found in the text, Vidura Niti being one notable example (contained entirely in Prajagara Parva, within Udyoga Parva).

Another popular one is Kanika Niti, but which has been excised from the Critical Edition of the Mahabharata. It is nonetheless a notable exposition that deserves to be retold.

Kanika Niti is encapsulated in one chapter at the end of Sambhava Parva, which is an upa Parva of the Adi Parva. This Parva dwells on the origins of the principal characters in the Mahabharata.

It is not only the longest Parva within the Adi Parva, but, at 2394 shlokas, is also the eighth-longest in the entire Mahabharta (as measured by the Critical Edition). It has sixty-five chapters or sections. In the P.C. Ray (K.M. Ganguly) version, Kanika Niti is contained in the hundred and forty-second section of the Sambhava Parva.

After Drupada had been defeated by the Pandavas at the behest of their guru, Drona gave back to Drupada that half of the kingdom which lay south of the Bhagirathi river, while he became king of the territory to the north.

Drupada thereafter resided in Kampilya, burning with the desire to seek revenge against his childhood friend and now lifelong foe. Meanwhile, Dhritarashtra installed Yudhishthira as the heir-apparent (yuvaraja).

Within a brief period of time, Yudhishthira excelled as an administrator, Bhimasena finished his mace (gadaa) education under Sankarshana (Balarama), and Arjuna received from Drona the celestial Brahmashira weapon.

The Pandava brothers extended the Kuru kingdom through their prowess. This unbridled and growing prosperity of the Pandavas caused Dhritarashtra to lose sleep. This sets the stage for the last chapter in the Sambhava Parva – Kanika Niti. 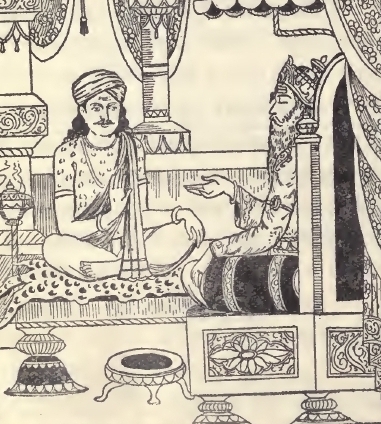 Dhritarashtra summoned Kanika, one of his ministers and who specialized in politics and in counsel to kings, and laid bare his growing insecurities on account of the Pandavas’ growing popularity and strength.

When Dhritarashtra found himself bereft of sleep several years later, on hearing Sanjaya’s words after his peace mission to the Pandavas, he sent for Vidura, his half-brother, setting the stage for what is known as Vidura Niti.

This time, however, the blind king turned to the decidedly ruthless Kanika. Kanika started by advising Dhritarashtra that a king’s duty was to always strive to extend the boundaries of his kingdom, to be ever ready to take advantage of the faults of his foes, and to be ever prepared to strike. An enemy, once subdued, deserved no mercy, and must be destroyed. In his words, ‘The dead can never inspire any fear.’

Tolerating an enemy was like allowing a thorn to remain embedded in the flesh, which would soon turn into a festering sore. But what if a king was unable to strike at his foe? What was the advised course of action in such situations?

Kanika counseled that a king must ‘feign blindness and deafness’, that he treats his bow as if made of straw (i.e., useless), and to wait for the opportune moment. Just as the branches and twigs of a tree which has been uprooted cannot survive, so can’t the allies and supporters of a foe survive if the principal enemy is destroyed.

No means, according to Kanika, are to be discarded in the pursuit of the destruction of one’s enemy. Even the garb of holiness can be used “as a hooked staff to bend down a branch in order to pluck the fruits that are ripe.”

Concluding his opening remarks, Kanika said that any and all of the four means could be employed to defeat foes – conciliation, money, creating disunion among allies, or outright force; in other words, ‘saam, daam, bhed, and dand’.

Dhritarashtra asked Kanika to elaborate on how the four could be employed to subjugate an enemy. Kanika chose to employ a fable to make his point. Thus starts the story of the five unlikely friends – the jackal, mongoose, tiger, mouse, and wolf.

In a jungle lived a jackal with four of his friends. Despite their best efforts, none of them could lay their hands or sink their teeth on a deer that lived in the forest.

Frustrated in their efforts, they all met and the jackal proposed that the mouse nibble away at the feet of the deer, after which the tiger could easily kill it. They agreed upon the plan and it was executed successfully.

The deer dead and waiting to be eaten, the jackal proposed that his companions go perform their ablutions before feasting on the deer. They all agreed. The tiger was the first to return. He saw the jackal deep in thought.

When asked, the jackal replied that the mouse had said that even though the credit for the deer’s hunt properly belonged to it – the mouse – it would be the tiger who would feast on it. His pride touched to the quick, the tiger spoke that he would henceforth eat only what he had slain himself. Saying this, he departed.

The next to return was the mouse. The jackal said that the carcass of the deer had been poisoned since it had been touched by the tiger’s claws.

Therefore, he, the jackal, would not eat it. He had, however, no compunctions about killing and eating the mouse. The terrified mouse scampered into its hole.

The third to return was the wolf. To the wolf, the jackal said that the tiger was angry with him and that he was expected soon with his wife.

The jackal advised the wolf to do as he thought fit. The wolf fled in fear of the tiger. Now remained only the mongoose.

When the mongoose returned, the jackal told him that he had defeated the tiger, the wolf, and the mouse through the strength of his arms and that the mongoose could eat the deer only after defeating him.

The mongoose realized he stood no chance against the jackal who had defeated foes stronger and bigger than him. He also fled.

The field was thus clear. The jackal had eliminated the wolf, tiger, mouse, and mongoose without firing a shot, in a manner of speaking.

Having made his point with the story, Kanika elaborated further. Whether a son, brother, king or even teacher, if they turned adversarial, had to be slain. Whether through deception, poison, or any other means, they deserved no mercy.

Deception, Kanika maintained, was an essential part of this stratagem. Anger was never to be revealed, a smile to be adorned on the lips before and even when striking the enemy. Shedding fake tears also for the dead foe was also acceptable. This is also what Bhishma tells Yudhishthira in the Raj Dharma Parva:

“Even if one has to strike, one should speak pleasant words before striking. After striking, one should show compassion and sorrow and weep a little. In front of them, one should say, ‘I am not pleased that he has been killed.’” [12.103.34-35]

A king could prosper only if he killed his enemies, just as a fisherman prospered only by catching and then killing fish. But that is not the end of the matter. Even the house of the one condemned to death had to be destroyed. Ruthlessness was the name of the game.

The analogy Kanika uses is that of a razor – to be as unpitying as the razor is sharp, to hide one’s intent like a razor is hidden in a leather sheath, to spare not a foe, his dependents or allies just as a razor leaves not a single hair on the chin.

Paranoia is what Kanika advocated. He advised the king that neither should one trust too much or too little nor should the king confide too much. Spies were to be relied upon.

Kanika advocated placing spies in places of amusement, gardens, temples, dining halls, streets, and in every important office (ministers, chief priest, the heir-apparent, and so on…).

It was only prudent for the king to ensure that none – neither friends nor foe – knew his plan of action beforehand. Since people don’t approach people because of love, but because of need, Kanika advises not to finish a task completely, but to ‘leave something to be desired for by others’.

This counsel is to be also found in chapter 137 of Apad Dharma Parva, when Palita tells Lomasha, ‘When a task has been completed, no one looks to see who did it. That is the reason all tasks should be left with a little bit still undone.’

In Kanika’s estimation, a king well-versed with statecraft was like a tree decked with flowers, but without fruit. Even if fruits were to grow, they must be out of the reach of people. Furthermore, the fruits should appear raw, even if they are ripe.

He who has not been afflicted with calamity can never experience prosperity, in Kanika’s estimation. For someone afflicted with a calamity, Kanika advised that such people be consoled with the recitation of the tales of Rama and Nala.

These were the tales that Yudhishthira would hear during the Pandavas’ exile! Both are present in the Aranyaka (Vana) Parva; Nala and Damayanti’s history is recounted in chapters 50-78, while Rama’s account is found in chapters 258-275.

A peace treaty with an enemy is no reason to become complacent. Kanika likened such a complacent person to someone sleeping at the top of a tree and liable to fall down upon waking up.

Alliances are a way for a king to gradually increase his power, just as a small fire, when fed with faggots (this word has another meaning, other than the offensive usage, and which means a bundle of sticks bound together), can consume even a large block.

With all these pearls of wisdom did Kanika conclude his counsel to Dhritarashtra. The king was left in a melancholy and pensive mood. Thus ended Sambhava Parva and the stage was set for the conspiracy to burn the Pandavas at Varanavata, and for Jatugriha Parva to begin.